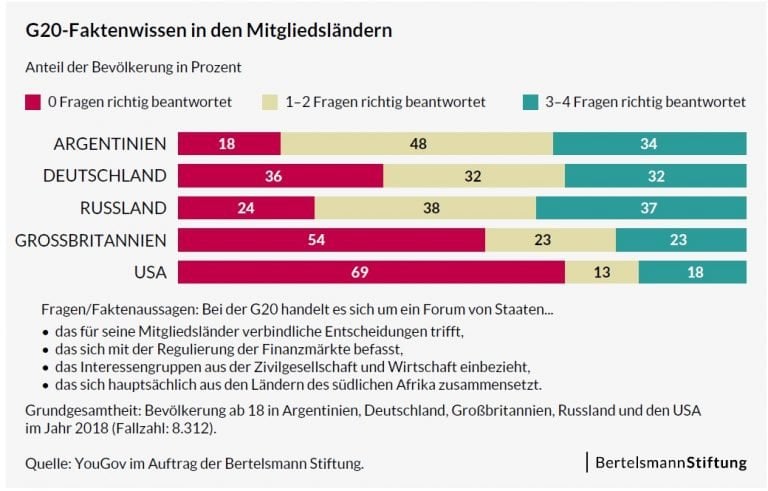 On 30 November, heads of state and government will meet in Buenos Aires for this year’s G20 summit to discuss common solutions for global challenges. Yet things currently do not bode well for international cooperation. From the Paris climate agreements to the UN migration pact, global cooperation is increasingly being eroded by nations acting unilaterally. However, an international questionnaire shows that the majority of citizens are calling for more courage in multilateralism.

Gütersloh (Germany), November 27, 2018. Together, not alone – this is what the majority of citizens in some of the most important G20 countries are calling for, according to a survey by the Bertelsmann Stiftung. The results for the five countries surveyed (Argentina, Germany, UK, Russia and the USA) show that overall, people are explicitly in favor of international cooperation to solve common global problems (83 percent). The highest approval ratings are in Argentina (91 percent), while the lowest are in the USA, where in any case almost three quarters (73 percent) of the citizens support cross-border problem-solving. Many even rate the global common good higher than their own national interests: 58 percent of all international respondents agree with the statement that cooperation is worthwhile, even if national interests need to take a back seat in the short term.

But the enthusiasm for international cooperation is not fully reflected with the G20. Overall, only 45 percent of those polled consider this forum of states positive. The most critical are the Germans: 41 percent of respondents in Germany say that the club “(probably) does not” contribute to global problem-solving. This bleak picture may also relate to the fact that the G20 rarely appears in public debate, and few know what the term G20 really means. Almost three quarters (74 percent) of respondents state that they have ever heard of the group of the 20 most important industrial and emerging economies. However, the responses to four basic test questions make it clear that there are some gaps in knowledge behind these statements. Only a few people can precisely describe how this forum works and is organized. But still, 27 percent of all respondents have a good basic knowledge of the G20 and can answer at least three out of the four questions correctly. 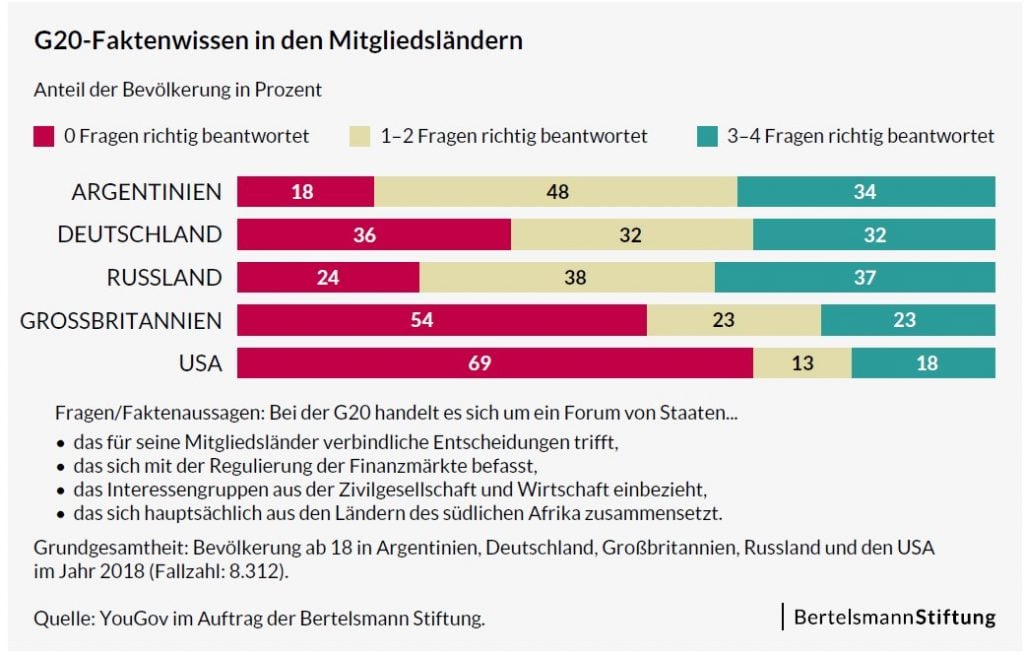 Globalization's Winners Are the Strongest Supporters of International Cooperation

The survey shows a clear correlation between the support of international cooperation and the assessment of globalization: “The more that people are convinced of the positive effects of globalization for themselves, the more they are in favor of international cooperation,” said Christina Tillmann, democracy expert at the Bertelsmann Foundation. Overall, 71 percent of “globalization’s winners” are of the opinion that short-term disadvantages for their own country are acceptable if the cooperation serves the long-term well-being of all countries. In the case of “globalization’s losers”, only half (47 percent) agree with this statement. This is reflected in many individual results of the survey, especially with regard to the G20. More than half of the “globalization losers” (58 percent) think rather negatively about the G20. Only nine percent among the “globalization winners” do so. “In cases where people are convinced that globalization only pays off for cosmopolitans or digital corporations, the acceptance of international forums for the shaping of global trade in goods remains low. The G20 members must prove that they do not cause the entrenchment of existing inequalities, but drive the fair shaping of globalization forward,” added Tillmann.

Germany: Home of the Multilateralists and the Biggest G20 Skeptics

The Germans, on the one hand, are clear supporters of international cooperation, but at the same time, they are the biggest G20 skeptics. With an approval rate of 85 percent, they stand among the strong supporters of multilateralism. The rejection of international organizations as a means of cooperation is the lowest in Germany at 11 percent. At the same time, one-third of Germans (33 percent) have a negative image of the G20 and 41 percent say that this forum does not contribute to solving global problems. These are the highest figures in this international comparison. 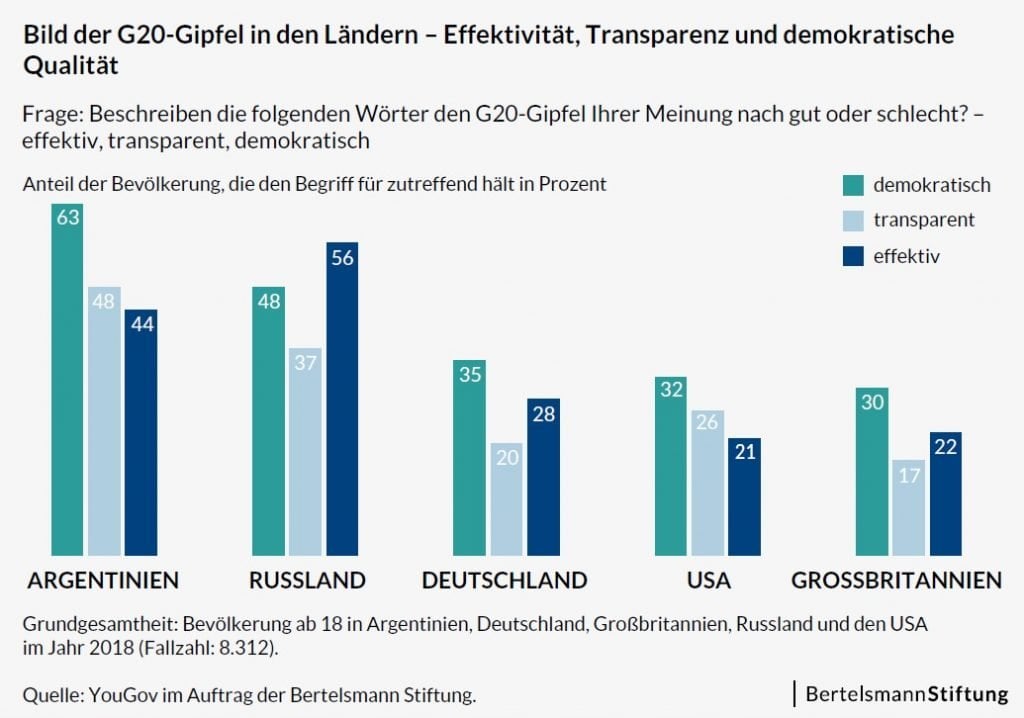 For the USA, two observations stand out. Support for international cooperation is the lowest by comparison, but still a majority, even among Trump voters. At the same time, Americans are the least familiar with the term G20.

At 73 percent, over two-thirds of US citizens still believe in international cooperation, even if that figure is the lowest in our country comparison. At the same time, few people in the US (52 percent) are willing to accept disadvantages for their own country for the benefit of the international community. But even among Trump voters the motto “America first” does not enjoy widespread acceptance. A relative majority (42 percent) of Trump voters are willing to accept national disadvantages for the sake of international cooperation. 36 percent cannot reconcile themselves with this. Another characteristic of US citizens is that the term G20 only draws questions from most respondents. 58 percent of them have never heard the term and two thirds (69 percent) cannot answer a single knowledge question about the G20 correctly. These are the highest figures for the respective countries. “The numbers clearly demonstrate that many Americans have barely dealt with international cooperation and the G20 until now. But therein lies the opportunity to launch a broad public debate and not leave the field to the nationalists,” says Tillmann. 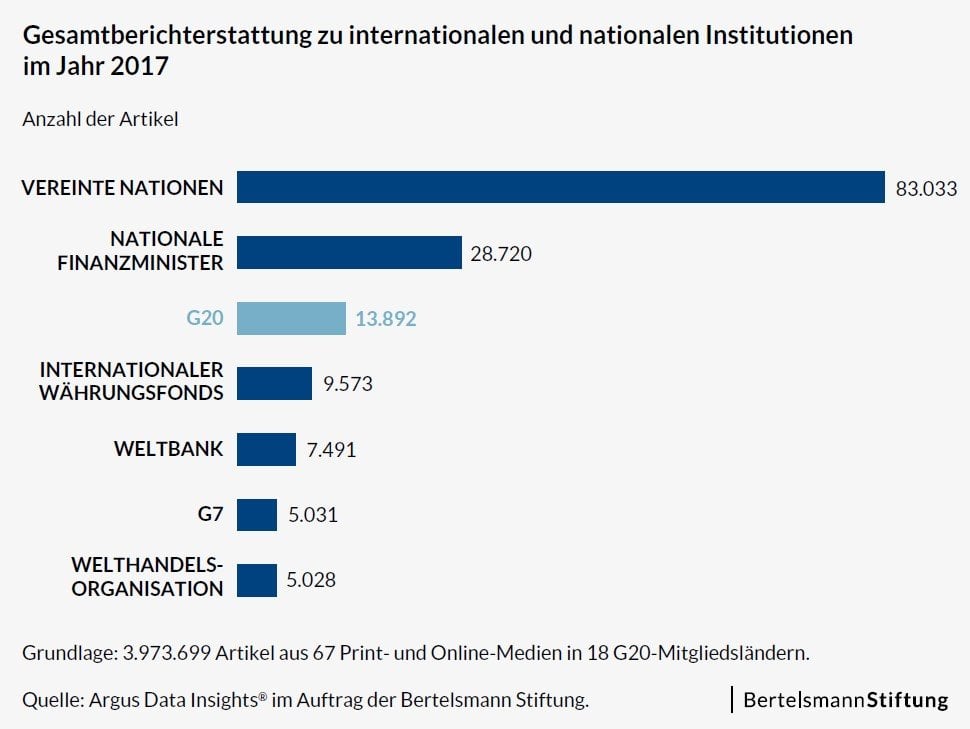 Argentina: A Guest among Multilateralists

Among the hosts of this year’s G20 summit, the approval of international cooperation knows no bounds: more than nine out of ten citizens (91 percent) want states to solve common, global problems together. Two thirds (67 percent) have a positive image of the G20. A clear majority (67 percent) also agree to accept short-term disadvantages in favor of the global common good. These statements are reflected in the high approval ratings for globalization: 73 percent of Argentines are convinced that globalization is good for them personally.

The G20 is a dialogue and coordination forum for the 19 leading industrialized and emerging economies and the EU. In preparation for the G20 summit in Argentina, the YouGov Institute conducted an online population survey in September 2018 on behalf of the Bertelsmann Stiftung in five G20 countries: Argentina, Germany, Great Britain, Russia and the USA. It is representative of the population over the age of 18 and had a total number of 8,312 respondents. A media response analysis conducted by Argus Media Insights for the year 2017 in 18 of the 19 member countries of the G20 serves as an additional basis. 3,973,699 articles from 69 print and online media were evaluated. No data was available for Turkey, so it was not taken into account.

The complete report, including graphs and tables, is available at www.bertelsmann-stiftung.de.

The Bertelsmann Stiftung is committed to ensuring that everyone can participate in society – politically, economically and culturally. Its goal is to improve education, shape democracy, advance societies, promote health, vitalize culture and strengthen economies. In doing so, we focus on people. This is because it is people who are able to move, change and improve the world. We develop knowledge, impart skills and develop solutions. The Bertelsmann Stiftung is a non-profit foundation established in 1977 by Reinhard Mohn. Additional information can be found at: www.bertelsmann-stiftung.de