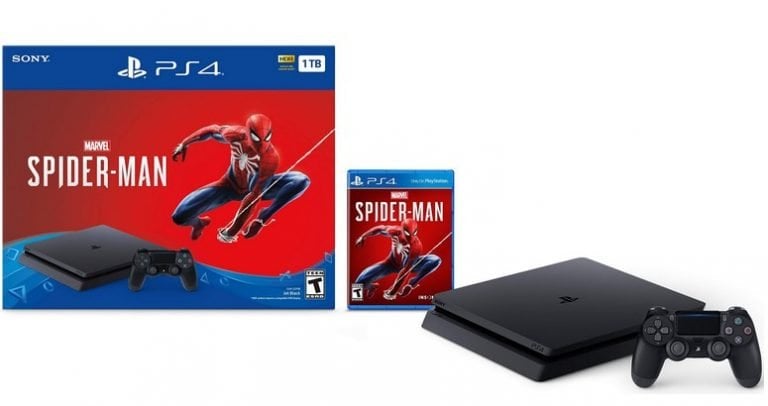 Sony PlayStation 4 Slim 1TB Spiderman bundle now only $199.99 with free shipping from Walmart, now available from Best Buy as well for $199, and from Amazon. You can also get a PlayStation Plus 12 Month Membership for only $39.99 [regular price $60]. See more deals from Amazon here, here and here.

You can get it for even lower by creating a new Walmart account and using $10 off promo code:  ELLEN10

Endless Entertainment: Something new and amazing is always in reach. Find what you’re looking for and get it at the touch of a button via PlayStation entertainment options like PlayStation Vue and more.

When a new villain threatens New York City, Peter Parker and Spider-Man’s worlds collide. To save the city and those he loves, he must rise up and be greater.

After eight years behind the mask, Peter Parker is a crime-fighting master. Feel the full power of a more experienced Spider-Man with improvisational combat, dynamic acrobatics, fluid urban traversal, and environmental interactions. A rookie no longer, this is the most masterful Spider-Man you’ve ever played.

Marvel’s New York is Your Playground

The Big Apple comes to life as Insomniac’s most expansive and interactive world yet. Swing through vibrant neighborhoods and catch breathtaking views of iconic Marvel and Manhattan landmarks. Use the environment to defeat villains with epic takedowns in true blockbuster action.

Buy it on Walmart right here