ValueWalk
Home Stocks Nevada Mining Rush Is Back On And It’s Not Gold! 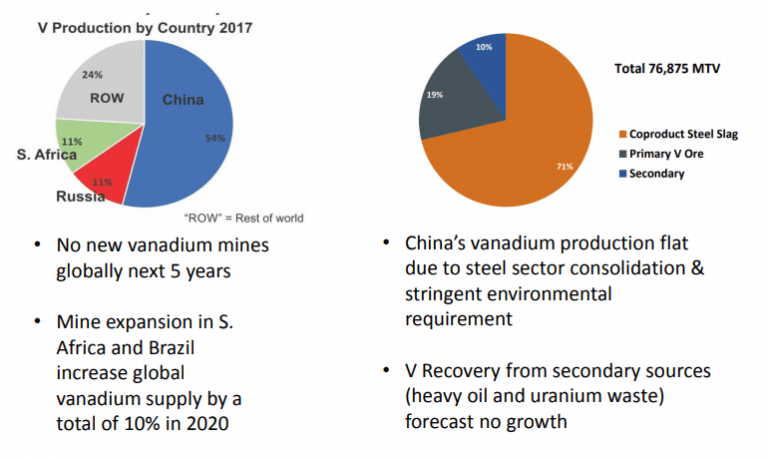 When it comes to vanadium, here are some pertinent facts of which you should be aware:

Nevada Gold Rush in the past, what’s the latest Fad?

The region of Nevada is one of the largest source areas of gold production in the world. Central Nevada precious metals rush started in the 1900s and brought hundreds of thousands of people from all over the world to explore gold and silver treasure. 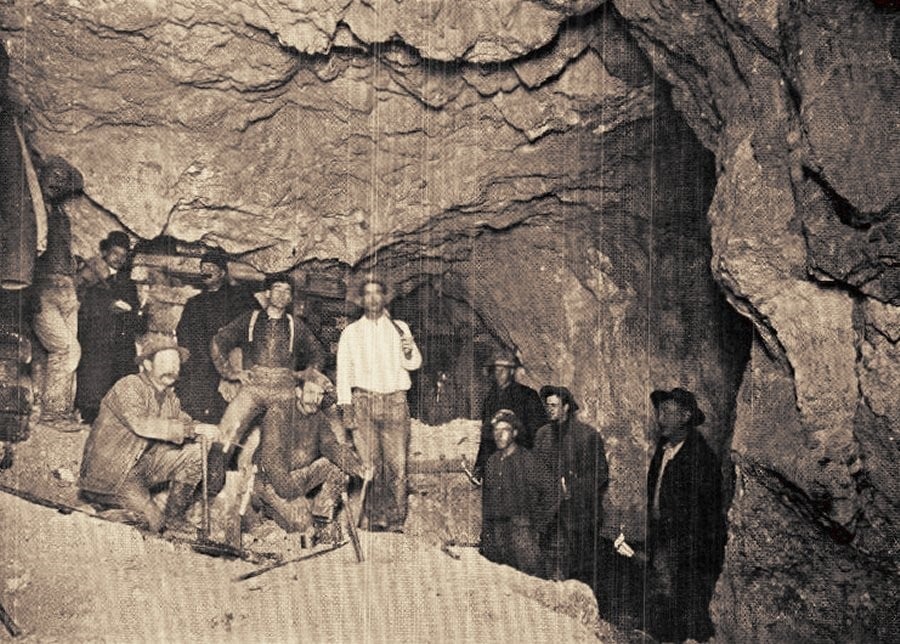 The legacy that was borne from this gold rush continues today with some of the world’s biggest mining companies, including Newmont, Barrick and Kinross, actively mining endowing the state with excellent mining infrastructure and expertise, a mining friendly regulatory environment, and skilled workforce.

While gold and silver mining are prevalent in the Nevada mining story, recently mining companies and investors have descended to Nevada in hunt and looking to striking rich with a niche metal: vanadium—a commodity that has gone up in price 1000% in less than 3 years.

Vanadium pentoxide price has reached an all-time high of $33.9/lb (www.vanadiumprice.com), up from 2016 low of $2.5/lb. This was due in no small part to the Chinese upgrade of vanadium intensity in steel re-enforcement bars in the construction industry, increasing vanadium use in the aerospace industry, and the use of large-scale vanadium batteries in the utility industry. 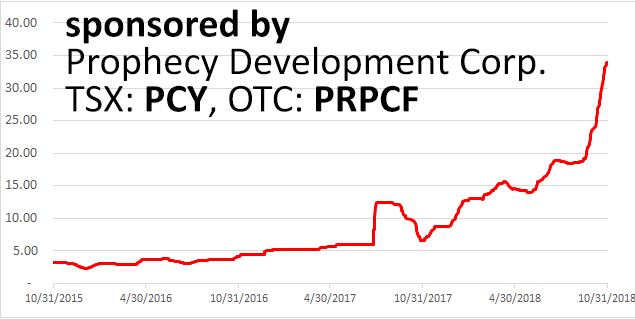 Vanadium Production by Country and Sources 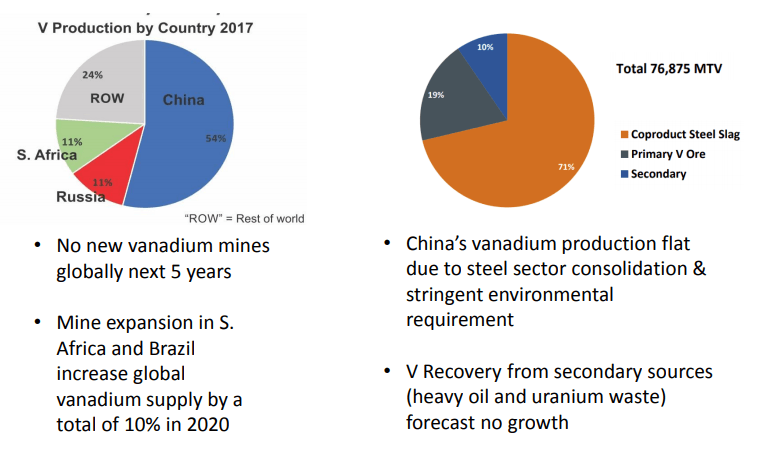 Legendary Mining Investor Robert Friedland, having invested $90 million in vanadium battery technology to the utility industry, calls vanadium “the modern miracle metal.” In an interview earlier , Mr. Friedland spoke positively about vanadium, commenting, “We think there’s a revolution coming in vanadium redox flow batteries. You’ll have to get into the mining business and produce ultra-pure vanadium electrolyte for those batteries on a massive scale.”

More than 70% of vanadium is produced as a steel by-product where by complex vanadium bearing iron ore are roasted in furnace at high temperature (1,000C) to produce vanadium stag which are then further refined.  The process is energy intensive, with large carbon emissions and difficult to permit in North America. 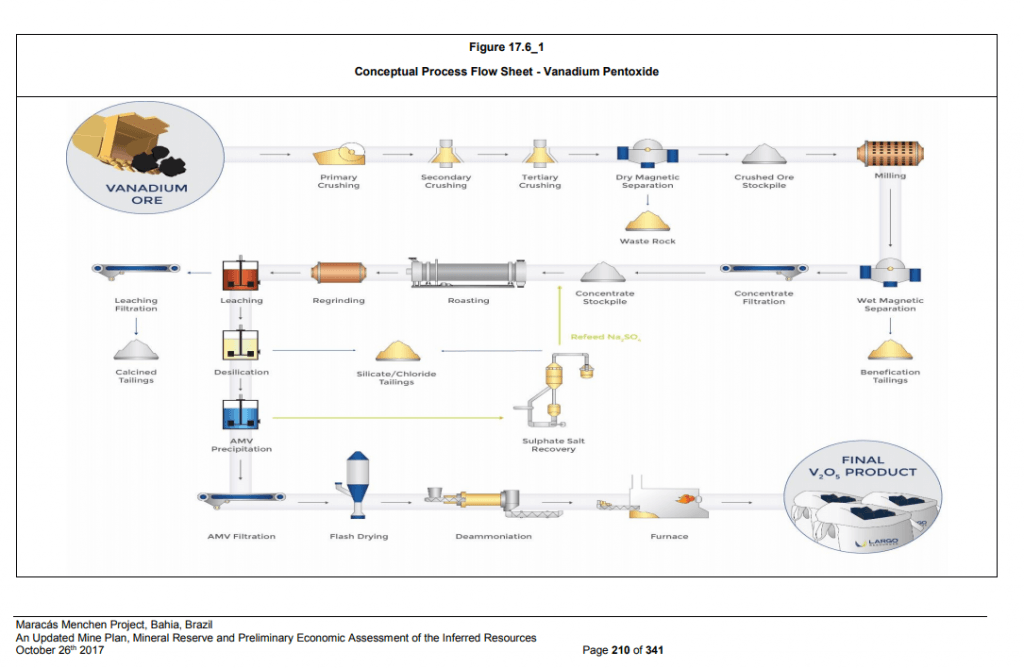 In this article, I will concentrate on primary vanadium deposits (also called black shale deposits) in the USA, which are not mingled with heavy iron and titanium metals, and therefore the vanadium could potentially be recovered by more environmentally friendly hydrometallurgical processes. And while there are some uranium mines in Colorado with vanadium by-product credits, their vanadium resources are relatively small and can be metallurgically challenging and as uranium deposits do not represent pure vanadium plays.

Which brings us to northern Nevada, and the largest known black vanadium resource in North America

* The Gibellini project attributes are taken from its May 29, 2018, PEA (preliminary economic assessment) which includes inferred resources that are considered too speculative geologically to have the economic considerations applied to them that would enable them to be categorized as mineral reserves, and there is no certainty that the PEA will be realized. Mineral resources are not mineral reserves and do not have demonstrated economic viability.

As a benchmark Largo Resources is presented herein, a TSX-listed vanadium producer in Brazil, which extracts vanadium from iron ore as the benchmark. 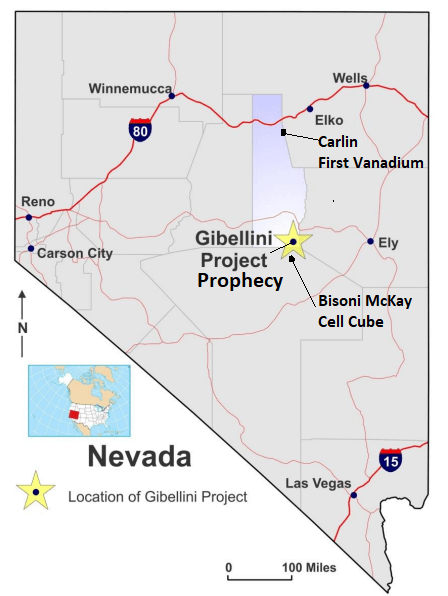 First Vanadium Corp, Prophecy Development Corp, and Cellcube Energy Storage Systems occupy projects on the same vanadium-bearing trend which spans an extent of over 180 miles. While all 3 projects have verifiable vanadium resources, Prophecy Development Corp’s  (TSX: PCY, OTC: PRPCF) Gibellini project has a completed historic feasibility study and contains the largest measured and indicated vanadium resource in the belt. Prophecy is the only company to have filed a Plan of Operation to the proper Federal branches, including environmental baseline studies in May 2018 (link), laying the groundwork for to a definitive path to production to become America’s first primary vanadium producing mine.

Race to be the First Major Vanadium Mine in the US

Prophecy has recently appointed Gerald Panneton as Prophecy’s (TSX: PCY) new President and CEO (Mr. Panneton was the founder and CEO of Detour Gold, a multi-billion dollar major gold producer in Canada, where he help raised $2.6 billion) and Prophecy is on a blazing trail due to prying a top gun from McEwen Mining Corp. to  permit arguably the most exciting vanadium project in the US. McEwen Mining is run by the legendary Rob McEwen, the ex-Chairman and CEO of GoldCorp Inc., one of largest gold-mining companies in the world.

Prophecy as recently appointed Ron Espell as VP, Environmental and Sustainability. One of his most recent accomplishments in Nevada is permitting the McEwen Mining’s Gold Bar Project.

Nick Hodge of the Outsider Club on Friday issued an alert to its subscribers with following highlights:

“An updated, 2018 PEA pegged the after-tax NPV at US$338.3 million and the IRR at 50.8%. Gibellini contains 129.28 million pounds of vanadium pentoxide (V205) grading 0.294%. The current mine plan envisions producing 9.65 million pounds annually for over 13 years, paying back its capital cost of US$116.8 million in 1.72 years. The after tax net present value of the Gibellini vanadium project is north of US$338 million, meaning Prophecy is trading at a significant discount to its project value.”*

That was all done at a vanadium price of $12.73 per pound. Vanadium prices are currently twice that.

Indeed, by looking at Largo’s production profile and valuation, Prophecy appears to have lots of upside potential.

* The Gibellini project attributes are taken from its May 29, 2018, PEA (preliminary economic assessment) which includes inferred resources that are considered too speculative geologically to have the economic considerations applied to them that would enable them to be categorized as mineral reserves, and there is no certainty that the PEA will be realized. Mineral resources are not mineral reserves and do not have demonstrated economic viability.

The Table comparing mining attributes of Gold Bar and Gibellini projects: Both projects are located in Nevada, USA. The Gibellini project attributes are taken from its May 29, 2018 PEA, which includes inferred resources that are considered too speculative geologically to have the economic considerations applied to them that would enable them to be categorized as mineral reserves. And there is no certainty that the PEA will be realized. Mineral resources are not mineral reserves and do not have demonstrated economic viability.

Certain statements contained in this news release (including statements which may contain words such as “expects”, “anticipates”, “intends”, “plans”, “believes”, “estimates”, and similar expressions) and statements related to matters which are not historical facts are forward-looking information within the meaning of applicable securities laws. Such forward-looking statements, which reflect management’s expectations regarding Prophecy’s future growth, results of operations, performance, business prospects and opportunities, are based on certain factors and assumptions. They involve known and unknown risks and uncertainties which may cause the actual results, performance, or achievements to be materially different from the future results, performance, or achievements expressed or implied by such forward-looking statements.