When allegations about accounting problems at Patisserie Valerie surfaced, they shocked the investing world, frustrating investors who felt they were “merely unlucky” in owning shares in a company with this type of problem.

However, not everyone thinks accounting fraud and bankruptcy risks appear without any warning. One analyst has compiled a report highlighting some warning signs of potential accounting problems and tests investors could carry out on companies they’re thinking about investing in.

U.K.-based café chain Patisserie Valerie has been under investigation since earlier this month. Investigators are looking into why the company issued millions of pounds worth of options to its executives without disclosures in filings. Trading on the company’s stock is suspended during the investigation.

According to multiple media outlets, officials arrested finance director Chris Marsh after the café chain suspended him and announced the possible accounting problems. He resigned late last week. U.K. authorities are also reportedly investigating another yet-unnamed executive in connection with the allegations. Shareholders are now calling for Patisserie Valerie’s board to be purged in what has been a rapidly-evolving case.

When fraud allegations arise, they generally do so without any warning, but Deutsche Bank analyst Luke Templeman claims it is possible to detect problems before anything appears. He highlighted well-documented cases such as Enron and Worldcom as examples.

He emphasized that about half of all accounting frauds involve the use of falsified revenues. Thus, the first test he suggests is the ratio of accounts receivable as a proportion of sales. He said if this metric is increasing, then it means the company in question isn’t getting cash for the sales it reports. He added that in some cases there could be legitimate reasons for it, but it’s also possible the company is recording sales while knowing it won’t ever get cash for them.

Examples of problems this metric could uncover include making up sales numbers and another “more elaborate ruse” like channel stuffing. Another potential problem that could be uncovered here is pulling revenue forward from future periods, although there can be legitimate reasons to do this as well.

Templeman also suggests using Benford’s law, which forensic accountants often use to identify fraud. In finance applications, he describes it as “recognizing the far higher incidence of the number one as the first digit of a number in financial statements, and then a lower proportion of the digit two, three, four etc.”

He notes that there are mathematical reasons for the number one to be dominant. However, contrary to that, studies have shown that when creating fraudulent numbers, people tend to distribute numbers more evenly. Thus, seeing an even distribution of numbers could be a red flag that further investigation is needed.

Templeman also pointed out that several financial officers have been found to be pulling out money that should have been paid to the tax authority. Most analysts don’t pay much attention to the tax provisions on a company’s balance sheet, which is why it can be a good place to hide money that’s being siphoned out. If questions do arise, finance officers often use the term “timing differences” as a sort of scapegoat because they are convoluted.

According to Templeman, tax provisions can be checked by disaggregating taxes payable and receivable and then comparing the numbers with sales. If the ratio between them is shrinking, then he sees it as a red flag because it looks like the company is paying taxes faster than before.

The Deutsche Bank analyst also points to a “classic trick” which can be identified by examining a company’s capitalized assets as a proportion of its total assets. Companies capitalize their expenses and show it on their income statement. Analyzing changes in this ratio over time can raise a red flag.

He emphasized non-current assets, especially those listed as “property, plant, and equipment, or ‘other assets.'” While some companies do capitalize assets into their current assets in one period and then unwind them in the next period, it is worth examining if this issue is noted.

Finally, he suggests the use of accrual ratios, which show whether companies are actually generating cash or only reporting paper profits. These ratios can be tricky because over the last two years, cashflows have declined from approximately 200% of profits to 180 percent. However, he adds that the declining cashflow rate has begun to flatten in the last couple of quarters thanks to improving growth in cashflows rather than slower growth in profits. 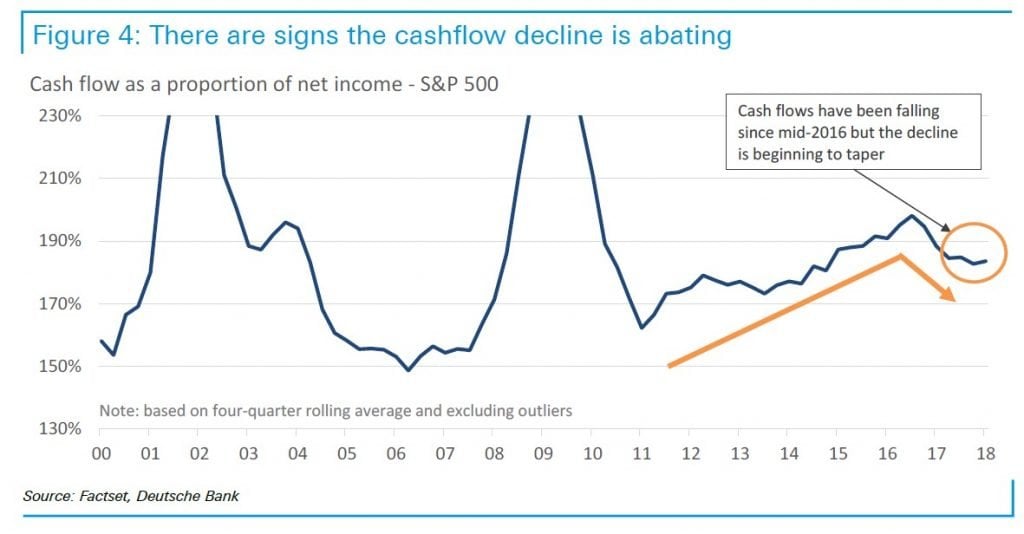 Templeman suggests that investors consider accrual ratios to be a red flag if a company is reporting a much higher level of paper profits than other similar companies.