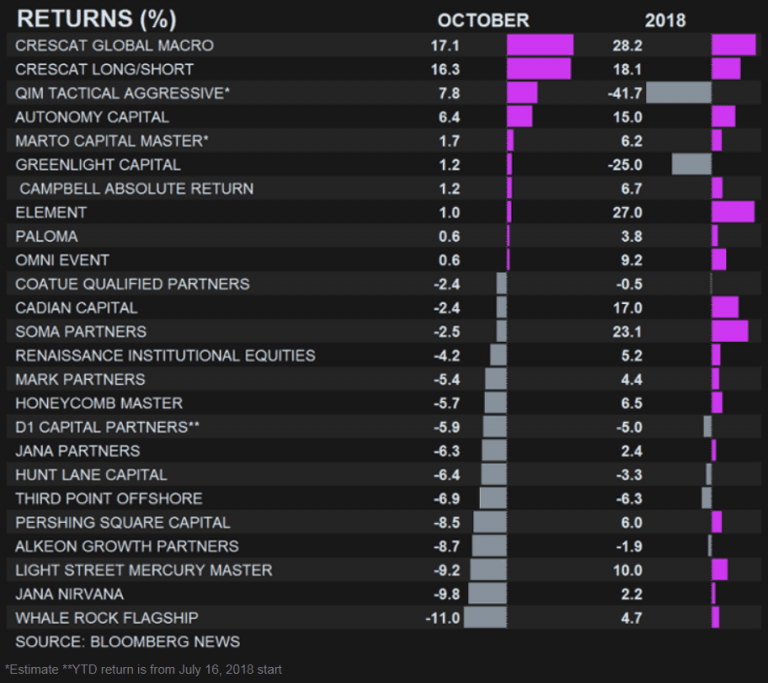 Crescat Capital commentary for the month of October 2018, discussing the performance of Crescat’s hedge funds.

October was a frightening month for investors around the world. From Hong Kong to New York, stock markets were slammed by a wave of fears about slowing growth, trade wars, and higher interest rates. The Nasdaq took the brunt of the damage. Stocks like Amazon and Netflix both lost around one-fifth of their value as the Nasdaq Composite tumbled 9.2% in October. That’s the biggest monthly drop for the Nasdaq since November 2008. The S&P 500 Index lost 6.8% in October, its worst month since September 2011. The pain was equally bad in overseas markets which were already slumping because of weaker economic growth along with rising trade and geopolitical tensions. Hong Kong and Chinese stocks sank deeper into a bear market in October as China’s trade conflict with the US intensified.

Crescat's hedge funds capitalized on the turmoil in October and climbed to the top of the US hedge fund performance tables for the month and year as compiled by Bloomberg Hedge Fund Brief:

Our mission is to protect and grow wealth by capitalizing on the most compelling macro themes of our time. We do this by deploying proprietary value-driven models to develop tactical investment themes. Our global macro themes permeate all our investment strategies. Our goal is high absolute and risk-adjusted returns over the long term with low correlation to benchmarks.

Today, our three highest conviction macro ideas and portfolio exposures continue to be:

It was just two months ago that the US stock market hit all-time high valuation multiples across eight different measures that we have been featuring in our quarterly letters. Our macro model is signaling that a cyclical bear market in US stocks remains in the early stages of developing with much further to play out over the next one to two years. We remain fundamental bears on US equity and high-yield credit markets. Corporate leverage is at record levels while credit spreads are near all-time lows. It is late in the economic cycle with the Fed continuing to remove liquidity from markets by raising interest rates and unwinding its balance sheet. With many global stock markets already in bear territory, US markets are finally showing signs of cracking. Now is a great time to be short overvalued US stocks such as those identified by Crescat’s fundamental equity model. That is how Crescat's hedge funds remain positioned currently. Our global macro fund also continues to be short high yield bonds through put options on select ETFs.

A global macroeconomic downturn is already in motion with the unwinding of record debt-to-GDP bubbles globally. China, the largest credit bubble ever based on our analysis, is already in a full-scale credit bust with the median Chinese-listed equity recently down almost 40% from its 12-month high. We believe China is already in a serious recession despite popular fiction regarding its positive reported GDP numbers that omit losses on bad debt. Chinese stocks have already lost over $5 trillion of market value since January of this year, about 26% of GDP. Yet, no commensurate value of bad debt has been marked down yet. By comparison, in 2008 when US stocks had lost a similar proportion of GDP in market value, the US economy was already in deep recession. China is almost certainly in recession now.

As we have been writing about for several years now, China’s GDP has been vastly overstated due to the lack of write-downs of its non-performing loans. By our estimates, bad loans today still on the books of Chinese banks could be as much as $8 trillion, 60% of its GDP and about four times the book value of equity in its banking system. These are insanely large numbers that portend systemic bank runs and social unrest. The Chinese economy has been a failed experiment in Ponzi finance. China can no longer fool the world regarding its GDP growth. The result is an historic credit bubble that is finally bursting under its own weight. The Trump trade war has been just one of the many catalysts for the burst, but it is not the root cause of it. The cause was excessive bank credit expansion along with the continued rolling over of bad debt. That playbook is now coming to an end with a dramatic slowdown in China’s M1 and M2 growth proving that its credit expansion is unsustainable. China is now experiencing its time of economic reckoning, its Minsky Moment. The Chinese banking imbalances are so large that it is too late to undo the bursting of the credit bubble regardless of the direction impending trade negotiations with the U.S. take. China is careening towards the inevitable: its central bank will soon have no choice but to print record new levels of yuan (M0) to bail out its banks and attempt to quell social unrest. Like other economic collapses of centrally-planned, totalitarian communist countries, we continue to expect that the Chinese currency will plunge as money printing and capital flight accelerates.

In our global macro fund, we remain short the Chinese yuan through put options laddered out in different durations. The yuan short has contributed to the fund’s strong performance year to date, but we haven’t seen anything yet in terms of our expected return from a coming yuan plunge. We also have significant short exposure to “the other Chinese currency”, the Hong Kong dollar, structured similarly through laddered put options to play a likely de-pegging of that currency. HKD presents an extreme asymmetric risk/reward investment opportunity to profit from yet another huge credit imbalance in the world today. Hong Kong has the largest credit-to-GDP gap and debt service ratio of all countries tracked by the Bank for International Settlements. The BIS considers each of these important early-warning indicators for banking and currency crises. Hong Kong is part of China, and therefore part of China’s credit bubble. It is China’s financial hub with the rest of the world and has its own housing and banking bubbles. Its financial markets are already being swept up in China’s economic crisis. We expect the Hong Kong dollar to de-peg and devalue as China’s credit bust continues to play out and Hong Kong is further absorbed politically and economically by China.

With a decade of money printing and interest rate suppression in the wake of the global financial crisis, central banks have created truly record global debt and financial asset bubbles. At the same time, they have created a corresponding record low valuation of global above-ground gold holdings relative to fiat money. The depressed gold price relative to the of high cost of finding and extracting it has wreaked havoc on the mining stock fundamentals. It’s been a seven-year free cash flow and stock price drought. Declining industry-wide capital investment over this period has created a steady decline in new gold discoveries leading to “peak gold” production fears that have large miners scrambling to acquire new in-the-ground reserves. Gold and silver miners represent historic deep value today according to Crescat’s fundamental equity model at a time when the broad competing stock market is at record fundamental valuations. Already activist hedge funds are taking note and industry consolidation is underway which has been benefiting several of Crescat’s gold and silver mining holdings. We strongly believe it is poised to be one of strongest performers in the coming months and quarters.

Why? Because we expect gold and silver to soar at the first hint of the end of Fed rate hikes which we believe is just around the corner and much sooner than priced into the Fed Funds futures curve today. The Fed has already been raising interest rates for three years now trying to lead the world out of global central bank life support, but it is hamstrung. Its tight monetary policy has already served as a key catalyst to burst global debt and financial asset bubbles in China and other emerging markets. Meanwhile, the Fed’s tightening has likely not been enough to fight rising real-world inflationary pressures at home. As record over-valued financial asset bubbles burst, it is likely that the Fed will stop raising rates soon. Next, it would likely end its balance sheet reduction, reduce rates, and re-engage in QE. The end to rate hikes will come first and the signal to watch for that will be a drop in the Fed Funds futures curve. It’s already been slipping in recent weeks.

We take issue with the economists and market prognosticators who say we shouldn’t be concerned about a coming recession anytime soon because the Fed hasn’t inverted the Treasury yield curve yet. For those who obsess over the need for an inverted yield curve to signal a coming financial collapse and recession, be advised that the Fed has already inverted the global yield curve today, just as it did ahead of the last two U.S. stock market crashes and recessions. See our chart below. 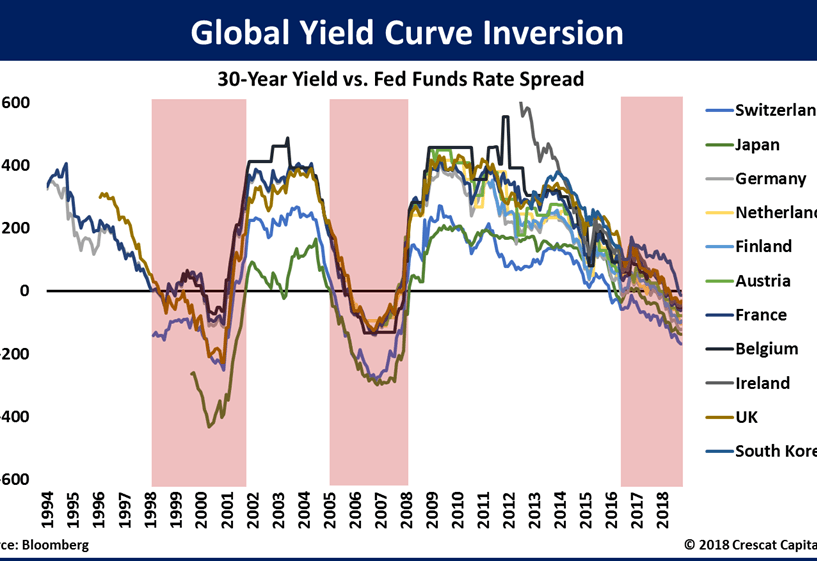 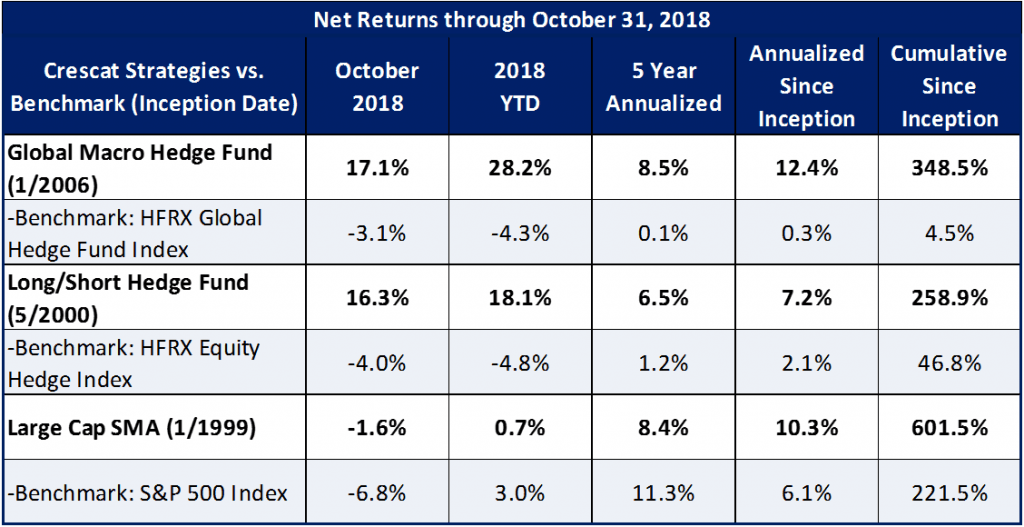 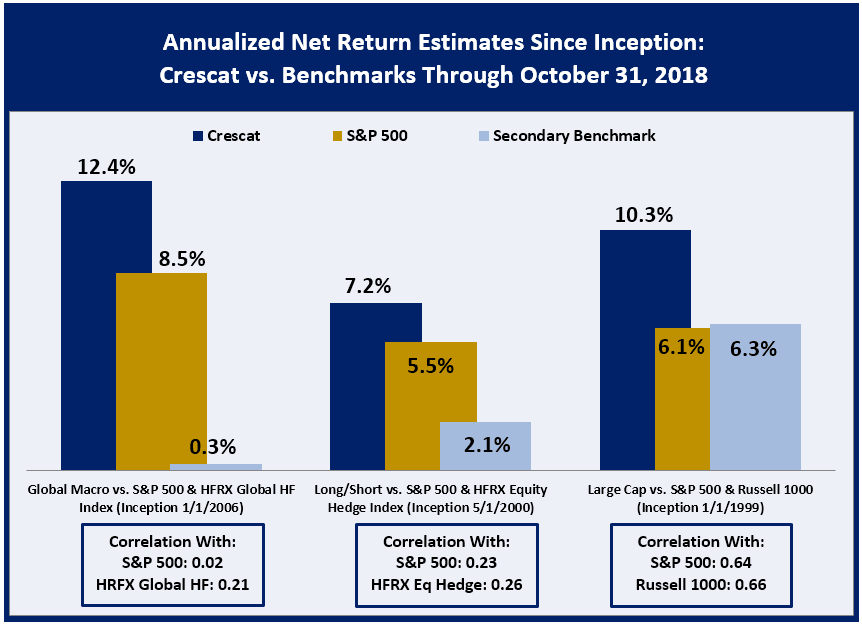 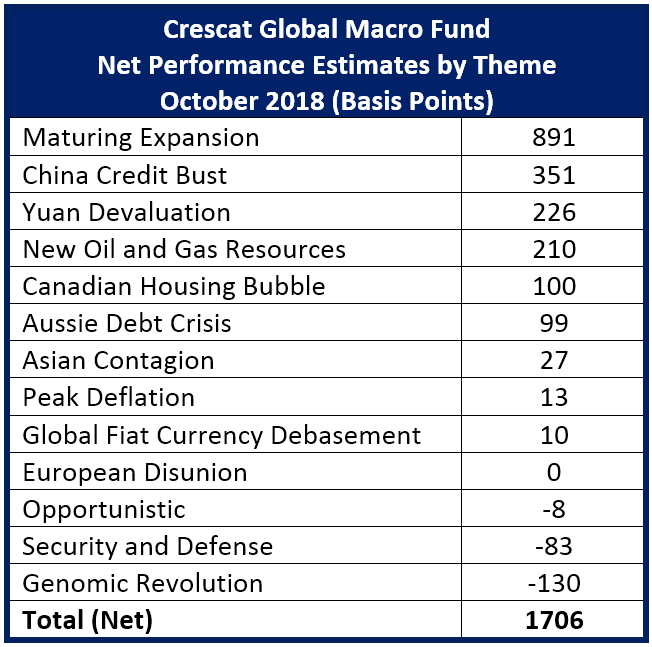 We think it’s a great time to invest in tactical global macro strategies like Crescat’s that have a proven history of strong performance during previous times of market turmoil as well as strong overall long-term performance through complete business cycles. We urge all investors to consider making an investment allocation to Crescat and we stand ready to answer questions or discuss themes.