ValueWalk
Home Info-Graphs The Most Fearful When It Comes To Starting A Business: Greece, Cyprus... 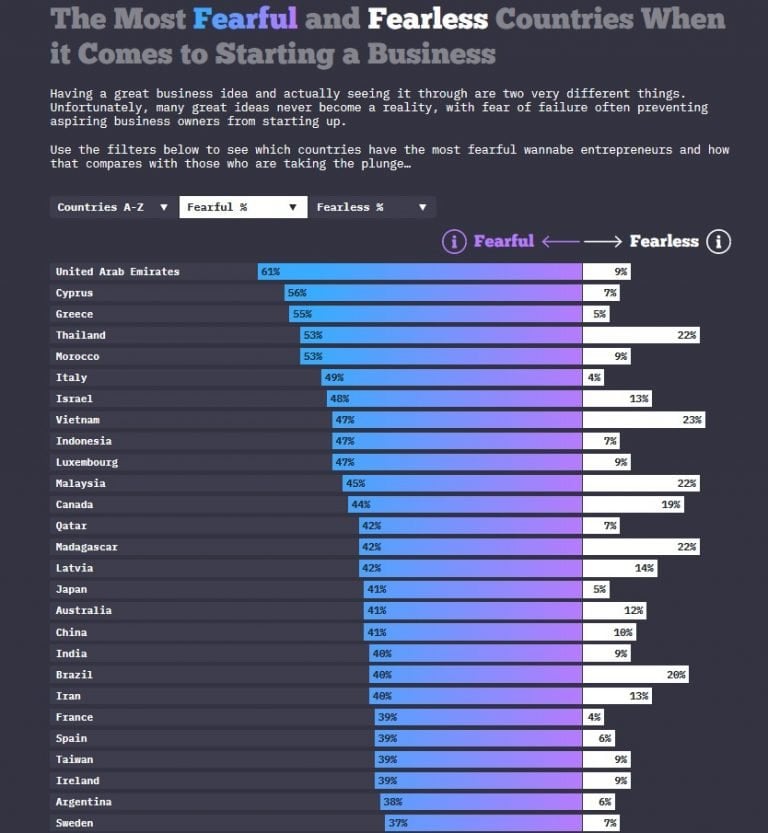 Leaving a steady-paying job to start your own business can be daunting. It takes a lot of bravery (and maybe a touch of madness) to make that leap of faith. While many people have great business ideas, relatively few people actually put them into action and launch their own startups, with fear of failure often preventing aspiring business owners from starting up.

The graphic below shows which countries have the most fearful aspiring entrepreneurs and how that compares with those who are taking the plunge into the business world.

The most fearful country when it comes to starting a business is the United Arab Emirates with a whopping 61% of 16-64 year olds citing fear as the main reason they wouldn’t start a business. This is surprising as setting up a business in the UAE is relatively easy; it only takes eight days and six simple steps to establish a company in the UAE. For those brave enough to make that leap of faith into the business world, some of the top industries to invest in at the moment are construction, hair & beauty and real estate agencies.

In the US, the American dream is built on the spirit of entrepreneurship, however 33% of 18-64s said that the fear of failure would stand in the way of them from starting a business. While the proportion of startups that fail is relatively high, business failure rates overall are actually in a pattern of long-term decline. According to Entrepreneur, the rate at which US startups have failed has fallen by 30 percent since 1977.

For those who do have the entrepreneurial bug, industries experiencing disruptive technological advancements are ripe for the picking. According to a report from inc, which looked at data on the fastest-growing sectors, industries including beauty tech and eSports are the best industries for starting a business in 2019.

In the UK, 36% of people indicated that the fear of failure would prevent them from starting a business. But this clearly hasn’t stopped everyone as the UK achieved Europe’s highest growth for startups, across all industries, over the last 5 years. However, Greece, Cyprus and Italy are notable for being the most fearful when starting a business. All these countries have had economic recession for several years, so which came first the chicken or the egg? We will let readers decide that.

Ecuador on the other hand, came out as the most fearless country when it comes to starting a business with 30% of 18-64s listed as new entrepreneurs. This was closely followed by Guatemala, with 25% of the population listed as new entrepreneurs. These two might not be the first places you’d think of starting a business in, but due to the lack of formal job opportunities, Ecuadorians and Guatemalans are often spurred on to create their own opportunities by developing new and innovative businesses.

Below are the most fearful and fearless countries when it comes to starting a business. Check out the full interactive graphic here.