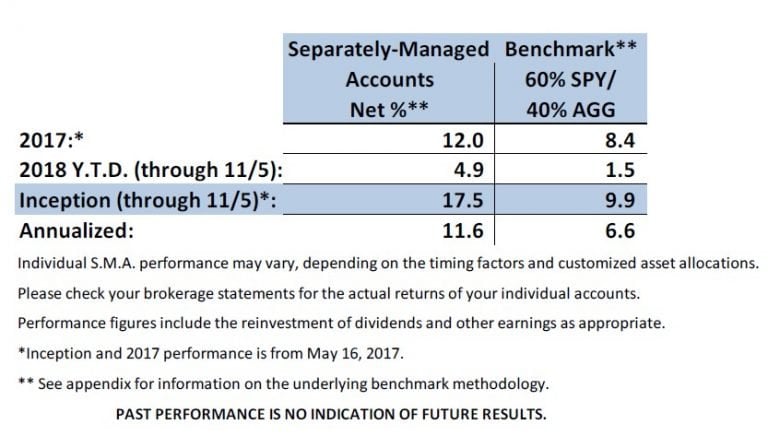 In April of last year, Barac Capital began offering separately-managed-accounts (S.M.A.) and the offering has been very successful (with assets in these accounts growing to substantially exceed those of the Barac Value Fund, L.P.; the “Fund” or “Partnership”). I started offering the S.M.A.s in order to address some of the inherent disadvantages of a hedge fund structure. While I continue to believe that the Fund’s terms were very attractive (within the confines of a hedge fund structure), there were still a number of inherent drawbacks for many investors, including:

Because the S.M.A. offering addressed these issues and is inherently advantageous (for investors), relative to an investment partnership, I saw little on-going incentive for an investor to choose the Fund over this alternative relationship. As such, on October 16th the dissolution of the Fund was completed and the assets of the Partnership were distributed into the S.M.A.s of the limited partners.

Importantly, the Fund was dissolved in a tax efficient manner that didn’t crystallize the unrealized gains of the Partnership (via a dissolution in-kind). The time and administrative tasks required to complete this in-kind distribution was substantial (relative to what would have been required for a liquidation), but the relative tax benefits it provided to the limited partners was well worth the effort.

There has been considerable volatility in the equity market in October and the S.M.A. performance data for this report will also incorporate that period (with performance reporting through yesterday’s market close). Also, because of the larger than normal reporting range for this quarterly report (from May 2017 through yesterday’s market close) -- and the number of different positions that have impacted performance during different periods within that range -- this report will not include any commentary on individual positions. Such commentary will resume with the next quarterly letter (for the quarter-ending December 2018).

The aggregate net returns (after the deduction of fees and expenses) for the Fund since inception (on July 14, 2011) to the last business day prior to dissolution (October 15, 2018) amounted to 90% on a net basis (after management fees), compared to 84% for the Partnership’s benchmark1.

The aggregate performance of Barac Capital’s S.M.A.s has been particularly strong, with net returns (after all fees and expenses) of 17.5% (11.6% annualized) versus 9.9% (6.6% annualized) for the benchmark, resulting in 760 basis points of outperformance in less than a year-and a half. Since inception, the aggregate performance of the SMAs has also outperformed both the benchmark’s equity and bond subcomponents2, despite the conservative positioning of the accounts.

I’m particularly pleased with the outperformance of the S.M.A.s versus the domestic equity benchmark3, considering the conservative positioning of the accounts. Given my cautious view on the equity markets since the inception of the S.M.A.s, these accounts have consistently held cash and/or Treasury bond balances that have exceeded 40% of assets.
Apart from conservatively holding substantial cash and/or Treasury bond positions, it is also important to re-state that returns were generated without leverage (either direct or effective leverage through options) and without taking highly concentrated positions.

The recent market sell-off has increased the attractiveness of the markets but it hasn't been substantial enough to change my overall cautious view and needs to be put into the context of the massive gains that have still been made over the past two years. I do remain generally cautious with regard to “risk assets” (stocks and corporate bonds) and this continues to be more a result of market risk factors rather than concerns with respect to current equity valuation multiples.

The reasons for this caution are the same as those explained in the last quarterly letter. As we approach full employment and some of the government’s pro-growth policies come into effect, there is a heightened risk of wage pressure and increased interest rates with increased inflation. Furthermore, current valuations appear to incorporate little with respect to geo-political risks at a time when there is much political change and uncertainty. It also warrants keeping in mind that if/when the business cycle does turn (and assets prices fall), a resulting “reverse wealth effect” could exacerbate the impact of a cyclical downturn.

For all of these reasons, the S.M.A.s remains more defensively positioned than their benchmark (which, itself, reflects a conservative asset allocation). This is reflected in the fact that 47% of the aggregate S.M.A. assets are either in cash or U.S. Treasuries with maturities less than 5 years. This is an aggregate number and individual asset class allocations can vary from client-to-client, depending on individual investor risk-tolerances.

To be clear, the defensive positioning of the S.M.A.s remains in place in order to mitigate against market risks and not based on the expectation for an imminent fall in equity prices. In fact, I believe that the current uptrend in the equity market could continue for a while. Furthermore, I continue to believe that the S.M.A. holdings include idiosyncratic value opportunities (for specific stocks) that are superior to those of the equity markets as a whole.