ValueWalk
Home Business 1,000 Whitney Tilson’s Devotees Come To Hear Him In Asia As 50%...

1) I just got back from a great week in Asia – two days each in Shanghai, Singapore and Hong Kong, teaching various investing seminars. What an incredibly vibrant part of the world – and such a hunger to learn about investing!

The highlight was an amazing event that WallStreetCN.com organized last Sunday (Oct. 14), in which I gave a 90-minute presentation on Investing, Business and Life Lessons by Warren Buffett and Charlie Munger. 1,000 people registered – they had to turn half away – and a half-million watched via livestream. My slides are posted posted here, pictures are here, and the 2-hour, 47-minute video (including a panel discussion afterward) is posted here (if that link doesn’t work, try this one). 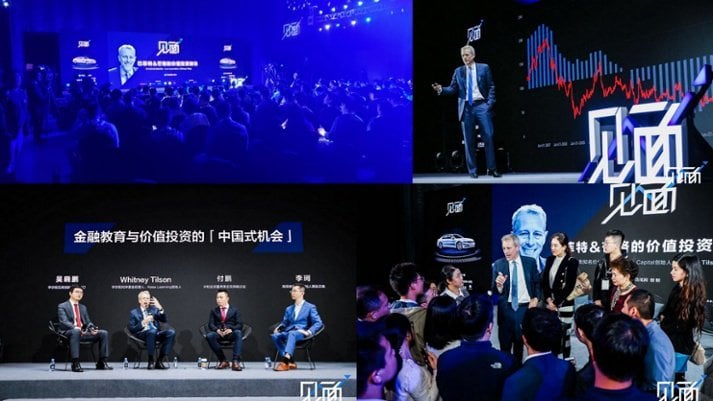 From its peak in January, the Shanghai stock market is down more than 25%, which was great news I told the audience because either they are: a) speculators, in which case their losses will hopefully wake them up to the error of their ways (which is what happened to me early in my career); or b) investors, in which case they should be delighted to buy the stocks of quality companies they’ve identified at lower prices.

3) Speaking of China, here’s an interesting article about a likely tech bubble: In China, a Dot-Com Déjà-Vu. Excerpt:

Welcome to the land of ‘unicorns’ and super-cheap meals. The rewards are rich, as are valuations. And the risks are rising. How it will play out depends upon whom you ask.

We’ve seen it before: the crazy spending, the stratospheric valuations. Twenty years later, it looks like the dot-com boom all over again, but this time the players are much bigger—and Chinese.

A Beijing-based startup that lets consumers order coffee via smartphones raced into so-called unicorn territory—a $1 billion valuation—in seven months from launch. The value of another firm, billed as an “Uber for trucks,” has soared to 300 times 2017 revenue; Uber Technologies Inc. itself is worth only about 10 times revenue.

But where some investors see dynamic exuberance, others see a market increasingly threatened by a confluence of forces including onerous domestic regulations and global trade tensions. The biggest risk? Another dot-com reckoning, the Chinese version of a cycle that erased billions of dollars of value from America’s tech sector in the 2000s and chilled tech investment for years.

There are already signs of such a shake-out as China’s publicly traded tech companies were buffeted this past week by a global tech-stock selloff and jitters from the escalating trade spat between Beijing and Washington. While the broad Shanghai Composite was down 7.6% this past week, the tech-heavy Shenzhen market lost 10.1%.

4) And speaking of tech bubble insanity, on the flight home from Hong Kong I read Disrupted: My Misadventure in the Start-Up Bubble, which I enjoyed immensely. (Ironically, just a few months ago I became a HubSpot customer (this email is sent from it) and am very satisfied. A far more user-friendly service than Salesforce.com I’ve heard.) Excerpt:

For twenty-five years Dan Lyons was a magazine writer at the top of his profession--until one Friday morning when he received a phone call: Poof. His job no longer existed. "I think they just want to hire younger people," his boss at Newsweek told him. Fifty years old and with a wife and two young kids, Dan was, in a word, screwed. Then an idea hit. Dan had long reported on Silicon Valley and the tech explosion. Why not join it? HubSpot, a Boston start-up, was flush with $100 million in venture capital. They offered Dan a pile of stock options for the vague role of "marketing fellow." What could go wrong?

HubSpotters were true believers: They were making the world a better place ... by selling email spam. The office vibe was frat house meets cult compound: The party began at four thirty on Friday and lasted well into the night; "shower pods" became hook-up dens; a push-up club met at noon in the lobby, while nearby, in the "content factory," Nerf gun fights raged. Groups went on "walking meetings," and Dan's absentee boss sent cryptic emails about employees who had "graduated" (read: been fired). In the middle of all this was Dan, exactly twice the age of the average HubSpot employee, and literally old enough to be the father of most of his co-workers, sitting at his desk on his bouncy-ball "chair."

This was one of many brilliant parts, from a chapter entitled The Ron Burgundy of Tech:

Imagine Joel Osteen pumped up with human growth hormone. Imagine there’s a secret government lab where scientists have blended the DNA of Tony Robbins with the DNA of Howard Hill, the aw-shucks shifty salesman from The Music Man. Imagine a grizzly bear in a pin-striped suit, standing on his hind legs and talking about changing the world through disruptive innovation and transformation.

If you can imagine those things then you can almost imagine the horror of seeing Marc Benioff, the billionaire founder and CEO of Salesforce.com, on stage at his company’s annual conference, Dreamforce.

…Here in the main auditorium of the Moscone Center, thousands of people who sell things over the Internet are standing up and cheering for him as if he’s some kind of superhero.

The whole things makes me depressed, in part because Benioff is a buffoon, a bullshit artist, and such an out-of-control egomaniac that it is painful to listen to him talk. He lives in Hawaii and signs his emails “Aloha.” He’s a Buddhist and hangs out with Zen monks from Japan, and he gave his golden retriever the title “chief love officer” at this company. He is the Ron Burgundy of tech. He and this conference are the essence of everything that has gone wrong in the industry.

4) Sears was a melting ice cube to be sure, but Eddie Lampert took a blowtorch to it in one of the all-time acts of hedge fund folly, as I note in this WSJ article: Edward Lampert, the Hedge-Fund Star Who Bet on Sears, Is Unrepentant. Excerpt:

“He bet his entire career on one stock. What on earth does he know about running a retailer?” said Whitney Tilson, a former hedge-fund manager who closed his own fund in 2017 after poor returns. “It’s exhibit A of hedge-fund hubris. This is a case study I will teach in my seminars for years.”

I know well from my own experience how great success can sow the seeds of one’s downfall – which is exactly what happened here.

The bankruptcy filing is the beginning of what will certainly be a huge, lengthy, expensive process in which stiffed debtors will sue for fraudulent conveyance (among many other things Lampert did that look very bad, especially with the benefit of hindsight).

Check out this chart, which shows that Sears has been losing well over $1 billion per year consistently for the last five years – yet investors kept getting sucked into this ultimate value trap all the way from $60 to zero:

Here’s another article about this debacle: Edward Lampert’s Non-Strategy to Save Sears. Excerpt:

For many years, it was a favorite corporate guessing game: What is Edward Lampert’s ultimate plan to reinvigorate Sears? It’s time to consider the possibility that he really didn’t have one.

A reading of Mr. Lampert’s 15 annual chairman letters suggests he believed he could outmaneuver rivals he considered bloated overspenders. The hedge-fund veteran formed Sears Holdings, the 2004 marriage of Sears and Kmart, when the company had $55 billion in revenues, rivaling Target Corp. and dwarfing Macy’s Inc., but spending far less on store remodels or other expansion.

Amazon.com Inc. has reshaped retail in the years since, forcing retailers to retrench, many turning to strategies that require hefty investments in online shopping tools and pricey upgrades to physical stores.

“Eddie came into the job with the view he was going to run a retail business his own way, and he did not believe in the conventional wisdom,” said Mark Cohen, a former chief executive of Sears Canada and marketing chief at Sears. “It didn’t work.”

And one more: Hedge Fund Billionaire Rode the Worst Trade of His Life All the Way Down. Excerpt:

Michael Dell, David Geffen, George Soros, the Ziff brothers -- by 2012, all of them, and many more, had peeled away.

Not even Lampert’s friends could understand why the hedge-fund manager, once hailed as a young Warren Buffett, clung to his spectacularly bad investment in Sears, a dying department store chain.

Granted, other hedge-fund titans have blown it, from Julian Robertson with US Airways to Bill Ackman with Herbalife. But few have ridden a disaster so publicly, over so many years, with such an iconic brand. It was hubris, many now say, and a failure to follow the investor commandment: get out in time.