This month Preqin brings you the latest trends in venture capital and private equity funds with Q3 2018 quarterly updates.

As industries mature, they typically follow a life cycle where new entrants come into the market, competition increases, efficiencies are created, margins tighten, and it becomes a challenge to maintain growth and profitability. General partners have seen this phenomenon in their portfolios as acquisition prices are near all-time highs and generating value requires hard work and hands-on operating involvement. One aspect of the private equity model that has largely avoided margin pressure has been the general partner compensation structure. Over the years, depending on the strength of the fundraising market, leverage on negotiating terms has swung back and forth between limited and general partners. While the pendulum has swung both ways, it has generally fallen in favour of the general partners, particularly those with strong track records. However, over the last several years we have seen limited partners picking their spots and finding creative ways to reduce their fee burden.

While the traditional 10-year fund with a 2% management fee and 20% carry remains the standard for buyout funds smaller than $2bn, we are increasingly seeing both GPs and LPs consider alternative structures. These alternative structures may be fee or carry discounts to entice early closers into a fund or a trade-off of lower management fees in exchange for premium carry. Access to reduced fee and carry co-investments has also become commonplace as investors seek to average down their fees through these one-off direct investments. In all cases, we tell our clients that terms do not drive a successful capital raise. Even terms beneficial to LPs can be detrimental to a fundraise if those structures are difficult to explain to an investment committee or might be perceived as misalignment of interests. Solid performance, a differentiated and repeatable strategy and a stable team will always be the first consideration for an investor. Once the box is checked on these factors, then terms will be considered. Below I address three trends: discounted fees, premium carry and the more recent phenomenon of extended fund life terms.

Rarely does a week pass when there is not a news story about investors claiming they pay too much in aggregate fees to private equity managers. These stories are often motivated by investors that face political pressure and do not take into consideration the most important measures of performance – net IRR and net multiple of invested capital (MOIC). On a net basis, private equity managers have continued to widen the gap between private and public equity markets. When rebased to 100 as of 31 December 2000, the Preqin Private Equity Index reached a high of 427.1 points, compared to 283.7 for the S&P Total Return as at December 2017. This significant margin is the result of healthy and robust outperformance exhibited by private equity managers globally. As with most high-performing groups, we strongly advise our clients not to proactively offer fee discounts and to assess the momentum of the fundraise before any discount is considered. If the raise needs a boost and an investor is willing to commit early and in size, then a fee reduction may be warranted. If lower fees are conceded, the agreement language should limit any discount to first-closers above a certain commitment level, thus making sure that the most favoured nation clause (MFN) is not tripped for investors that have less of an impact. We also make it clear to our clients that giving up a piece of the GP or carry points should be a non-starter unless there is something beyond capital that an investor can provide (e.g. unique sourcing, technical capabilities etc.).

On the flip side of discounted fees, the strong fundraising market has in some cases allowed managers to obtain premium compensation, typically in the form of premium carry. We have seen premium carry attained primarily by two means. The first is by offering investors a lower management fee in return for higher carry. Some GPs have offered two different fee structures, the traditional 2%/20% or a lower management fee of 1% to 1.5% with a carry of 25%. This can be an attractive alternative for investors as it more directly aligns the compensation with the success of the fund. The other premium carry structure we have seen involves managers sticking to the traditional 2% management fee but putting in place a tiered structure where carry increases as returns increase. For example, a manager might get 25% carry above a 2.5x net return and 30% above a 3.0x net return. Investors have gotten comfortable with these structures for their best managers, but they may also require an IRR hurdle to make sure the manager does not continue to hold an asset while allowing the IRR to deteriorate just to reach the multiple hurdle. Above all, an investor needs to be comfortable that higher incentive fees will not drive the manager to take on significantly more risk than the strategy has historically warranted in order to achieve the higher returns.

As it relates to extended fund life terms, the traditional 10-year model is being tested more frequently. Permanent capital, while every GP’s dream, is difficult to secure so managers are starting to seek fund life terms out to 15 years. The rationale is that they do not want to be pressured to sell a business, which continues to compound returns at 15-20%, just because the fund has reached its contractual limit. For some types of investors, longterm funds can be attractive to avoid re-investment risk, while others may have their own policy or structural issues with the longer term. Additionally, some investors may take a cynical view that managers will hold businesses just to continue to collect fees. Nonetheless, we do see funds with an extended fund life being raised by high-quality groups, although they generally include a significant step down in fees in later years.

We are fortunate to be running a business in an industry for nearly 20 years that has continued to grow and prosper. We will continue to see an evolution in terms as we get deeper into the maturity curve of the industry life cycle. There are thousands of smart limited and general partners making investment decisions every day, and as long as the industry keeps irrational political pressures at bay and operates within a regulatory structure that is not overly restrictive, we believe that terms will continue to evolve in a way that best aligns the interests of all parties involved in private equity.

Buyout fundraising has experienced a resurgence over the past two years: $75bn and $68bn was raised in Q3 2017 and Q3 2018 respectively (Fig. 2). Venture capital funds had their most successful quarter in six years, with 101 funds securing $18bn. Growth fundraising experienced a marked increase (+$8.7bn) in Q3 2018 in comparison to Q3 2017, when 48% fewer funds raised $25bn in capital commitments. On the contrary, fundraising activity for funds of funds experienced a sharp decline. Just one more North America-focused fund closed in Q3 2018 than in Q3 2017, and these funds collectively raised $82bn – a $4.5bn increase. In contrast, Europe-focused fundraising experienced a slowdown with just 39 private equity funds reaching a final close in Q3 2018 for $11bn in capital commitments.

Despite fewer funds closing in Q3 2018, fundraising trends throughout 2018 remain positive. Of the 799 vehicles that have reached a final close in 2018 so far, 80% have met or exceeded their target size – the largest proportion since 2013 (Fig. 4). Simultaneously, time spent on the road has steadily decreased from an average of 19 months in 2013 to just 13 months in 2018 YTD. 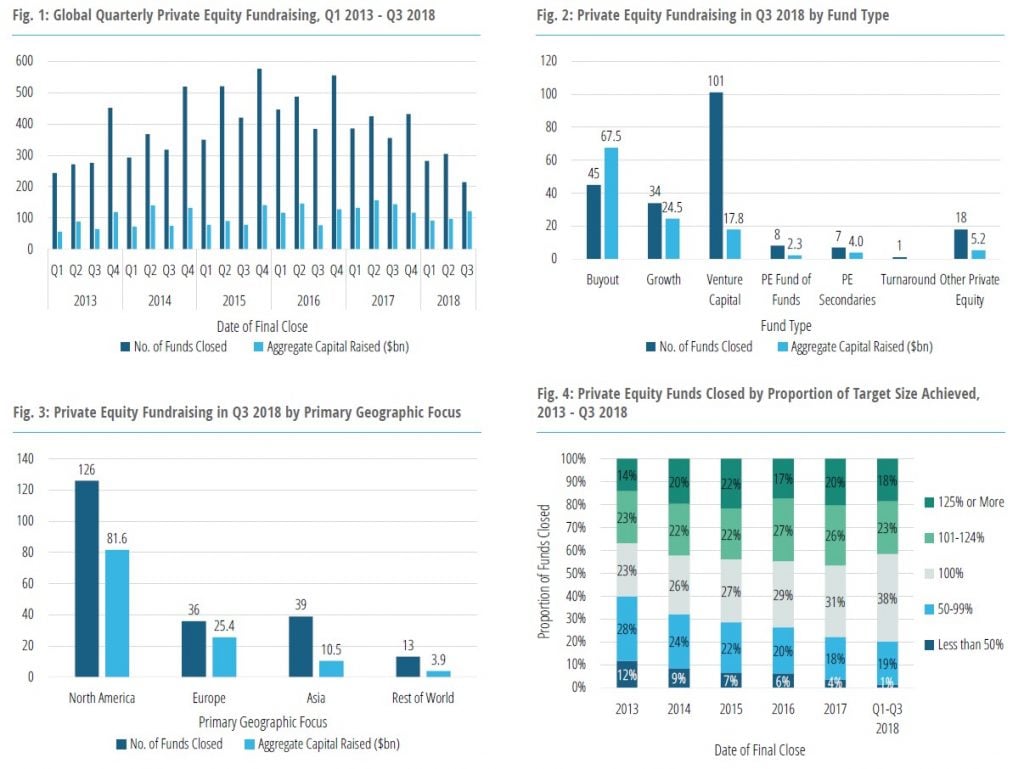 The number of private equity funds in market has reached a new record of 3,921 as at the start of Q4 2018. Aggregate capital targeted stands at $956bn, and almost one-third of this figure has already been raised by funds that have held at least one interim close ($304bn). 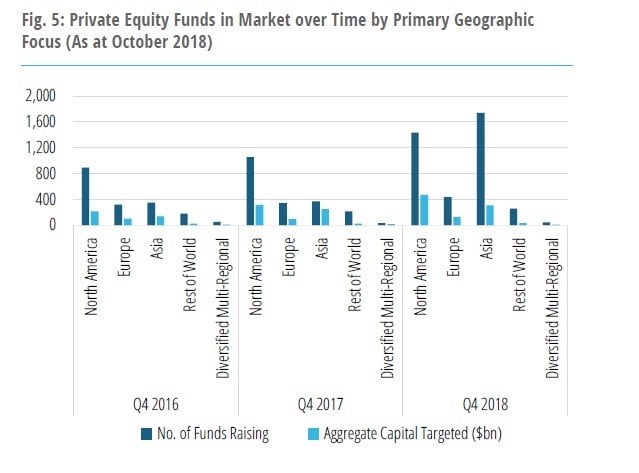 A significant proportion (37%) of all funds in market are targeting North America; however, the largest proportion (44%) are targeting Asia (Fig. 5). There are 90 more Europe-focused funds in market as at the beginning of Q4 2018 (437) than at the beginning of Q4 2017 (347); these funds are seeking $130bn in commitments, accounting for 13% of the aggregate global target. The majority (2,326) of funds currently in market are venture capital funds, though buyout funds are seeking more capital ($317bn, Fig. 7).

Six of the 10 largest funds in market are focused on investment in Asia, the largest of which is China Structural Reform Fund. The vehicle is seeking CNY 350bn ($53bn) and held a first close on CNY 131bn ($20bn) in September 2016. 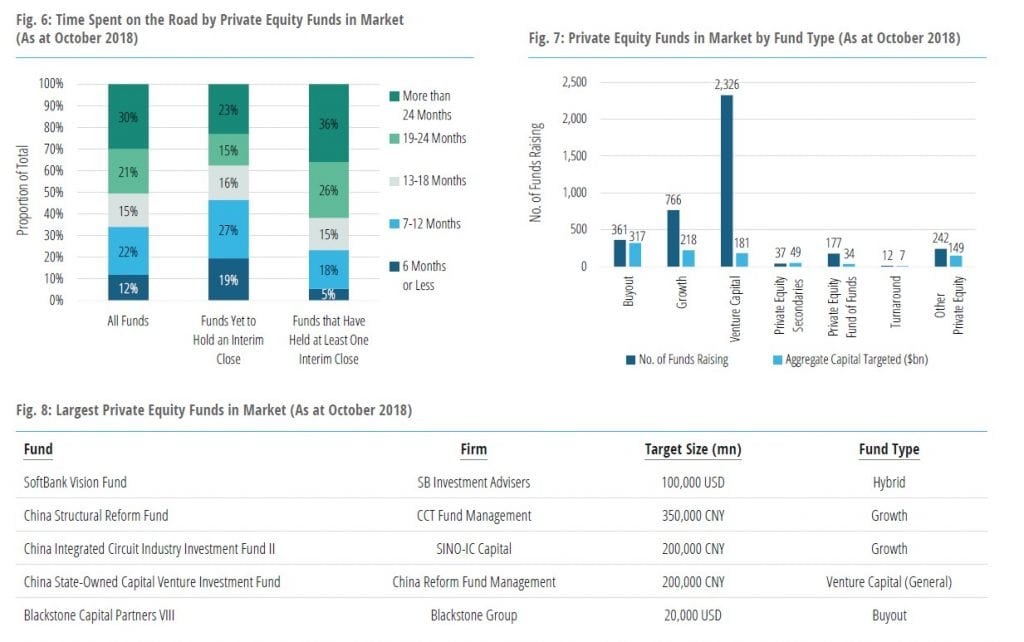 Three-quarters of private equity investors are looking to make commitments to between two and nine funds in the next 12 months (Fig. 10). However, with investors generally planning to commit less capital in the coming year than they were at this point last year, the proportion (11%) of investors looking to make commitments to 10 or more funds is unsurprisingly smaller than the proportion (20%) seen in Q3 2017.

Buyout remains the most favoured strategy among private equity investors, with 70% planning to target the strategy in the next 12 months (Fig. 11). Investors also view venture capital and growth funds favourably, with 53% and 50% of investors looking to place capital in these strategies respectively in the coming year. The majority of investors plan to commit capital to funds focused on North America (52%) and Europe (51%) in the year ahead, while almost a third (31%) will target Asia-Pacific (Fig. 12). Furthermore, 45% of investors will look to make commitments to funds that will provide global exposure. 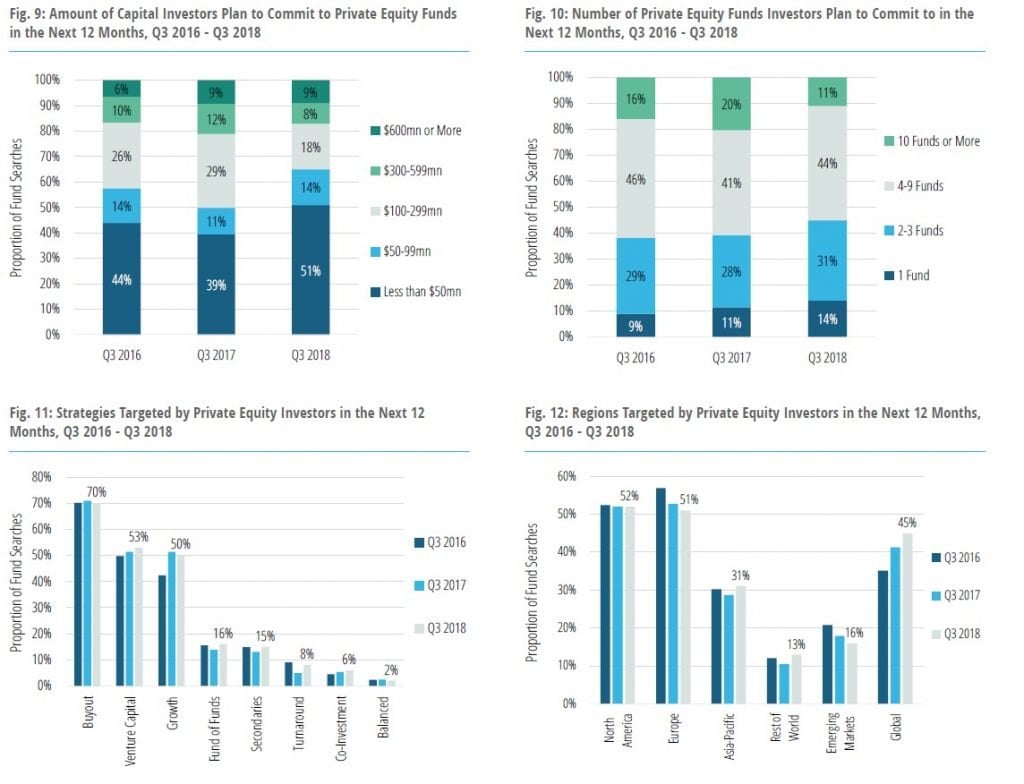 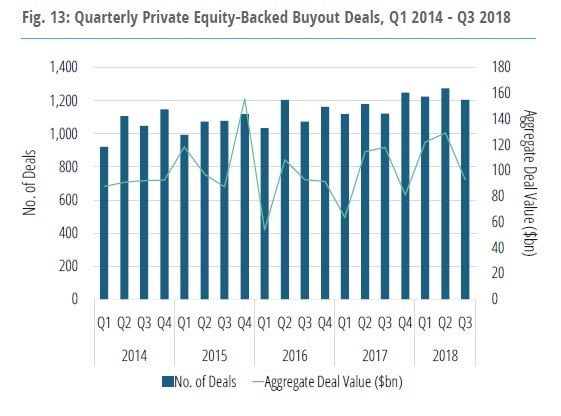 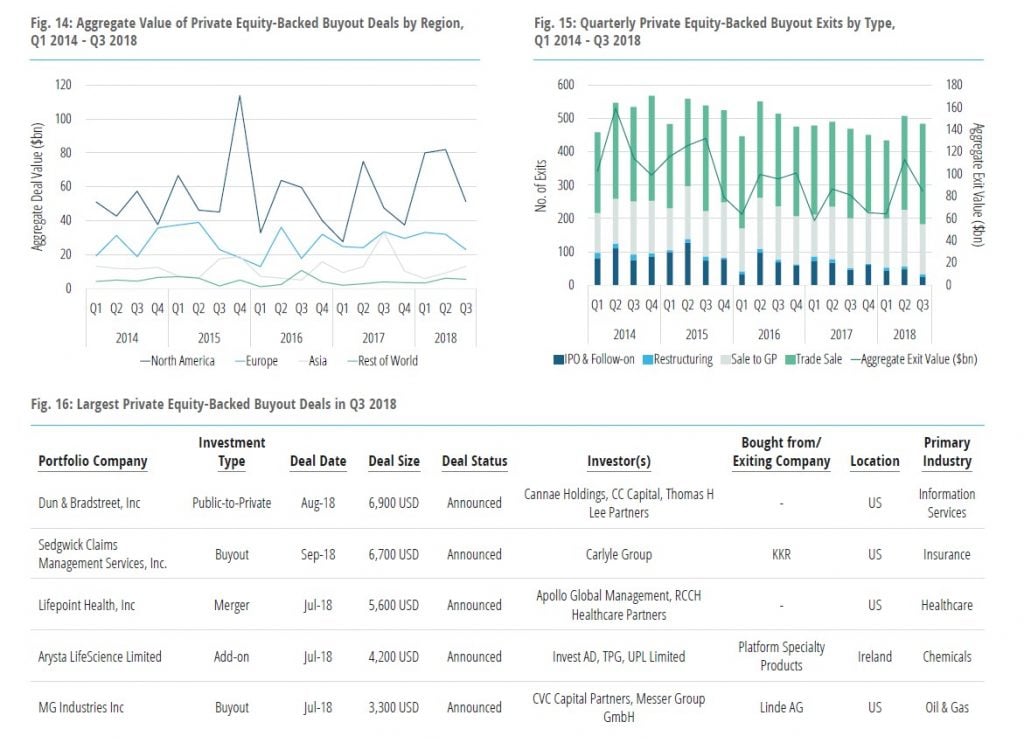 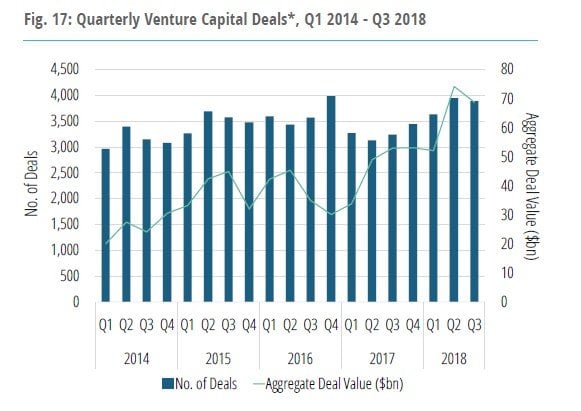 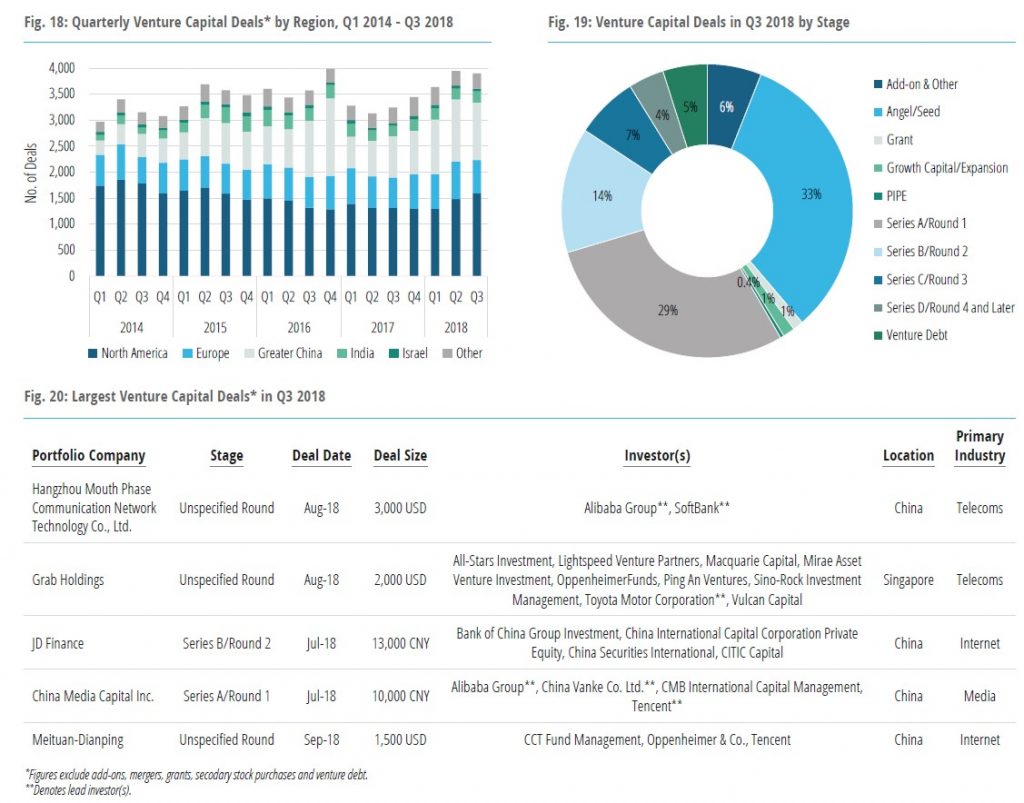 Private equity funds have posted strong annual returns over the one- (+19.5%), three- (+15.1%) and five-year (+15.8%) time horizons to December 2017, with lower returns over a 10-year horizon (+10.6%, Fig. 21). In terms of specific strategies, buyout funds have outperformed the private equity asset class, with higher annualized returns across each time period examined. Conversely, venture capital funds performed relatively poorly across all four periods, with their highest returns seen over a five-year time horizon (+13.2%).

Funds of vintage 2010 onwards have performed better than those that began investing in 2004-2007, the years leading up to the Global Financial Crisis (GFC, Fig. 22). The gap between the top and bottom performers has widened since the GFC, with the interquartile range reaching 18.4% for vintage 2015 funds. Private equity funds have distributed significant sums of capital to investors in recent years: distributions exceeded capital calls for the seventh consecutive year in 2017 – however, net cash flow fell to $36bn in 2017 (Fig. 23).

The record levels of dry powder held by private equity funds have continued to grow, reaching a record high of $1.14tn as at September 2018 (Fig. 24). Buyout funds account for the majority (56%) of dry powder, while growth funds have seen the largest year-on-year increase (+64%) from December 2016 to December 2017. 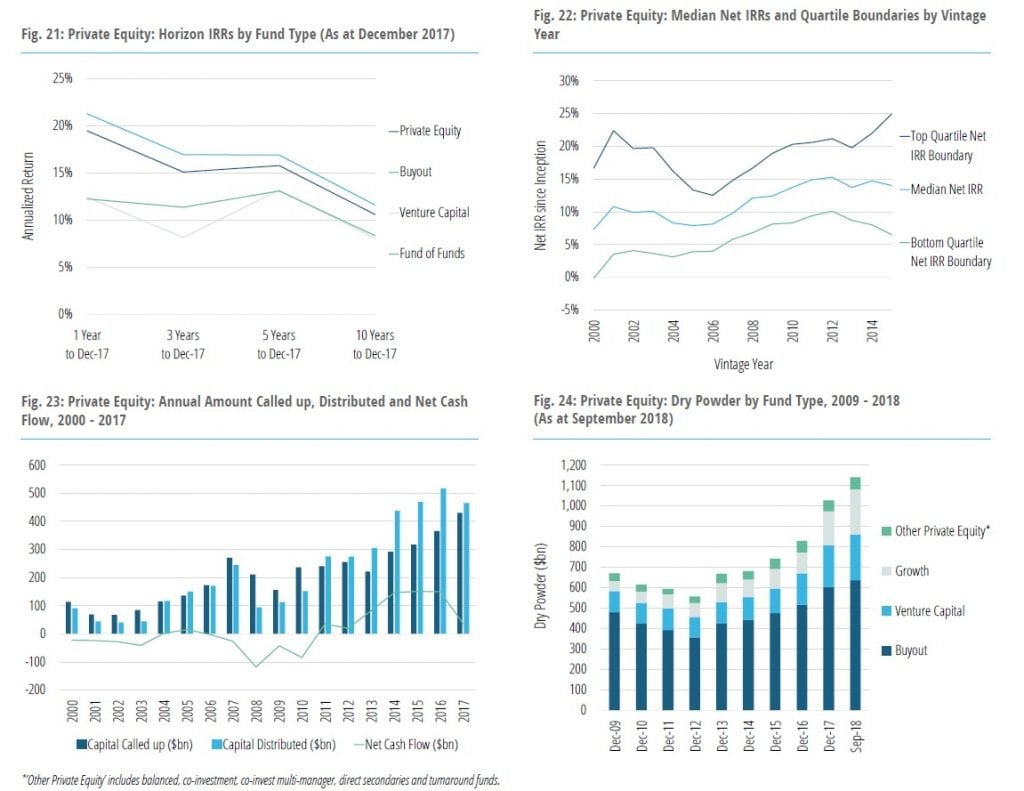