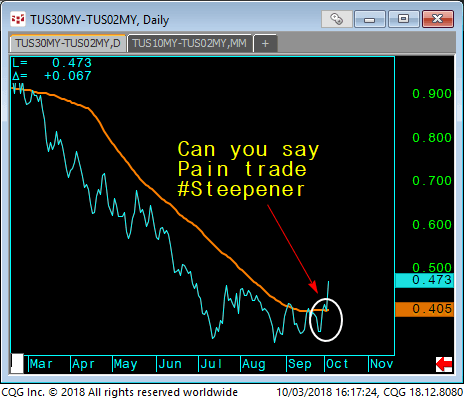 This last week was full of reports of wide spread over valuations across the gamut of both global equity markets as well as global bond markets, especially Europe. Now we aren’t talking about some bobble headed main stream media types, we are talking about titans, the likes of Ray Dalio, Stan Drunkenmiller, Jeff Gundlach all relaying the same theme, “well above historical norms.” We even read a great piece on the PEG ratio from Fasanara Capital, which stated that the PEG, which is a statistical measure of how expensive a stock is relative to its ability to generate earnings, is well above 1999 highs and probably rightfully so given the plethora of cheap financing from zero rates, unprecedented HY rates and of course continued tax breaks. All that said, the pressure from the rhetoric from the guys we just mentioned should begin to mount, as they most certainly have an agenda attached to such warnings.

Even the FED head himself Jay Powell had some remarks that should put a pause to all of this economic equity overzealousness when he stated,

“interest rates are still accommodative, but we’re gradually moving to a place where they’ll be neutral - not that they’ll be restraining the economy. We may go past neutral. But we’re a long way from neutral at this point, probably.”

We have said this all along, the FED needs to get short rates above the 10yr rate to stop corps from arbing all the excess liquidity via debt for equity swaps aka share repurchases. The distortion of low interest rates has caused severe mispricing in all asset classes as everyone has become an interest rate arb. Who needs profits when you can fund yourself with debt, buy back shares, issue dividends and put off the day of reckoning some time far off into the future? Well you can do this as long as you can keep wage and cost inflation from eating too far into your profits, are we at that point? We are damn close and the higher interest rates go, the quicker we get there. The bond market will be the bear that crushes the equity market, that we are certain.

To further the point of this dangerous game of rising rates and a pro protectionist political motive, we need not look any further than the power of the US dollar lately. We can demonstrate this both vs the emerging markets as well as vs the Euro itself: 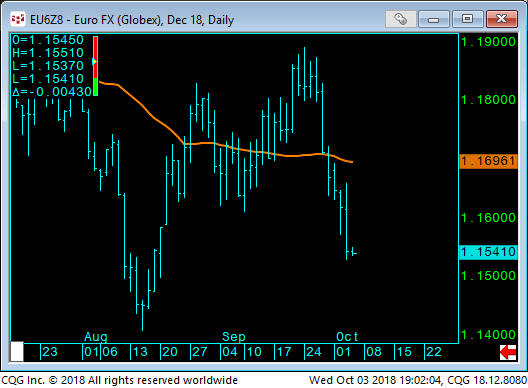 So, it seems US policy has shifted to strong dollar - Pro America and its our currency your problem type of mentality. However, we must give our fearless leader some due credit as we have successfully renegotiated NAFTA and now we have the USMCA (United States Mexico Canada Agreement) about as straight forward an acronym as they come. Some of the details which do not go into effect until 2020, but outline provisions such as 75% of a vehicle’s production must be done with parts made in the USA and 30% of the work done must come with wages earning at least $16 an hour, reports the WaPo.

Back to the financial sphere and the technical aspects of our markets, we recently have noted the strength in the energy complex lately and most notably the Natural Gas market. The trend is obvious and we feel its indicative of a cold winter coming and supply not necessarily optimal given the complacency and  unpreparedness by the global warming alarmists out there. In fact, given the grand solar minimum that we are in, we have been one of the first ones out there reporting on this colder than average, “new normal” and we feel its driving energy prices. We catch a lot of flak on Twitter and Linkedin when we talk of the earth cooling, but we always back up our premise with facts, like this just released this week: 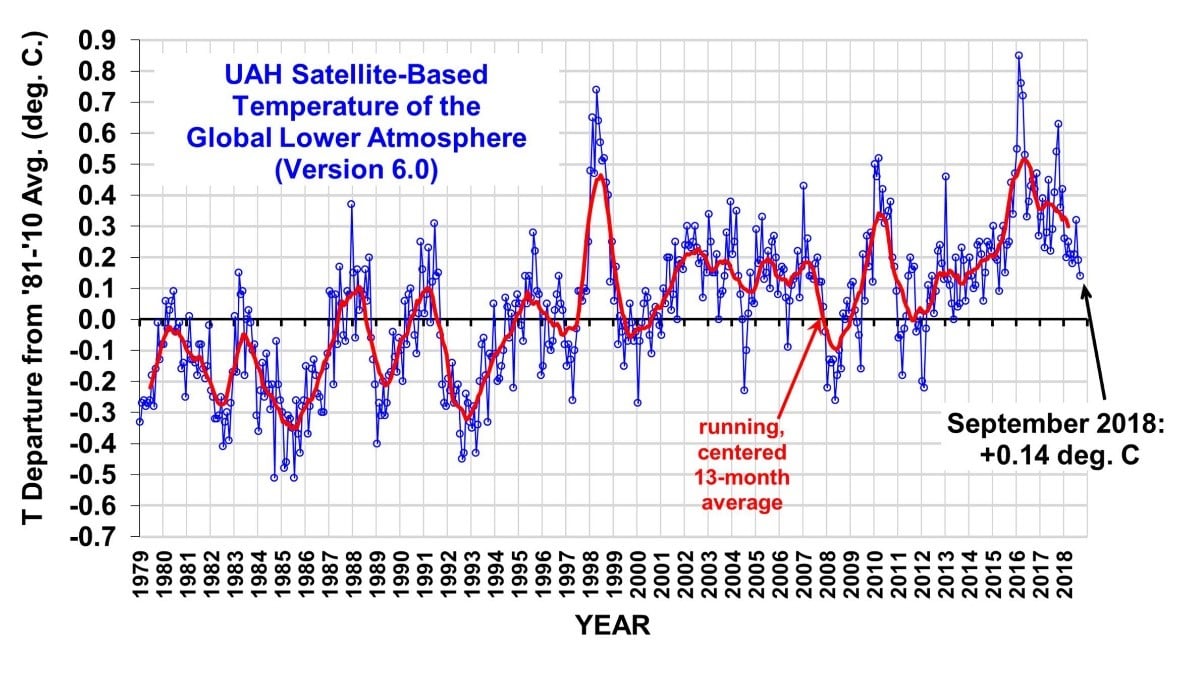 Basically, what this chart shows you, is that the global lower atmospheric temperature is the exact same as it was in the early 1980’s, absolutely ZERO global warming. If you don’t believe us just look at the record cold temps in Poland today, we expect this to continue. As for the Nat Gas chart, here you go 3.23/3.25 area should present initial resistance but the trend is obvious: 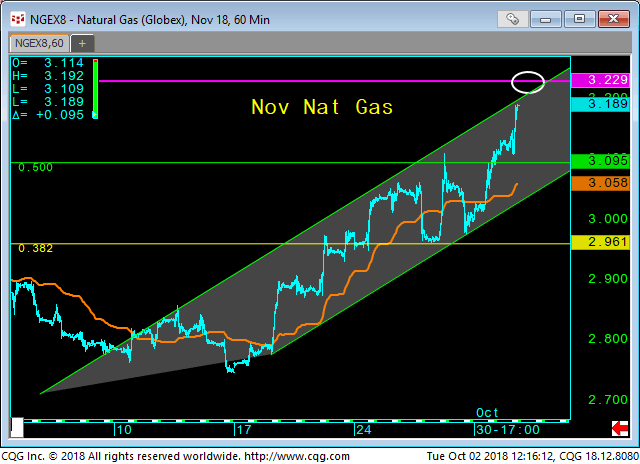 The Crude Oil market has also been in overdrive, $75.50/$77 might slow the ascent but the trend is still in higher prices: 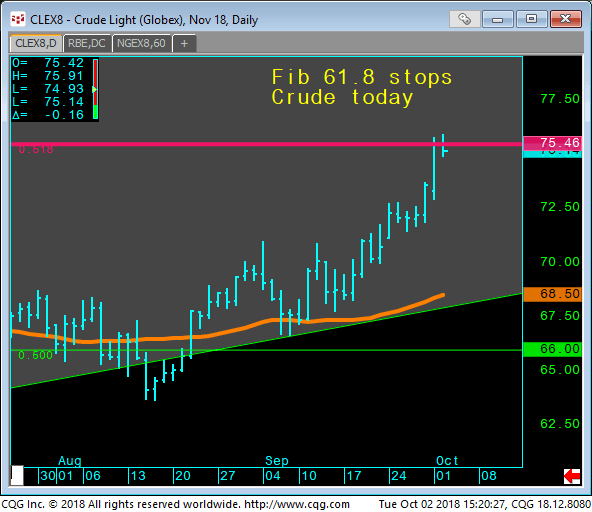 Another obvious trend and one we highlighted recently was the strength in the US front end vs the long end. With everyone dead set on the curve inverting, we noted the easiest trade to make, the one that would spread the most pain, would be a bear bond steepening. This week, trade so far is exhibiting just that, as this trendline is being broken as of this writing and the US 5s30 trades at just over 29 basis points: 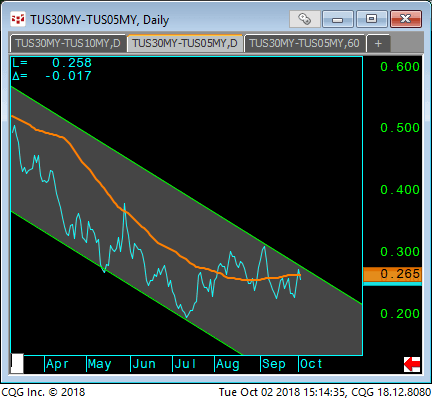 As far as the European Bunds leading the way for our markets, the Vwap presents a large hurdle here and was clearly rejected today as the Bund was hammered down back below 159-00 a clear rejection of this Vwap and fib double resistance: 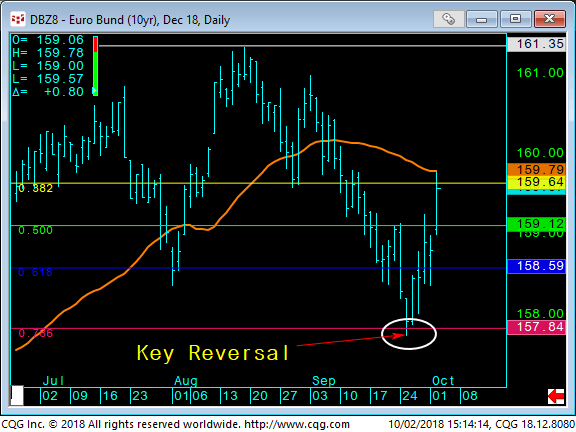 Let’s talk about the coveted equity markets, we show the DAX first as we like to look to it to drive US direction as its been undoubtedly used as a long hedge vs it’s U.S. counterparts and the down trend is obvious. The trend channel top is nearby and offers global equity markets some resistance to moving higher: 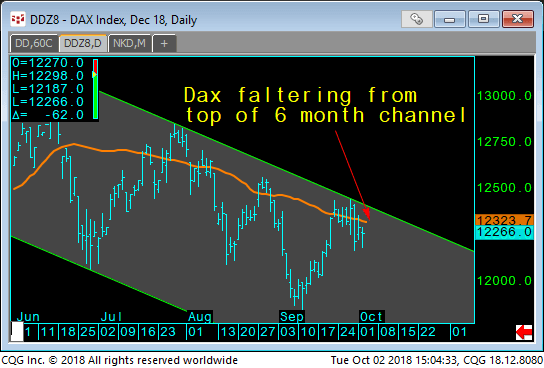 Speaking of another anti long market bias hedge for the high flying FAANGs is the Russel Index. Its been in beatdown mode lately as the small caps, once the driver of growth has been clearly faltering lately as it breaks a 4-month long trend line: 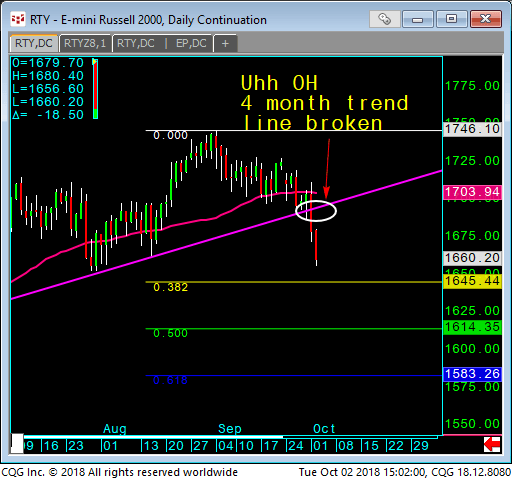 The Nasdaq the power house seems to have been humbled for now and will see if the highs hold and we rotate back down, below 7660 keeps downside open: 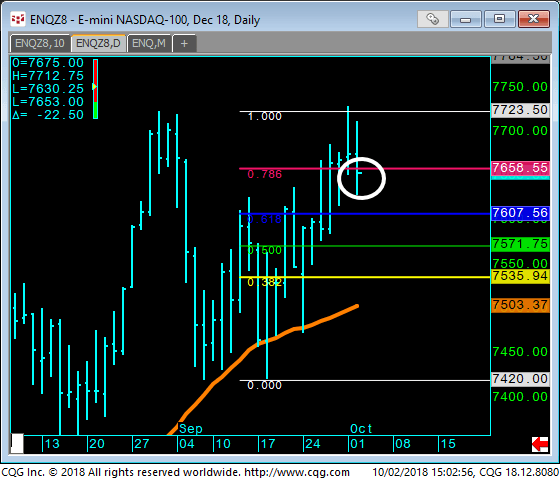 As far as the SP500 we have our diverging trend channels outlining our bias as 2940 and 2912 present our parameters for now: 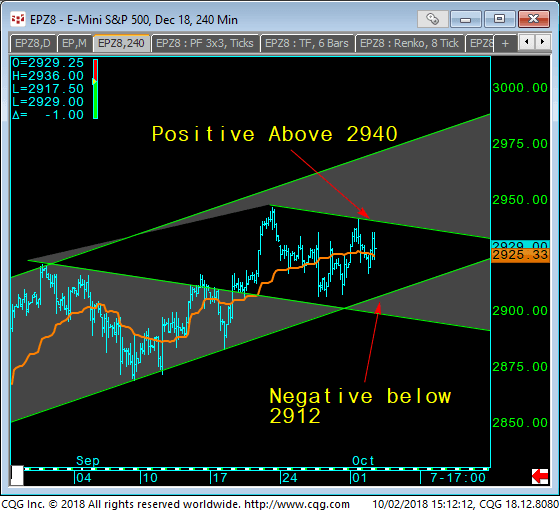 Ok that does it, we thank you for reading and we look forward to keeping you above the rest. We hope that our thoughts offer you some incentive to look inward at your own market viewpoints in order to expand your mind and processes toward better understanding the chaotic market places that so define our systems. Have a great week and we wish you all the best, cheers!

Late day chart addition, just an update on the breakout in the US 2s30 yields chart: