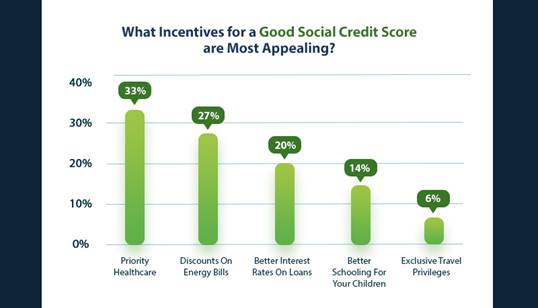 Everyone knows the ins and outs of traditional credit scores – where banks and credit card companies monitor how savvy you are with your money and assign a ‘score’ which decides your eligibility for loans and financial products. Fewer people are aware of the concept of ‘social credit scoring’. You may have heard about the system currently being tested in China – reportedly being rolled out as standard practice across the country by 2020 – but did you know that similar schemes are currently being considered in Europe?

Commercial finance specialists, ABC Finance Ltd, have conducted research to find out how the UK would cope with social scoring and whether we’re ready for this type of monitoring governing our behaviour both on and offline. You can also find out what your social credit score would look like in their online test.

How Does Social Scoring Work?

A social credit score tracks more than just how good you are with money, it involves a collaboration between the government and financial institutions which ranks people based on their everyday actions. This is accomplished through CCTV monitoring or surveillance of your online activities.

To put it simply, everything from how you choose to spend your cash to your behaviour on social media, and even the people you associate with day to day can affect your social credit and, as a result, whether you are rewarded or penalised.

ABC Finance Ltd conducted a survey to find out the UK’s opinions about the social score system. Their results highlighted that the majority of people are concerned by the prospect, with 66% saying that they would alter how they behaved both online and offline if they knew they were being assigned a value based on it.

It’s not just how people would police themselves, 75% of respondents also stated that they would stop associating with people that acted in a way that might affect their score. 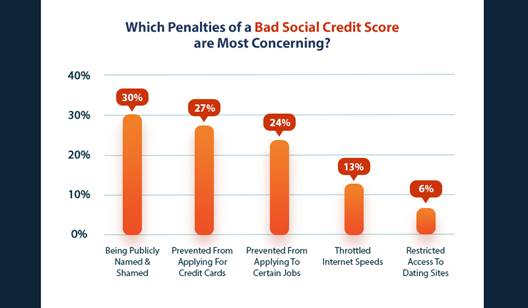 How Would Brits Perform Under Social Credit?

Setting aside people’s clear misgivings about the idea of social scoring, the survey also asked people to respond to a variety of scenarios to ascertain how their decisions would affect them under a system similar to that currently underway in China.

The results below reflect those that chose the ‘undesirable’ option:

In each of the above hypothetical situations, at least 25% of people surveyed would have been penalised for their decisions under the scheme active in China as well as the one currently being proposed in Germany.

The social scoring system incentivises people to be ‘good citizens’ through a carrot and stick system. Have a great social score? You’ll have access to perks to reward you. Refusing to obey the guidelines? Prepare for restrictions on what you can and can’t do.

Here are some examples of the rewards and punishments currently being deployed in the Chinese system.

More than 1/3 of people who took part in ABC Finance’s survey was concerned that their score would be either bad or, at best, average. This means that they would risk facing negative consequences. With this in mind, it’s no wonder that 78% had an overwhelmingly negative opinion of social scoring.

As for which benefits would make people likely to accept social credit, respondents were most enticed by prioritised healthcare, favourable interest rates on loans and discounted energy bills.

What about the punishments that most concern people? According to the survey, being blocked from accessing credit cards, restrictions on the jobs you can apply to and being publicly named and shamed topped the list.