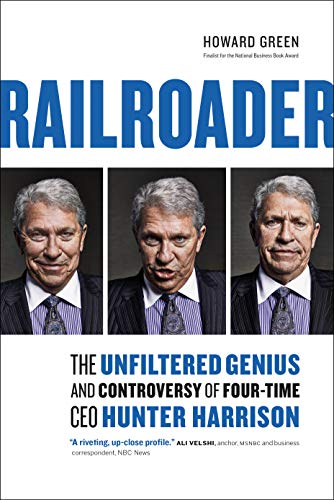 On October 13, 2011, (Hunter) Harrison was sitting in one of the conference rooms at the fund’s offices. In one corner, there was a peculiar-looking contraption, a 1951 rocket-powered ejection seat from a Canberra Nuclear Strike Bomber. It had been put there as a graphic reminder to staff at Pershing to bail out if an investment went bad. Pershing is known for making big bets on investments that (Bill) Ackman and his team have rigorously targeted and researched. The firm has made a fortune on certain investments and lost a fortune on others, but Ackman has been considered an investor to reckon with—and one who causes friction, not unlike Harrison.

The forty-second floor offices Harrison visited are heavy on glass and modern design, with a view of the entirety of Central Park. He heard somebody coming down the hall and then saw a tall man walking in an animated, energetic manner toward the conference room where he was sitting. Ackman bounded into the room and introduced himself. “Why don’t you and I go to lunch?” Ackman said to Harrison. (Paul) Hilal said he had arranged the lunch, booked the time in Ackman’s calendar, and made the reservation for just two people so Ackman could independently form his own judgment of Harrison. He also believed a one-on-one would allow each man to size the other up and develop trust. The duo then walked to The Modern, the upscale restaurant at the Museum of Modern Art. Ackman has long legs and is a fast walker. Harrison, who’d had a vascular procedure in his legs that summer, was huffing and puffing by the time they arrived. Ackman, an advocate of healthy living, soon became Harrison’s informal nutritionist and exercise coach. “When I would sit with him at dinner, I would pull away the wine bottle. I wouldn’t let him eat dessert,” Ackman said. “He must have thought I was a fucking pain in the ass.”

They went to a table in the right corner by the window, the least conspicuous part of the restaurant. Ackman is a familiar face in certain circles in New York. He said that if someone recognized Harrison, he worried they’d put two and two together. The lunch lasted a couple of hours.

“We want to get CP and we want to know your thoughts and I want you to run it,” Ackman said, cutting to the chase.

“Bill, you can’t afford me,” Harrison said, half-kidding. Ackman told him what he had in mind for compensation.

“Looks good to me,” Harrison said. “Ackman and I made that deal in a day.” The chemistry was good. So was the potential for each of them to make a lot of money. Ackman said, “in the first five minutes, you could tell he was the right guy.”

“I mean this guy’s a general. He’s like Patton,” Ackman said. “And running a railroad is like running an army, right?” Harrison had made the same reference about Bill Thompson, his mentor.

While Harrison had a consulting agreement with Pershing as of September 23, 2011, they went back to the office where Hilal and Harrison finalized the outline of a compensation arrangement in the event Harrison became CEO of CP (ultimately, the railroad’s board would have to hire him, not Pershing). Their agreement, according to Harrison, consisted of eight or nine lines on a legal pad. His salary would be modest for Harrison, $550,000 a year. That would be on top of his $1,500,000 annual pension from CN. What he really wanted was a significant stack of stock options—650,0003—on the company, plus access to a jet so he could commute to Calgary from his homes in Connecticut and Florida. Later, Pershing would also indemnify Harrison in the event CN tried to take away his pension and other post-employment compensation owing, in the neighborhood of $40 million. That agreement was dated January 28, 2012 (Pershing ultimately raised Harrison’s protection to $100 million). While these amounts are stratospheric for most people, Ackman thought Harrison’s demands were reasonable given how much he thought the railroader could make for Pershing and other shareholders. Besides, according to Ackman, when it came to running railroads, “there’s Hunter and there was everyone else.” To Pershing, the huge premium to get Harrison was worth it.

On the surface, if you were to sketch two characters who would be polar opposites, you might draw Bill Ackman and Hunter Harrison. Ackman is a New Yorker who went to Harvard Business School, while Harrison went to work as a grime-covered laborer at a railroad. Ackman is a polished, northeastern intellectual, while Harrison was a rough-around-the-edges, self-educated Southerner. Ackman grew up in an affluent suburb; Harrison came from working class stock. Nonetheless, they had much in common. Ackman reads financial statements on vacation and Harrison didn’t like to take holidays, or at least ones that lasted more than a few days. A book about Ackman, Confidence Game by Christine S. Richard, describes him as “brash, blunt, almost neurotically persistent.” The same could be said of Harrison. Both were fierce, competitive, single minded, and brainy. Both were fervent believers in their own ideas and skills. Both would yell at people when they deemed it necessary, a manifestation of their zealotry. As Ackman told Jacquie McNish in the Globe and Mail in 2012, “I’m exactly who I appear to be. I am unfiltered, for better or worse.” No one would ever accuse Hunter Harrison of being otherwise. They liked and respected each other, and Harrison said they could do business on a handshake (Harrison said he could do same the same with Hilal).

On October 28, Pershing disclosed its investment in CP. After the news broke, Jim Gray, who was on CN’s board during both Paul Tellier’s and Hunter Harrison’s tenures as CEO, was at the TV studio in Toronto to tape a segment for my program, Headline. Prior to going on set, he mentioned that he’d bet Harrison was somehow involved in the Pershing situation. All the signals were there. CP had a bad operating ratio, it was a long-haul railroad, and Harrison was familiar with the Canadian market.

“It made such eminent sense,” he reflected. “Who the hell better to turn CP around?” Besides, he knew Harrison was ambitious and wanted to work. “He’s going to die with his spurs on,” Gray said presciently in a 2017 interview. “He has no choice. He’s addicted.”

Meantime, the executive committee of CP was on a train about to travel from Toronto to Montreal for a board meeting. The railroad’s chief legal officer, Paul Guthrie, who’d been with the company for more than twenty years, got a message that a Mr. Ackman wanted to speak with the chairman. It was then that the upper reaches of CP found out Pershing had purchased the railroad’s stock. Before the group traveled on to Montreal, lawyers and bankers were called to advise the company. They boarded the train. The whole way to Montreal, the top echelon of the company conferred with advisors.

Ackman and CP’s chairman, John Cleghorn, spoke twice by phone on October 29, 2011. On November 2, Ackman, Hilal, and (Brian) Welch flew to Montreal on a private jet, a G550. At the airport in a so-called FBO—a fixed-base operator where private planes pull up—they met with Cleghorn and the railroad’s CEO, Fred Green. Ackman knew Cleghorn was interested in military history, so he brought him a book as a gift. Cleghorn gave each of the Pershing representatives a poppy—the red pin Canadians wear in the run-up to November 11, Remembrance Day, a solemn day designated to honor Canada’s war dead.

John Cleghorn—the former chairman and CEO of Royal Bank of Canada (RBC), the biggest company in the country—embodied blue-chip Canada. Ackman suggested to Cleghorn in advance of the meeting that it would be awkward for Green to be present, given that Pershing was looking to replace him. He said Cleghorn insisted CP’s CEO be present.