At the end of September, the Board of Governors of the Federal Reserve System pegged unfunded pension liabilities of US state and local governments at more than $4 trillion, a significant increase on the previous figure of $2 trillion.

The new number is the reflection of an accounting change in the way that the Fed considers expectations of future salary growth.

Under the previous model, the Fed relied on an “accrued benefit obligation,” or “ABO,” approach to measuring liabilities. This method used salary growth once it had already occurred, rather than projected salary growth. As pension benefit formulas are typically based on higher average salaries, which tend to occur towards the end of an employees career, ABO accounting can give somewhat of a misleading estimate of future pension obligations.

Instead, the Fed has now adopted a “projected benefit obligation,” or “PBO,” approach. This method of accounting recognizes assumed future salary growth, which gives a more accurate reflection of the ultimate pension liability that will arise for each employee.

The most significant difference between ABO and PBO accounting is that the former tends to understate the ultimate pension obligations for each employee throughout their career while PBO accounting gives a smoother, more realistic and less volatile prediction, as the chart from credit rating agency Moody's below shows.

Unlike the trustees of US state and local government pension funds themselves, the Fed uses Aaa corporate bond yield as a discount rate, which means these numbers are likely to be more accurate than the highly optimistic discount rates being used by some pension funds. As Moody's describes:

"The Fed uses Aaa corporate bond yields as a discount rate based on the approach taken by the Bureau of Economic Analysis (BEA). In recent years, Aaa corporate bond yields have tracked below, but very closely to the FTSE Pension Liability Index used in our standard adjustments. In contrast, the discount rates applied by US public pension systems under governmental accounting standards and for actuarial funding largely reflect assumed rates of investment return of equity-heavy investment portfolios. For example, the California Public Employees' Retirement System (CalPERS), which is the largest US public pension system, reports liabilities using a 7% discount rate."

As noted above, as the higher $4 trillion unfunded liabilities figure only reflects an accounting change and not an economic change. Therefore, it does not immediately affect the credit quality and financial situation of state and local governments. However, the figure does underscore the magnitude of the pensions crisis currently bearing down on the federal retirement system as a whole. 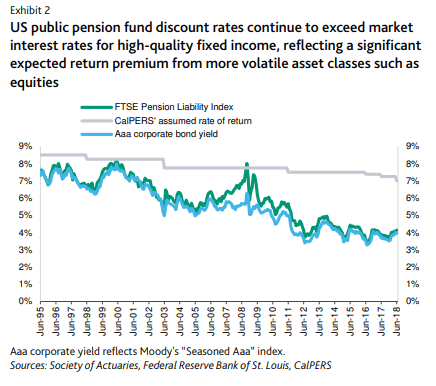 The looming pensions crisis is already having an impact on state budgets across the country.

A new report from Moody's singles out Pennsylvania as a region that is struggling to balance its obligations to pensioners as well as other budget demands.

The credit rating agency notes that in 2007 PSERS had unfunded pension liabilities on a reported basis of $9.4 million, but by 2017, this figure had grown to $44.5 million, a compound annual growth rate (CAGR) of 16.8%. Meanwhile, over the same period, mandated contribution rates for school districts have grown at a CAGR of 18.6%. The median pension contribution for schools has increased from just 1.1% of operating revenue in 2011 to 5.8% by 2017:

Demands on the region's finances have been made worse by "statutory restrictions on local revenue-raising authority and declining enrollment, which has affected the disbursement of state aid," according to Moody's.

With this being the case, districts throughout the Commonwealth of Pennsylvania are going to have to make some tough choices, either pushing through new revenue-raising initiatives or cost-cutting plans. What's more concerning is the fact that Pennsylvania's school districts are already some of the most indebted in the country:

"Pennsylvania school districts have had higher than average fixed cost burdens than their national counterparts. This is generally the result of outsized debt issuance, as illustrated by a median debt burden of 2.9% for districts in the commonwealth, compared with a national median of 1.5%."

With fixed costs only set to rise further, districts may have to take drastic action to cut costs and raise revenues before they face financial hardship.

The Topic Of Gender Diversity On Boards Is Gaining Traction