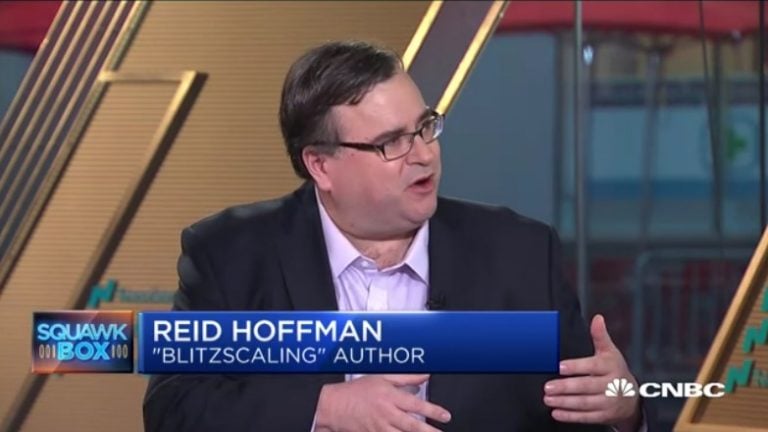 Reid Hoffman on 'Blitzscaling' for start-ups

Well, there’s a lot of different dangers to bad regulation. There is the -- you can sacrifice the future of the tech industry. It can be something that no longer an American specialty and is more handed to the rest of the world. You could restrict start-ups versus existing companies. There’s all these regulation – all these risks that are really serious.

I think what he’s focused on is saying, “Hey, look, I’m trying to build something the three, five, ten years in the future, and I don’t want to be -- kind of like, ‘Oh, well what does this month look like? Or this quarter look like?’” And so he’s interpreting it that way. And, look, part of his grit, and part of his determination to get to that long future is to push back against these obstacles. I just think it needs to be a different pattern than those tweets.”

So I think that there are political leanings in any industry, any region, etcetera. So it’s not like everything is a perfect microcosm. And I think that the Valley has this, like, “We want to build and construct the future.” And that does tend you to a certain kind of political leaning. Now that being said, look – just because I have a political leaning doesn’t mean that I am unreasonable, doesn’t mean that I reject counter points of view. That’s one of the reasons why I really value my relationship with Peter. We argue and we learn from each other all the time. And so I think that the fact that the – the Valley has this kind of future oriented slant. Like for example, very pro “Let’s do something about climate.” And people will say, “That’s political.” And it’s like “No, I think that’s just scientific.”

Reid Hoffman on Transparency With Consumers:

And the thing is when you find something, you should report it. You might kind of take a few days to make sure you got the facts straight and other kinds of things. But you should make sure your consumers know that they can rely upon you to tell them the truth.

Entrepreneurship is spreading not just within the Valley, but within the rest of the world. And the notion is it isn’t just entrepreneurship when you’re small, but you’re also growing these large companies. I think that’s our biggest and most focused hope on jobs in the future, because I think they’ll be created through entrepreneurial entities. So a lot of capital devoted to creating new businesses, is, I think, a good thing.