ValueWalk
Home Info-Graphs The 15 Most Internet Addicted Countries – USA Is #1 But Can... 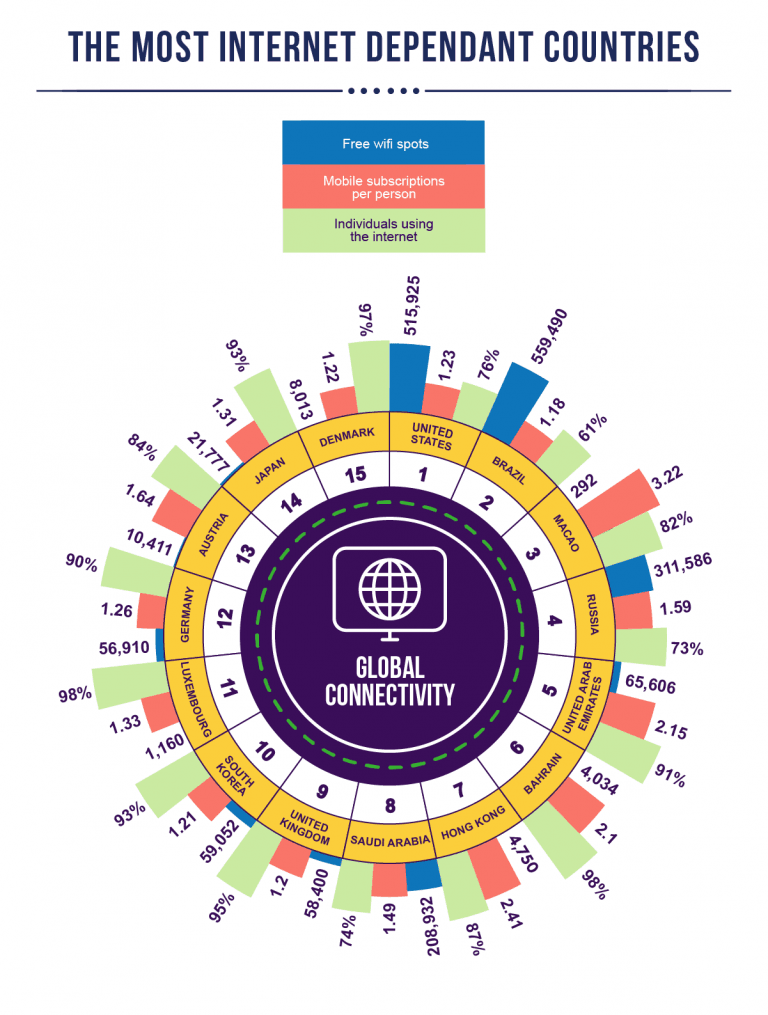 In a world where we’re never too far from a free wifi location, the social media giant Facebook has 2.23 billion active monthly users and our mobile phones are used for just about everything from counting our steps to paying for lunch, leading price comparison website Compare the Market have conducted their study to discover which nations are the most obsessed with being online. But, have you ever truly considered how long you think you could last without access to the internet?

As more and more corners of the globe gain access to the world wide web, individuals suffering from online addiction disorders are emerging across nations in their thousands. In June 2018, the NHS announced that they were looking into opening the first internet addiction clinic to help those suffering with gaming disorders. Studies have also shown how smartphone addiction could be changing our brains and that 50% of teens feel they are addicted to their mobile devices.

The Always Online study reveals that, unsurprisingly, Americans are the most internet addicted citizens in the world with over three-quarters (76%) of the population logging online regularly. There are 1.23 mobile subscriptions per person and over half a million free Wifi locations in the USA, but how does the rest of the world measure up?

Check out the full list of the world’s 15 most internet addicted nations:

In Macao, China, there are over three times as many phones as people as the average person here has 3.22 mobile phone subscriptions – that could be anything from a couple of mobile phones to their iPad or tablet. In a city built for the internet, you would expect that access to the internet would be free and simple… The data reveals that in Macao there are just 292 free Wifi spots, that’s fewer than Luxembourg (1,160), Bahrain (4,034) and Denmark (8,013). 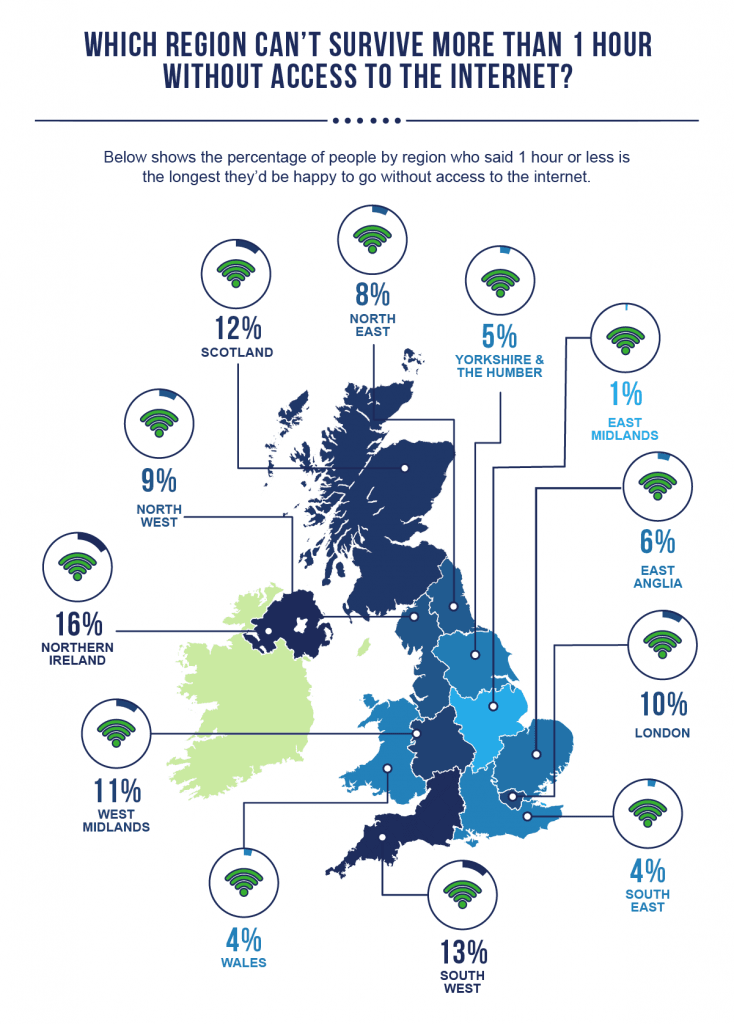 Accompanying the study on global connectivity, Compare the Market also surveyed over 2,000 respondents from the UK to uncover which regions of the country have come to rely on access to the internet the most.

Once analysed, the survey results show that Northern Ireland is the most internet addicted nation in the UK with 58% of the region admitting they feel that they spend too much time online. When asked if they could survive more than one hour without access to the internet, 16% of individuals in Northern Ireland admitted that they could not – the highest out of all 12 regions. The South West of England, renowned for sprawling countryside and the Jurassic Coast, are the second most obsessed region with more than 1 in 10 people admitting that an hour would be the longest amount of time they would be willing to sacrifice away from the internet.

The survey also highlights some other interesting findings of internet usage when broken down by age group. The 25-34-year-olds are the most reliant on the internet with almost 60% admitting that they wouldn’t be able to go without internet access for 24 hours, whilst just 50% of the youngest age group in the study (18-24-year-olds) admitted this. 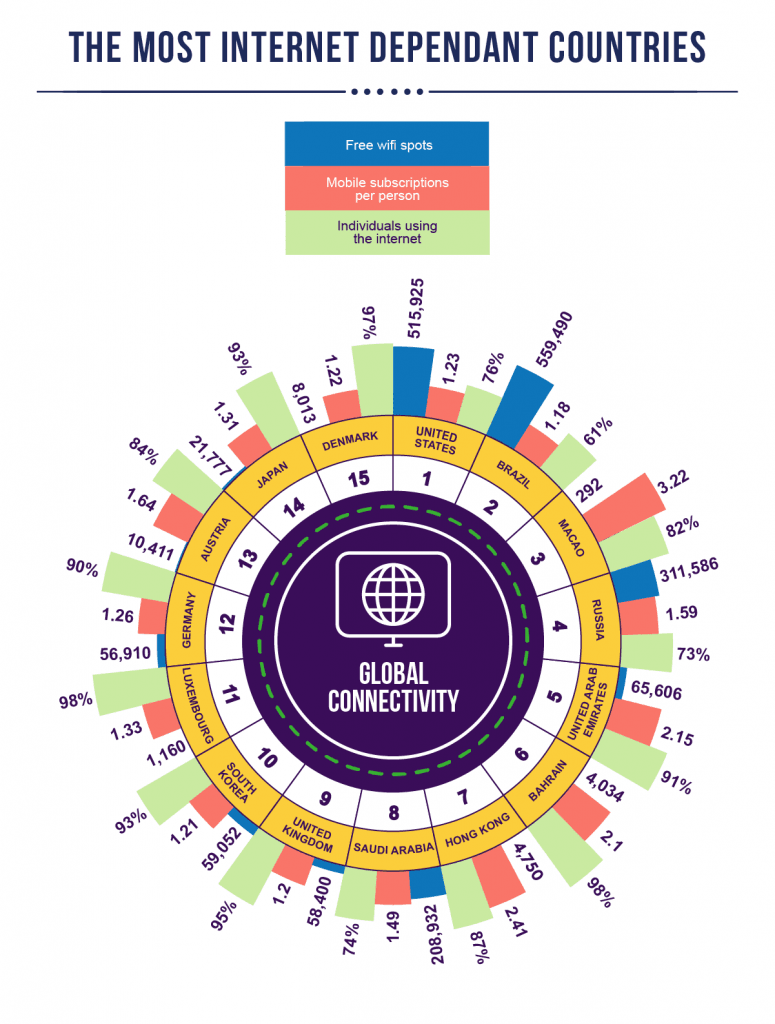 It seems that the stigma with young people being attached to their mobiles fails to be represented in other parts of the survey, too. When asked whether they use the internet whilst on holiday for work purposes, such as to check and respond to work emails, almost 25% of 45-54-year-olds admitted that they do; the highest of any other age group.

As generation wifi seek distance from social media and take breaks from the platforms, it seems that the development of technology and the internet have no intentions of slowing down and more needs to be done to help us track the number of hours spent by each nation online.

For more information on the Always Online content, please visit Compare the Market.