This is part of a series of a selection of articles written by Benjamin Graham between 1919 and 1922 for the Magazine of Wall Street.

In this article, Benjamin Graham is combing the market for attractive preferred stocks.

Graham started his article by outlining the tax benefits of owning preferred issues, with attractive dividend yields in comparison to bonds. He notes that at the time, due to the additional tax burden placed on bond income, "an income of $1,000 from dividends was found to be equivalent to over $1,130 in corporation bond interest." In this situation, preferred stocks offered a much better investment alternative for the "moderately well-to-do."

With the case for attractive preferred stocks over bonds laid out, Graham then goes on to outline the key fundamentals any investors should consider in preferred issues before jumping in. He notes that the "value of any investment depends primarily upon its assets value and earning power," before going on to note that, unlike bonds, preferred stock holders cannot lay claim to a company's assets in the event of a default. Therefore, " the leading consideration must... be the sufficiency of earnings to meet dividend requirements."

With the background of the preferred stock landscape laid out, Graham goes on to present his favorite issues in the market at the time:

"Having established these criteria of preferred stock values, we next proceed to select those issues which meet the requirements most satisfactorily in proportion to their dividend yields. The results of a careful investigation are embodied in Table 2, which sets forth a list of eight of the most attractive preferred issues, arranged in order of dividend return. Needless to say, the presence of Willys-Overland Pfd. and the absence of General Chemical Pfd., for example, do not imply that the former is regarded as a safer investment. General Chemical Pfd. is omitted because there are more attractive issues of the 6% class; Overland is recommended because, as compared with its 7.50% return, its exhibit is remarkably good." 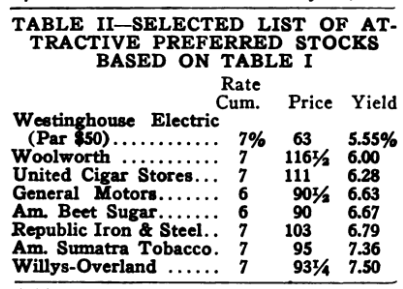 Alongside Willys-Overland, the Dean of value investing also recommends Westinghouse 7%. The shares were changing hands for $63 at the time, with a par price of $50 giving a preferred yield of 5.55%.

"Although Westinghouse preferred yields only 5.55%, it is nevertheless included because of two factors—its gilt-edged security and its participating privilege. The small size of the issue, relative to the common, makes its protection by assets and earnings easily the strongest on the entire list. Failure to pay the meager $280,000 dividend requirement is almost inconceivable. Consequently, the security can well be compared with that of many medium grade bonds yielding no more."

"While the next two issues are both gilt-edged, the somewhat higher yield of United Cigar Stores, Pfd. should make it more desirable than Woolworth, Pfd...The key to the strength of Cigar Stores Pfd. is the small size of the issue, only $4,527,000, compared with $27,000,000 common, selling above 130. If the common stock earnings dropped from $13 to only $2 per share, preferred dividends would still be covered 272 times."

The author then turns his attention to discussing the difference between cumulative vs. non-cumulative preferred stocks. The disadvantage to owners of the former "must be obvious to anyone who realizes that the dividends suspended in bad years can never be recovered," Graham writes. He gives the example of American Linseed Pid:

"On this account, we would select American Linseed Pid. as a shining example of an issue not to buy. The records show that it has paid no dividend at all in sixteen out of the last twenty years, the total payments averaging about 1% per annum. At the beginning of 1914 this stock sold at 29, so that the table shows that it has appreciated twice as much in market price as in asset value. "

Still, while Graham believed non-cumulative issues should generally be avoided, he goes on to note that's some issues could prove attractive, if the underlying business is adequately capitalized.

"On this account, we prefer American Beet Sugar Pfd. to American Cotton Oil Pfd., and we would rather own Virginia Carolina Chemical Pfd. than U. S. Rubber Pfd. (The latter's excellent earnings record is offset by its top-heavy capitalization and somewhat unsavory market reputation.) American Car & Foundry Pfd. is so strongly entrenched that here the non-cumulative provision would appear entirely insignificant. Still, why take even an infinitesimal chance, when there is Barrett Pfd. or United Cigar Stores Pfd. to buy instead?"

And finally, Graham goes over a number of securities he could not feature in full in the article, but he believed were worthy of further research nonetheless.

"If space permitted it could be shown that Lorillard Pfd. is cheaper than Liggett & Myers Pfd., or Goodrich Pid. than Central Leather Pfd., or National Cloak & Suit Pfd. than Cluett-Peabody Pfd. The holder of any preferred issue should be able to derive a fair idea of the relative desirability of his security by carefully examining the figures given in Table 1." 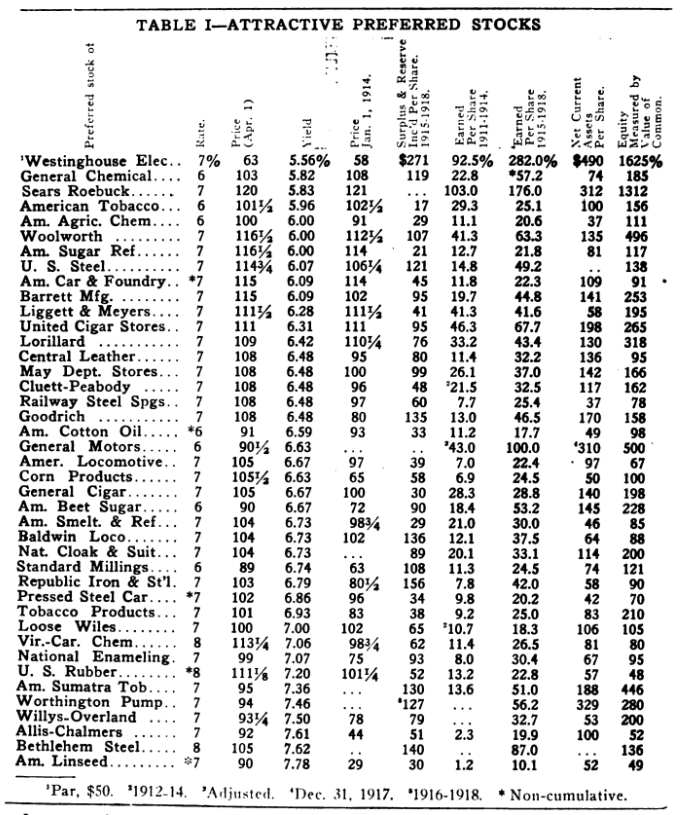