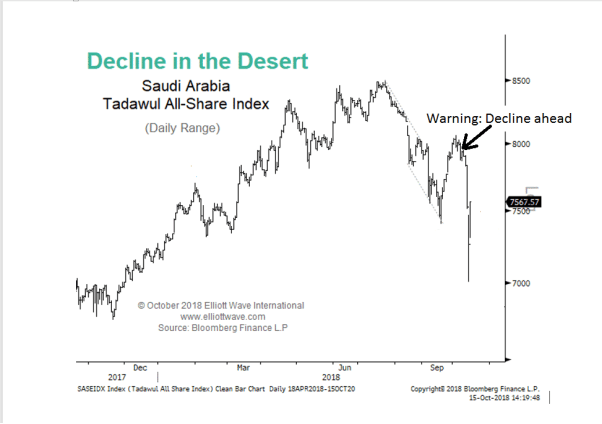 The disappearance and possible murder of Washington Post reporter Jamal Khashoggi is dominating the recent news cycle. But the resulting U.S. – Saudi Arabia tensions did not cause the collapse in Saudi equities nor any move in crude oil. As is usually the case, it’s the other way around.

Recent headlines reflect conventional thinking: “U.S.-Saudi Tensions Pushing Stocks Lower” and “Oil Prices Waver On U.S.-Saudi Tensions.” The mainstream default position is that “news” or “events” cause markets to move. Prechter’s Socionomic Theory of Finance, however, clearly proves that news has no bearing at all on markets. In fact, the social actions that cause news stories tend to come after markets have already moved.

Oil prices have been rising for months. The Saudi Arabian Tadawul All-Share index most recently topped out in July, but it was already down 60% from its peak twelve years ago. We warned readers on 8 October that another declining wave in the Saudi Arabian index was probably starting. And, we anticipate a continued decline in the weeks ahead, regardless of the outcome of the situation with the missing journalist.