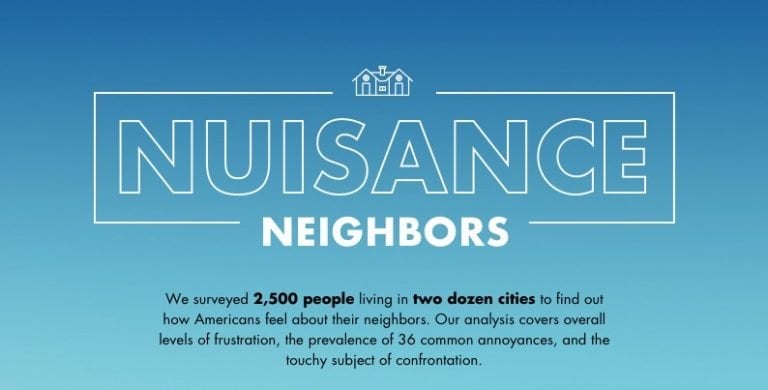 Whether you own your own home or choose to rent, there’s one thing we all have in common: neighbors.  Some we love and others drive us absolutely crazy. In a recent national survey of the American public, Improvenet set out to identify two things.  First to identify the cities in American with the most annoying neighbors and also to found out the most common complaints neighbors have in each city.

To do this they surveyed 2,500 people living in two dozen cities across the United States to find out which cities have the worst neighbors.  Their analysis covered overall levels of frustration with nuisance neighbors, the prevalence of 36 common annoyances, and the always touchy subject of confrontation.

Listed below is the rankings of the most annoying neighbors in America:

They also looked at the things that annoy us most about our neighbors.  Listed below is the top 36 annoyances as well as the worst city for each complaint.

The survey also found that over 54% of American have actively confronted a neighbor about their bothersome behavior.

The preferred methods of confrontation for a majority of Americans is listed below: .

Without question the leading offender was noise. Americans tend to get very angry regarding noisy neighbors.  Loud music was the biggest offender on the list but loud kids and pets also made the list.  The full analysis about annoying neighbors in American can be seen in the graphic below.