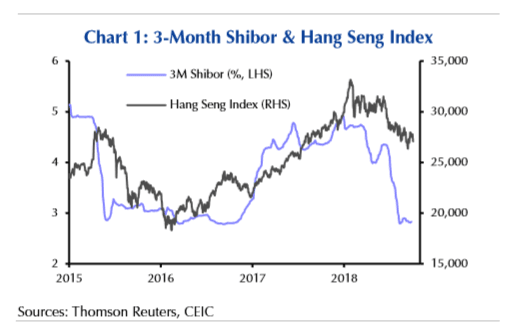 For more than three years, the Italian 10-year government bond yield traded in a range with 2.5% serving as a market top of sorts. Then in June, that level was broken, with both fundamental and technical influencing markets. The higher rates result, in part, from budgetary issues that the EU has faced before, most notably in Greece. The moves higher in European rates come as a Capital Economics report notes that monetary easing, sending rates lower, isn’t altering China’s “gloomy” outlook for equities. As the US recovers from the still largely unexplained market drop of October 9, China remains meaningfully underwater in terms of both debt and its stock market.

If Italy is headed for a debt crisis, it would be “horrific,” according to a May 2018 report from the Peterson Institute for International Economics. But it is unclear if Italy is headed for significant problems or is just experiencing rising interest rates due to robust economic growth. But what is clear is that when the ten-year note hit 3.58% last Friday, it was the highest level for rates since 2014.

The higher rates come as Peterson noted a “political backlash to slow growth and immigration has produced the least cooperative government imaginable, a coalition between the left-populist Five Star Movement (M5S) and the right-populist Lega.”

The convenient combination of populist movements on both sides of the political spectrum had been cause for concern, particularly as recent budget negotiations are getting heated. The European Commission wrote to Italy’s Finance Minister more than a week ago stressing that Italy must abide by EU budget rules. This drew a sharp response from Italian Deputy Prime Minister Matteo Salvini, which Capital Economics noted “maintained a confrontational tone.”

Today the situation escalated as a report from European Commissioner Guenther Oettinger said Italy’s 2019 draft budget was not in line with EU guidelines.

To Peterson, one of several concerns is “Italy’s interconnectedness and size.” Without mentioning OTC derivatives, the report worried about a “contagion” if the incoming populists continue on a “collision course with financial markets.”

The differential between concerns over debt and manufacturing economic growth are also operating on a slightly different if at times parallel track in China, where equities have failed to rally after the US-led market sell-off of last week.

More worrying to Capital Economics is not the 4% drop in the Shanghai Composite on Monday, which “was not surprising.” More worrying was the fact the People’s Bank of China (PBOC) announced that it will significantly cut the required reserve ratio for banks, an attempt to ease monetary policy, and such actions were met with a stock market sell-off. The Hang Seng index greeted the move with a 1% price drop, leading Capital Economics to speculate in an October 8 report “China’s stock markets will slide again later this year.”

The expectation for further losses in Chinese equity markets come as the PBOC is nonetheless expected to follow up its stimulative moves with though we expect the PBOC to follow up its RRR cut by lowering its de facto policy rate (the 7-day reverse repo rate) soon. In our view, the central bank will respond to further signs that the economy is struggling, partly due to US tariffs, but mainly for domestic reasons.

The argument that debt and non-traditional stimulus, in the form of quantitative easing in China’s case, engineers growth China’s stock markets will slide again later this year, even though we expect the PBOC to follow up its RRR cut by lowering its de facto policy rate (the 7-day reverse repo rate) soon. In our view, the central bank will respond to further signs that the economy is struggling, partly due to US tariffs, but mainly for domestic reasons.