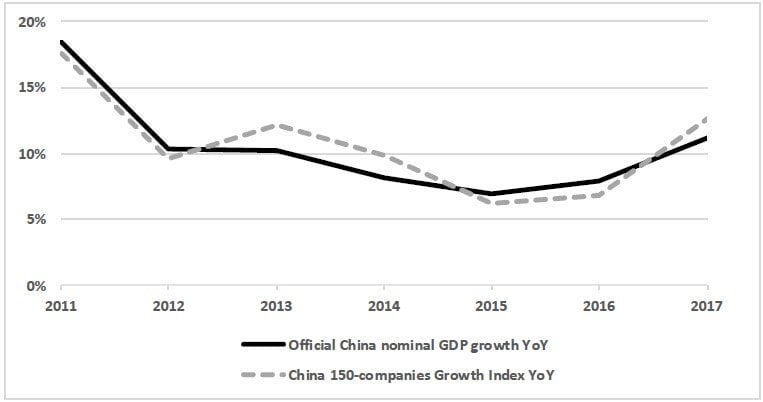 A study published earlier this year in the Journal of Chinese Economic and Business Studies, co-authored by Professor Peter Williamson of Cambridge Judge Business School, outlined an alternative benchmark for China’s GDP figures based on 150 large companies listed on major Chinese stock exchanges. An article about the study was posted at that time on the Cambridge Judge website. That index has now been updated for all of 2017 and the first half of 2018.

On 21st of February 2018 the Journal of Chinese Economic and Business Studies published the article “An alternative benchmark for the validity of China’s GDP growth statistics”. The data in this research was over the period 2010 to 2016.

Now all of the 150 companies included in the China 150-companies Growth Index published their 2017 annual figures and the 2018 First Half results. An update of the Growth Index for the interested parties seems appropriate.

The Company results in China are typically published starting 7 weeks after the Quarter. As the NBS is publishing the official GPP growth figures typically 6 weeks after the Quarter, i.e. the China 150-companies Growth Index. This means that once the NBS is publishing the GDP growth figure of the Growth Index is lagging one quarter. The trend, however, is clear

Growth of China's nominal GDP vs. the China-150 Growth Index with the 2017 figures: the Growth Index remains “more volatile between years” than the official GDP figures

The 2017 figures are now included. After 2 years where the official GDP was higher than the benchmark (2015 & 2016), now in 2017 the China 150-companies Growth Index is higher than the official GDP. High growth firms in 2017 are internet companies like JD.com, Alibaba and Tencent. Also fast growers are the home appliances companies (part of the consumer goods sector) Midea, Haier & Gree and the metal & mining companies like Yancoal, Hesteel and Baowu Steel Group, partly due to the around 30% higher coal prices in 2017. One interpretation of the higher volatility of the Growth Index between the years is that the statistical methodologies used by National Bureau of Statistics of China result in a degree of smoothing between years (and quarters).

Quarterly growth of nominal GDP vs. the China150-companies Growth Index 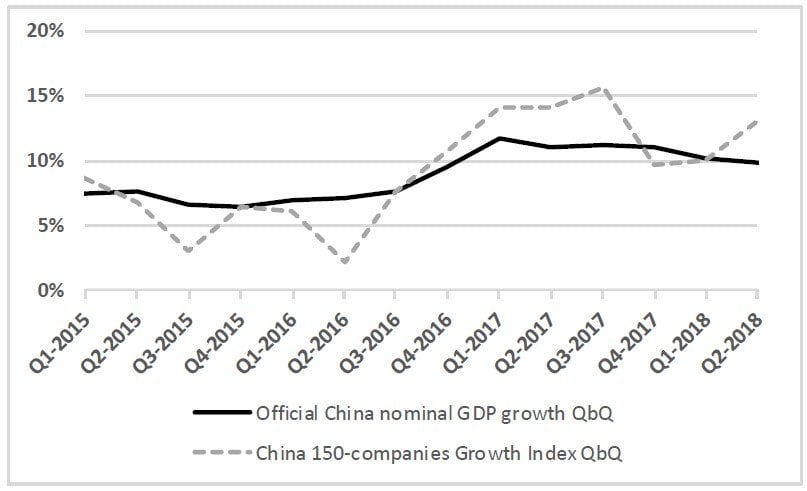 The cumulative total variance over the 14 quarterly periods is 3.6% for the whole period or a relative small 0.25% per quarter. The China 150-companies Growth Index is more volatile, supporting the idea that the statistical methodologies used in China result in a degree of smoothing between quarters (and years) in the official GDP numbers as reported by the National Bureau of Statistics (NBS) of China.

Data details – for producing own graphs