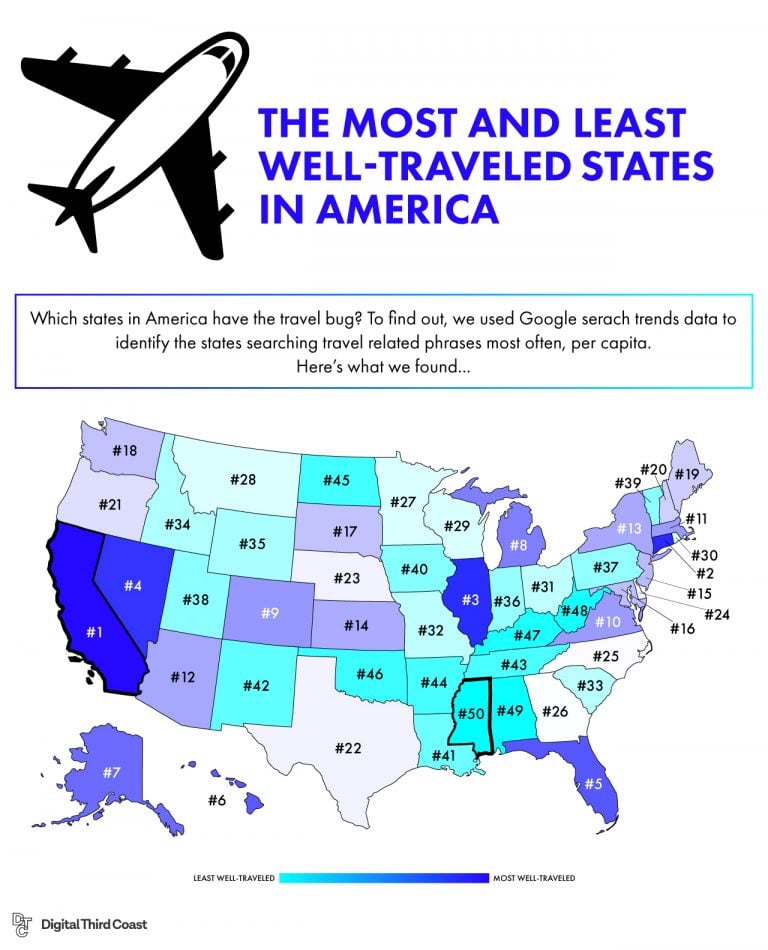 Traveling is something many people dream of doing, but don’t always take the plunge. In fact, even some of the most well-traveled Americans fall behind other countries when it comes to actually cashing in their vacation days and taking time off from work.

As many people turn to Google for inspiration and help coordinating their vacations and trips, we found that search phrases for terms like “Airbnb,” “airline tickets to,” “booking.com,” “cheap flights,” and many more revealed where the least and the most well-Traveled Americans were located.

According to the search engine results, Californians are the most well-traveled people in the country, and have the highest average monthly search volume, per capita, than any other state. Rounding out the top 10 most well-traveled Americans are residents of Connecticut, Illinois, Nevada, Florida, Hawaii, Alaska, Michigan, and Colorado.

While those living in the top 10 states are ready for their next adventure,  Digital Third Coast wanted to identify which states do the least amount of traveling. Whether they’re comfortable in their home state or they’re saving their money for other things, the following ten states are home to the least well-traveled Americans: Coming in at number 50 is Mississippi, preceded by Alabama, West Virginia, Kentucky, Oklahoma, North Dakota, Arkansas, Tennessee, New Mexico, Louisiana and Iowa.

The data revealed some interesting trends across the country. Some of the least well-traveled Americans fell within the southeastern part of the United States.

Many of the states with the highest travel-related search volumes have some of the largest airports in the country; California is home to LAX, SFO, while Illinois has both ORD and MDW, and Colorado has DEN. A surprising addition as number two on the ranking, Connecticut, has two smaller airports, but clearly travel-hungry residents ready to explore the world!