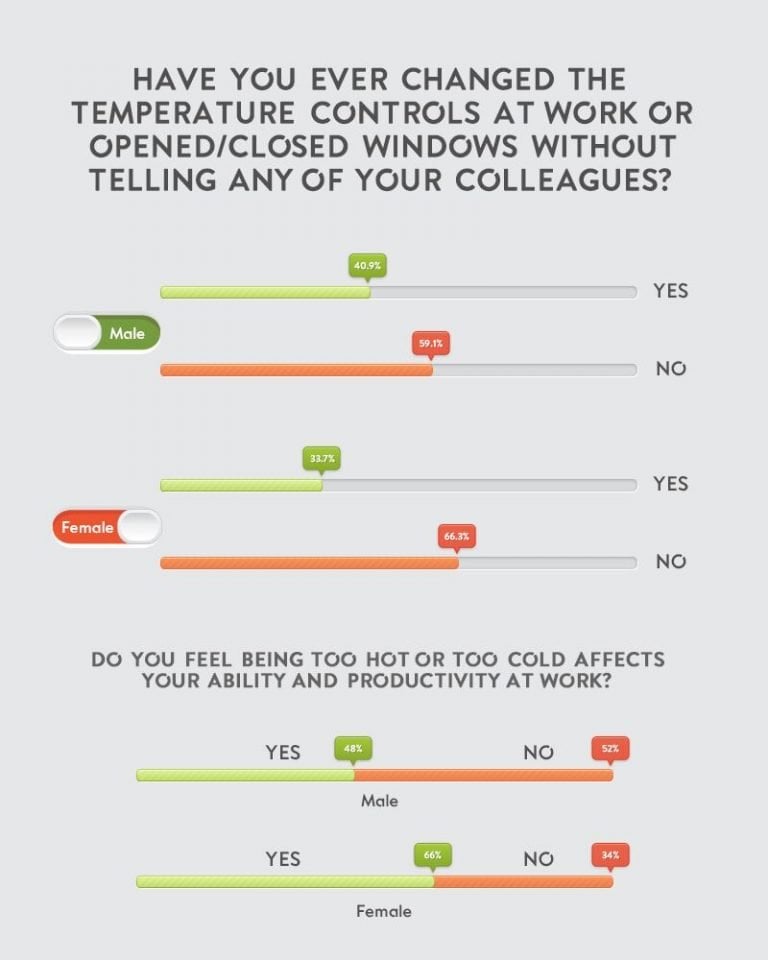 The end of summer is either a time for lamenting the loss of sunshine or looking forward to cosy nights in watching TV and snuggling on the sofa. But one area of dread with the changing of the seasons is coping with the drop in temperature and for women this is a much more common problem, particularly in the work place.

With nearly half of the UK having experienced tension at work because of temperature and arguments over the air con rife in many office environments, Insulation Express has asked the nation why temperature is such an issue.

And it’s not just the UK where temperature is an issue with Cynthia Nixon asking that rooms be heated to the correct temperature for women, at 24°C during her campaign to become the governor of New York.

Discover the reality of the office temperature wars and why women are the ones being left in the cold.

2% of UK office hours are lost to temperature arguments

In the UK, the minimum temperature for the workplace is 16°C and there is no upper limit.

In a study by the BBC it was discovered that these guidelines aren’t enough as arguments over temperature are taking up 2% of all working hours in the UK and costing the economy an estimated £13 billion a year. 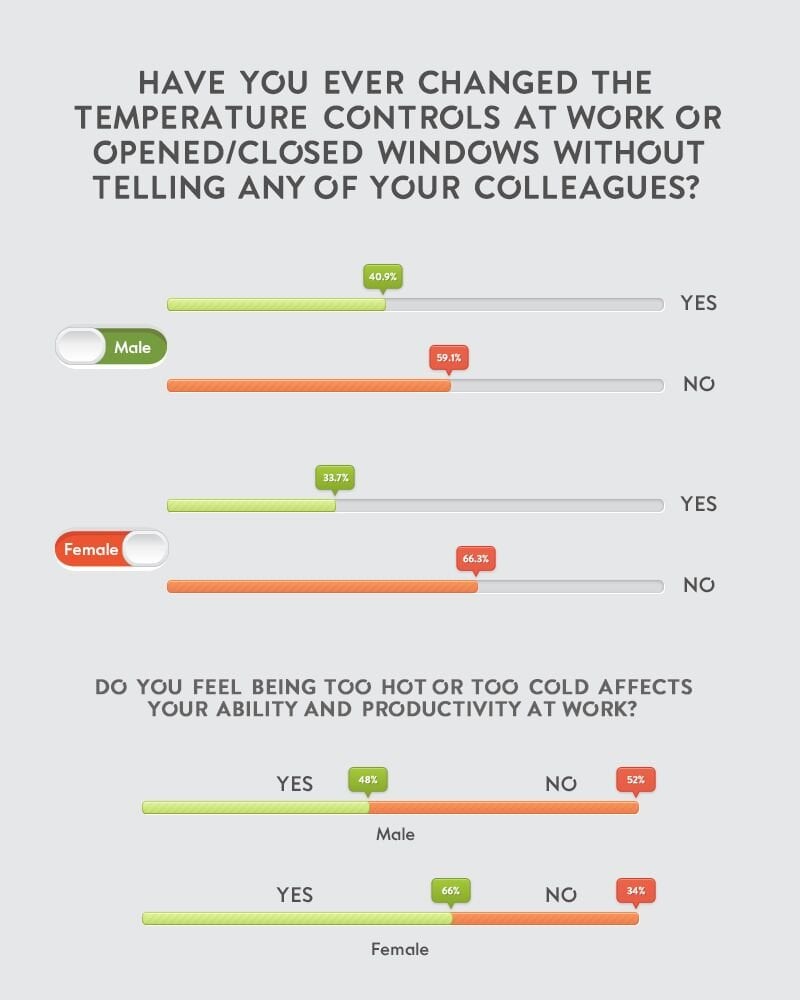 Women are less likely to change the temperature at work

Women have reported using blankets and portable heaters to cope with the cold at work and this can be explained by the outdated aircon formulas which are sexist.

A 2016 study found that air con systems were created with the metabolic rate of forty-year-old men weighing 70kg in mind. This means that many work spaces are unable to provide women with a comfortable working environment. 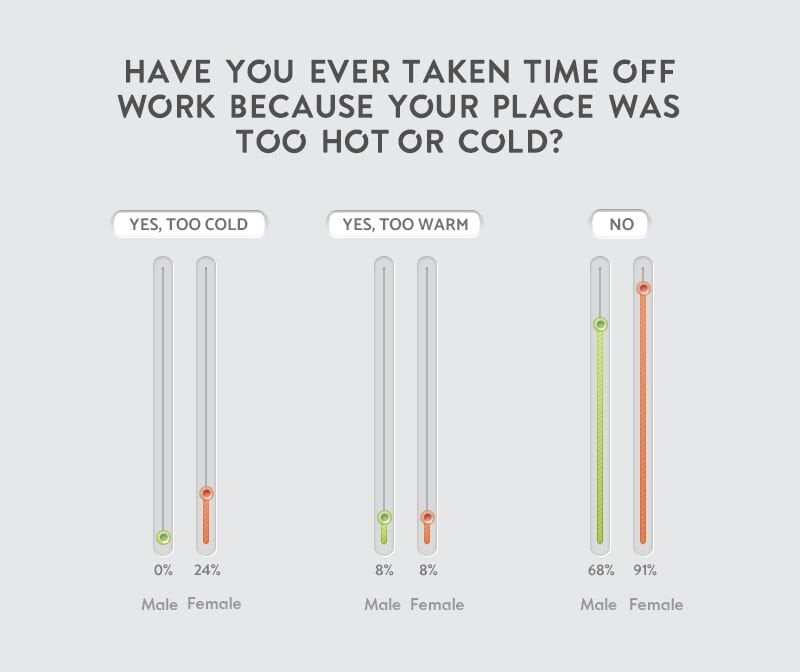 Women’s metabolic rates already work differently to men’s, but the menopause and health problems can also impact the way that women experience temperature.

70-80% of those with a thyroid problem are female and this condition affects metabolic rate and temperature control.

Many women report worrying about being viewed as weak or the possible embarrassment of discussing hormonal imbalances and the menopause makes temperature a taboo in the workplace for many professional women.

The idea that women are colder than men may seem like an outdated tradition, but studies provide evidence that women require a temperature that is 2.5°C higher than men. In general, men carry more muscle than body fat in comparison to women and muscles makes creating heat far easier.

It’s not just women who could benefit from higher temperatures in the workplace.

A study at Cornell University also found that increasing the temperature from 20 to 25°C led to typing errors reducing by 44% and typing output rising to 150%. 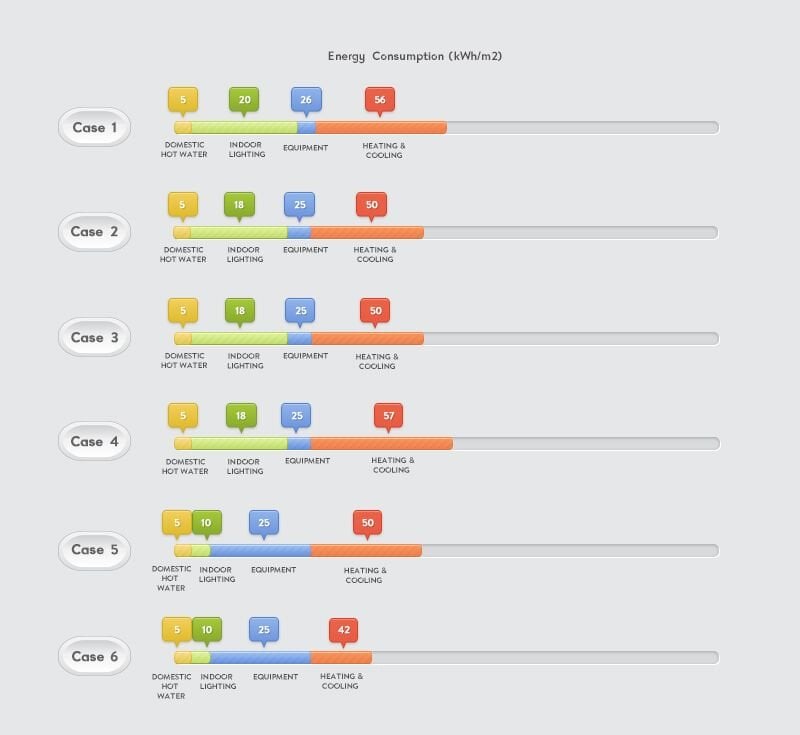 Getting the temperature right in communal spaces is always going to be tricky as temperature is a personal thing. However, the evidence suggests that women are more often putting with the cold while their male counterparts are comfortable with the temperature.

Wellbeing in the workplace is key to productivity and long-term success and for professional women, working in a comfortable temperature will only boost their ability to work to full capacity.