Apple has officially unveiled the iPhone XS Max, which is the biggest and most expensive smartphone it has ever made. Consumers and industry experts would be forgiven for seeing it as Apple’s response to Samsung’s latest Galaxy Note 9 flagship, which debuted last month with a giant screen. They also have a similar price range. The two phones will cater to the same segment. So, let’s dive into a detailed iPhone XS Max vs Galaxy Note 9 comparison to see how they stack up against each other.

The Note 9 is thicker and taller than its rival because of the S Pen stylus, which is stored within its chassis. On the back panel, the Note 9 has a fingerprint sensor and dual cameras. The iPhone XS Max lacks the rear fingerprint sensor as it relies entirely on Face ID, though it sports vertically aligned dual cameras on the back. The rear panel of both the handsets is made out of glass to enable wireless charging.

One major difference between the two is that the Galaxy Note 9 doesn’t have a display notch. The XS Max has a small cutout at the top that houses the TrueDepth camera sensors, front camera, and the ear speaker. Instead of opting for a cutout, the Note 9 has slim bezels at the top to accommodate the sensors. The notch has been a controversial design choice, but it has done little to hurt the iPhone X sales.

The iPhone XS Max and Note 9 displays are both made by the same company: Samsung Display. And both the phones use OLED screens. Last month, testing firm DisplayMate declared that the Note 9 display was the best they had ever tested in the lab. It was as close to perfect as it could get. The iPhone XS Max display hasn’t been tested yet. But given Apple’s expertise in color-reproduction, it should be as good as or better than the Note 9.

The Note 9 sports a 6.4-inch Quad HD+ Super AMOLED Infinity display. It has a resolution of 2960 x 1440 with 514ppi pixel density. Even though the Note 9 has a slightly smaller screen than the XS Max, it has more usable display space because it doesn’t have a display cutout.

The iPhone XS Max gets a 6.5-inch Super Retina HD display. It has a resolution of 2688 x 1242 with 458ppi pixel density. Images and videos on both the devices will look crisp and sharp.

RAM, storage, battery size – these are some of the most important features we look at when buying a new phone. Both the Note 9 and XS Max sport some of the most powerful chips available to smartphone vendors. In fact, these devices are more powerful than many laptops.

The Galaxy Note 9 is powered by an octa-core Snapdragon 845 processor, which is the most powerful chipset available to Android vendors. In contrast, the iPhone XS Max runs Apple’s custom A12 Bionic chip based on the 7nm manufacturing process. Benchmark tests have shown that last year’s A11 Bionic was more powerful than the Snapdragon 845. The A12 should only widen its lead over the Snapdragon 845.

Samsung offers the Note 9 in two RAM options: 6GB and 8GB. The phablet is available in 128GB and 512GB internal storage options. If that’s not enough for you, the Note 9 also supports up to 512GB of external storage, theoretically giving you 1TB of total storage. Apple hasn’t revealed the RAM size of the XS Max, but the rumor mill expects it to be 4GB. The XS Max comes in 64GB, 256GB, and 512GB of storage options. It lacks a microSD card slot.

The Note 9 packs a huge 4,000mAh battery with fast charging and wireless charging. It easily lasts more than a day of normal usage despite the phone’s giant display. Apple hasn’t revealed the iPhone XS Max’s battery size, but claims the new phones will last one hour and a half longer than the iPhone X, which already had a decent battery life.

Both the iPhone XS Max and Galaxy Note 9 sport dual cameras on the back – a wide-angle lens and a telephoto lens. The dual camera setup allows you to capture sharp images from longer distances or take photos with blurred backgrounds. Both the phones have some special AI tricks up their sleeves to enhance the picture quality, but most of the casual users will not notice any huge differences between them.

The iPhone XS Max has a 12MP wide-angle lens with an f/1.8 aperture and a 12MP telephoto lens with f/2.4 aperture. Both the lenses support optical image stabilization. The XS Max camera offers up to 2x optical zoom and 10x digital zoom. It is capable of capturing 4K videos at 24fps, 30fps, and 60fps. Apple’s flagship also offers stereo recording and optical image stabilization for videos. The iPhone XS Max has a 7MP front-facing camera for selfies.

The Note 9 camera setup consists of a 12MP Super-Speed Dual Pixel wide-angle lens with variable apertures of f/1.5 and f/2.4, and a 12MP telephoto lens with f/2.4 aperture. The variable aperture functionality in the wide-angle lens allows it to automatically switch between the two apertures depending on the lighting conditions to take the best possible shot. The Note 9 rear camera also offers 2x optical zoom and 10x digital zoom.

Samsung’s phablet sports an 8MP front camera, which is impressive. The Note 9 also gets a couple of AI features such as the Scene Optimizer and Flaw Detection. The Scene Optimizer analyzes the scene and the object using AI and then automatically adjusts the white balance, saturation, contrast, and brightness to take stunning pictures. The Flaw Detection feature notifies you instantly after clicking a picture if something is wrong with it, giving you an opportunity to click another photo without losing the moment.

The Galaxy Note 9 has a pill-shaped fingerprint sensor on the back for authentication and security. As an alternative, it also uses a combination of iris scanning and facial recognition for unlocking the device, but this method is not secure enough to authenticate financial transactions. Biometric security has become one of the biggest selling points of smartphones as people are increasingly using their devices to send payments and store key documents such as airline boarding passes.

The software is where ecosystem comes into play. Apple has built a strong iOS ecosystem that does a good job keeping users tied to Apple devices. The XS Max runs the iOS 12 software out of the box. The new software will improve performance and energy efficiency. It will also bring new features such as Siri Shortcuts, Screen Time, a better Control Center, improved notifications, and a revamped Stocks app.

The Note 9 gets a couple of special features that you won’t find on Apple’s XS Max. They are the S Pen stylus and the DeX desktop experience. The S Pen allows you to take quick notes and easily navigate through the Note 9’s interface. It also offers Bluetooth connectivity to let you control PowerPoint slides, switch camera modes, use apps like Spotify, and control music. The new S Pen takes less than a minute to charge when you reinsert it into the Note 9’s holster.

The DeX allows users to turn their Galaxy Note 9 into a full-fledged desktop by connecting it to a monitor via an HDMI adapter. Of course, you’ll also need a keyboard. The phablet itself serves as the trackpad. The iPhone XS Max lacks this capability. And Apple has kept the stylus support exclusive to the iPad line. 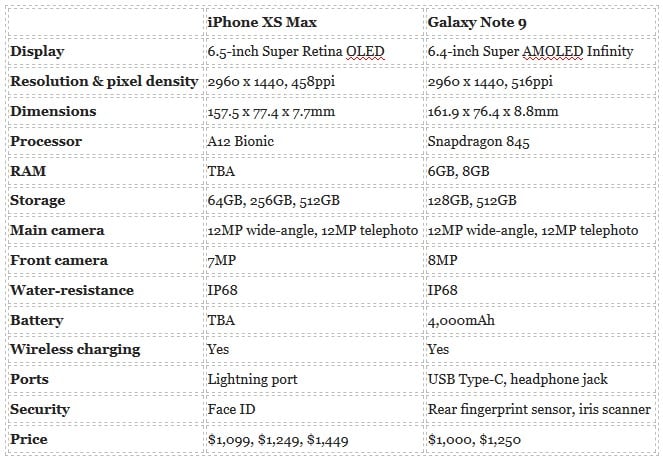 Both the iPhone XS Max and Galaxy Note 9 represent the most advanced technologies from Apple and Samsung. Samsung’s device focuses on productivity and gaming. The iPhone XS Max with its slimmer design, refined software, improved camera, and tighter integration between software and hardware could appeal to both enterprise and casual users.