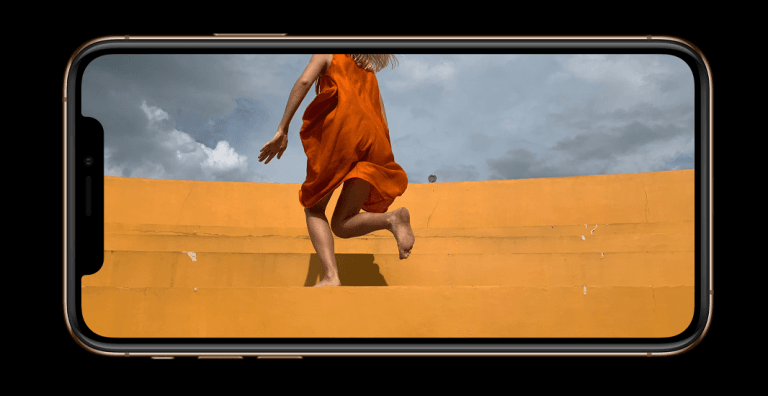 Since the iPhone 6 Plus, Apple has offered the iPad-like landscape mode features on all the Plus variants. Last year’s iPhone X launched without the landscape mode even though its screen was technically larger than iPhone 8 Plus (which supported landscape mode). It allows you to turn the device to its side and the home screen icons would rotate horizontally. However, the iPhone XS Max home screen doesn’t support it despite sporting a gargantuan 6.5-inch Super Retina display.

The iPhone XS Max home screen doesn’t rotate horizontally, and it isn’t because of any bug. It’s just that the device’s home screen doesn’t support landscape orientation. Apple didn’t specify why it deprived the XS Max of the feature you’d find on older Plus-size iPhones. It could be because of the top cutout that accommodates the TrueDepth camera, the selfie camera, ear speaker, and other sensors.

The notch divides the status bar into left and right halves. It could cause UI problems if the iPhone XS Max home screen supported landscape orientation.

Or it could be because Apple’s software team is far behind its hardware team. As Mark Gurman of Bloomberg points out, the iOS software is not fully optimized to take advantage of the XS Max’s giant screen. It not only lacks the landscape home screen support but also the keyboard sits in the center of the screen in landscape orientation rather than being widened. It also lacks picture-in-picture mode, and drag-and-drop between apps. These could have been great ways to take full advantage of the 6.5-inch display.

It supports landscape mode in apps, though

The XS Max-specific UI will not only display more content but also present new options in landscape mode. For instance, the Contacts app will display all your contacts on one side in landscape layout, and the details of a specific contact on the other side.

The XS Max sports the largest ever display in an iPhone, which makes it great for watching videos and playing games. In terms of specs, it is nearly identical to the iPhone XS except for the screen size and battery. Apple claims the XS Max battery lasts an hour and a half longer than last year’s iPhone X. It means you can expect about 25 hours of talk time and 15 hours of video playback on a single charge.

It is powered by the A12 Bionic chipset, which is faster and more energy efficient than its predecessor. Benchmark tests have shown that the new iPhones are far ahead of their Android rivals. The device also gets an upgraded camera with Depth Control feature that allows you to adjust the blur in portrait images after clicking. The XS, XS Max, and XR are also the first iPhones to feature dual-SIM functionality – one of them will be a physical SIM and another will be eSIM. Here’s all you need to know about eSIM and how it works.

Despite its ridiculously high price tag, the iPhone XS Max appears to be selling far better than expected. According to TF International Securities analyst Ming-Chi Kuo, the XS Max sales are 3-4 times higher than that of XS. The XS starts at $999 while the XS Max costs $1,099 for the base model. Kuo added that the 512GB model of both the XS and XS Max was constantly out of stock due to limited supply.

The 256GB storage has been the most popular variant of the XS and XS Max. The 64GB storage is too little for people who store a lot of photos and videos on their iPhones, and the 512GB is too much (and too expensive). Kuo told clients that the gold and space gray colors were far more popular than the silver model. The analyst expects Apple to sell 75-80 million units of the XS and XS Max by the end of this year. The relatively cheaper iPhone XR would start selling on October 26th.