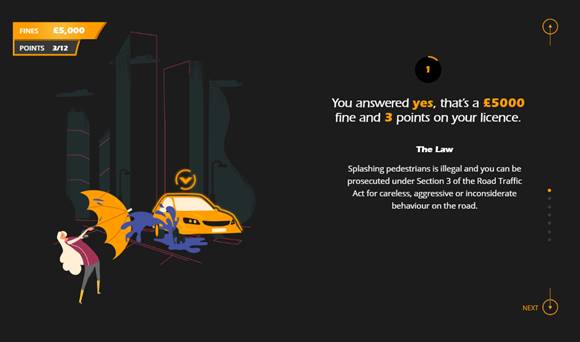 We all think we know the rules of the road. But there are a few less common rules that we have found, that people are either unaware of, or straight up ignore. Not recognising these British driving laws could easily add up to thousands of pounds worth of fines and enough points to lose your licence.

Select Car Leasing asked the public about these unusual laws, finding out how well people really know the British law. If you’re not in the UK and these British driving Laws don’t apply to you, you might be surprised at the tough British driving laws in comparison to your home turf.

A fifth of people have splashed a pedestrian in the last 12 months, risking a £5,000 fine and three points

1 in 5 people have admitted to having splashed a pedestrian in the last year. The law states that splashing a pedestrian could lead to prosecution for violating British Driving Laws such as the Road Traffic Act for careless, aggressive and inconsiderate driving.

4 out of 10 pet owners are risking nine points and a £5,000 fine by letting their pet roam free in the car

We all know that seeing a dog ride the passenger seat in the car is cute, but the drivers could land themselves in a lot of trouble if the police ever decided to enforce the actual law. As, under the highway code, animals must be suitably restrained when driving.

Number plate a bit mucky? This could cost you £1000

If you’ve driven somewhere a bit muddy and haven’t cleaned it off your number plate, it could lead to a fine under the Vehicle Excise and Registration Act. According to our study, one in ten people have been driving with an ineligible registration in the past year.

Using a SAT NAV or mobile phone that isn’t securely fastened down could cost you £1,000 and six points

Use your phone as a Sat-Nav? Don’t always have it securely fastened down? Apparently, 1/3 of you do, and it could lead to a serious hit on your wallet and half the required number of points it takes to lose your license.

Flashing another car to warn of a speed trap will cost you £1,000 in fines

To many drivers, around a fifth of you in fact, it may seem courteous to let other drivers know that they are approaching a speed trap. But would you be so helpful if you knew you’re risking breaking British driving laws and a £1000 fine each time you do it?

The snow this winter could have been more than an irritant for 31% of you. As that’s how many admitted to driving off without sweeping the snow off your roof, which could have led to 3 points and a relatively minor £60 fine.

Using your phone to pay in a drive-through could land you with £1,000 fine and 6 points

Unless you have your handbrake on and the engine off, using your phone for any purpose is forbidden. And that includes paying on your phone. Of those that had visited drive through in the past 12 months, 71% admitted to using their phone while waiting with the engine on.

Select Car Leasing have created a quiz so you can find just how many of these strange British driving laws you are breaking. Test your knowledge here.