ValueWalk
Home Business Charter CEO Tom Rutledge “Not a lot of scale advantages for us... 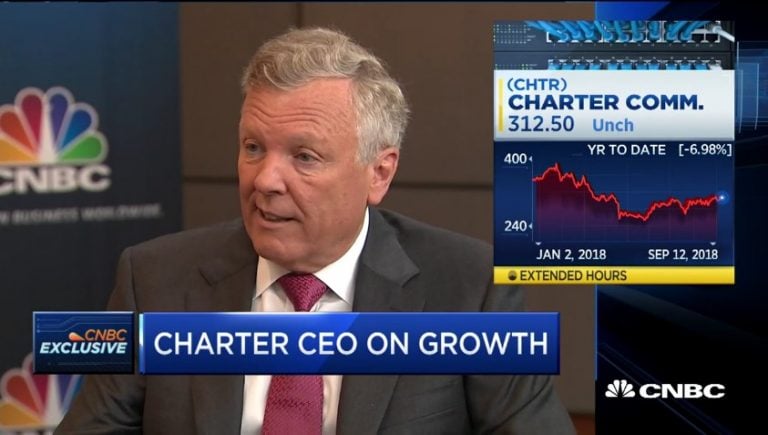 WHERE: CNBC’s “Squawk on the Street” – Live from Goldman Sachs Communacopia Conference in New York City

Charter CEO Tom Rutledge: We see nothing greater than our own customer creation machine

Charter CEO: We see nothing greater than our own customer creation machine from CNBC.

David Faber: welcome back to "Squawk on the street." from Goldman annual communicopia conference where there is a plethora of guests involved in the communications and media companies including my next guest. Tom Rutledge is the CEO of Charter. Every year we sit down at the liberty annual festival, if you want to call it that. I want to talk to you a bit about targets. You and I have spoken through the years when you were in the midst of and completing the huge deal to acquire both time Warner Cable and the bright house networks. You put targets out for adjusted ebita and revenues in 2018 and 2019. I took a look. You are not hitting them. 45.6 billion in revenues was expected this year. 17.8 billion in adjusted ebita. You are going to be below that. Why did you not reach the targets? You originally put out a number of years ago of course in the proxy when you were in the process of completing those deals.

Tom Rutledge: the proxy wasn’t a target. It was our business plan for why we did the acquisition. It was actually in a different timeframe than the actual completion of the deal -- it was in a different timeframe. We are actually on our plan in terms of the timing of the investments we are making, creation of customers that we expected. The marketplace has changed. Remember, we were in a two-year chase. Comcast was involved at one point. That deal was denied then we bought the company. So it took more than a year to close the deal even after we got a new deal because of the regulatory process. So we didn’t actually close that deal in the timeframe that the proxy statements were --

Faber: right and its fair, summary of the forecast regarding projected anticipated future operations, but to be fair as well your stock did run up to a certain extent that it has not seen again based on investors’ belief that those were forecasts that conceivably would be met.

Rutledge: I’m not sure why the stock price ran up. I think there were other factors besides our actual operating performance. You know, that is really the issue. We have an operating plan. We have a great set of assets and an opportunity to create value on those assets. Yes, there was speculation in our stock and there was m&a rumor in our stock none of which came to fruition. And the reality is we have a great set of assets and a great operating plan and we are executing that plan. We are achieving customer growth. We are growing nicely. We have had a very complex integration which we anticipated. We essentially had 11 companies from an operating perspective. We put them into one. At the end of this year we will have a single platform across the entire country where we can operate and execute, innovate and create products, a platform that other companies can develop their services on.

Faber: so the integration will be complete and a very difficult one given all the different operating entities when you brought them together. You mentioned m&a. Many people are familiar with the fact that the stock did go up to be fair on those speculations perhaps consolidation whether it was Verizon or Soft Bank. Do you regret or do you think back on that as a lost opportunity perhaps that might have been better pursued in some way? Many people believe it was your resistance to doing a deal that prevented it.

Rutledge: as I said, we have a great set of assets. We have an opportunity to create a lot of value. We think that what we are doing creates the most value for shareholders which was my objective. Remember when we closed this deal two years ago it was closed at about $190 a share. So we are at $310 or so today. It’s not open yet, but – in that range. We are up over 50% in a two-year period which is a pretty good result. It’s the kind of result we had expectations for the way I am compensated so we expect the company to perform. We expect it to perform well. All of our decisions with regard to who we talk to and what we do for m&a whether we are the acquirer or whether somebody wants to talk to us is to the benefit of the shareholder. We think that what we are doing is the most creative thing you can do for the shareholders.

Faber: and will result I assume in a stock price that might exceed anything discussed during that period of time.

Rutledge: that’s right all value is ultimately future value. We have a tremendous asset with lots of potential and with the potential of making proper investments, doing proper integration, getting the scale economics that we are getting and then using that to create that value. So when we look at all of the opportunities out there for us, we can’t see anything greater than our own customer creation machine.

Faber: yet you seem to be fighting something of an uphill battle. I say this having followed the industry lately and our parent company Comcast is part of this which is the focus on video sublosses that investors seem to have as opposed to looking at the whole and the broadband additions. Your last quarter was very strong. Is that going to change at some point? Do you sense or have a feeling for what it will take to have investors look here instead of here?

Faber: why is that what do you mean when you say that?

Rutledge: the capacity of our network, our fiber-based coax network is tremendous. We are at one gig everywhere in the united states by the end of this year. Capable meaning every customer passing that we serve can buy a gig of service from us. That was unimaginable a few years ago and it was done with very little capital investment. We have a pathway to get the ten gig symmetrical. It is hard to imagine what you can use it for.

Faber: although we always seem to figure it out.

Rutledge: we do and I think there is a whole new set of products that are going to come along, entertainment products, virtual reality products, three dimmensional halographic prodcuts. It will be the new forms of entertainment, information, education that people use five years from now, ten years from now. Our networks are capable of carrying those products. I think we have a great situation from a connectivity perspective. So what is happening is the video marketplace is changing. It became fully priced and fully distributed. And the prices got very high and they are pushing consumers out of the market just through price. There is very little ability on our part to constrain that price.

Faber: we have talked about that a lot through the years. It’s been an enduring frustration for you. Now the bundle is some falling apart. You doing what you can to offer skinnier opportunities to consumers.

Rutledge: we are offering a range of opportunities for consumers. All opportunities. We are completely agnostic or uncaring I guess is a better word about what companies are using our networks to get video to their customers. We think we can aggregate content from Netflix in fact we are inegrating Netflix with our user interface. We are selling Netflix to consumers who don’t have it. It is in our interest to make the consumer experience with us be good no matter who the video provider is.

Faber: these days you hear about the threat to cable from 5 g. Yo talk about bringing capacity into the home that had never even been thought of not that many years ago. Everybody now is saying Hans Vestburg just was on stage here -- that 5 g represents a real threat to you by bringing in these huge capacities in a wireless fashion. Is it a threat to the cable industry?

Rutledge: 5 g is a technology. We have a better platform to deploy that technology, I think, than the cellular industry does because we are fully distributed from a high capacity wire line perspective. If you think about what 5 g is, it is small cells. Small cells mean you need lots of wired line connectivity to make the small cells work. We think we are actually in a better position to do that than traditional cellular companies. Yes, 5 g can be used to compete against us. It is very capital intensive. It requires essentially a wire line network like a FIOS to support the small cells. If you look at their forecast, they will build 30 million homes over a ten-year period. Ten years from now there will be 140 million homes in the united states. They will have 20% of the homes. Our foot print would represent eight percent of the homes. We think it is something to be thoughtful about. We think generally we have a better network. We can have better products. Ten years from now we will be 10 gig symmetrical.

Faber: we mentioned m&a. The regional sports networks that will be sold by Disney, a lot of them out there. You own a few in la most prominently. Any interest in being a potential buyer of some of those?

Rutledge: we only are in l.A. Sort of by default. We bought them in the transaction we have not been a buyer of content. Lots of content has been presented to us recently. We haven’t purchased any. There is not a lot of scale advantages for us being in the content businesses. If we were to be in that business it would have to be priced right and not really a synergistic opportunity..

Faber: tom, as always, very much appreciate you taking some time. Tom Rutledge, CEO of charter.