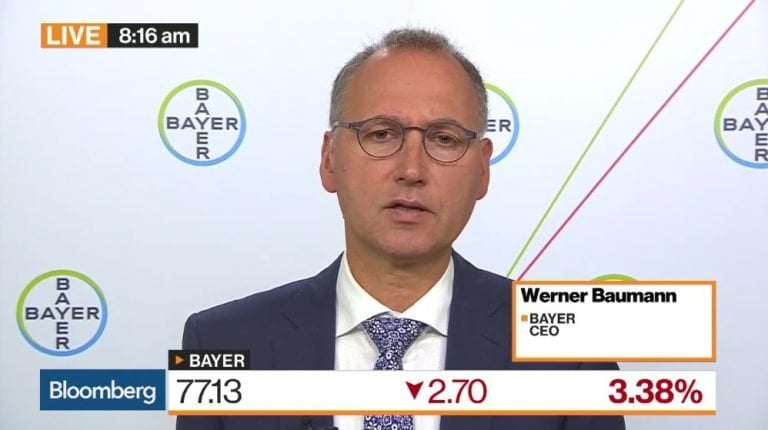 What are you what are you learning from the market's reaction to your forecast. You see the shares falling this morning is that unexpected or did you know this was going to be this was going to happen when you started into buy Monsanto and started finishing up that acquisition.

Well I assume. Thanks for the question and I assume that all communication has not been fully understood and digested. I think it's very important to know that you've seen another quarter of growth in the second quarter of it are up by a standalone businessV.R. up in our core earnings per share in our earnings. And we have confirmed the full year guidance for the buyout business the fact that you are alluding to that the earnings per share are lower than so far Guyatt it is a technicality because we are closing the month rental business a little bit later than we had expected and the earnings of Monsanto that haven't generated this year come to us to a large extent as cash flow rather than reported earnings but also the ones business is very healthy it is performing in with our expectations and the underlying earnings power is exactly where we thought it was going to be. So the very very positive for the combination of the businesses for the remainder of the year and we are also looking at the great prospects that we are now having as the leading a company in the world with the technology best products best regional reach and a very experienced and seasoned management team and our people are packed up and ready to go just to the point that your communication there are 19 buys on your stock right now and anyone sell.

I just checked the blame but. So the analyst community I kind of not getting it all kind of clits that the numbers that you're talking about and the outlook you just mentioned is that they should be focusing on better do you know do you have no regrets about the Monsanto acquisition the round the story. A

lot of people by surprise in terms of the size and scale I did it catch you by surprise did it make you come out to excuse the pun have a little bit of buyer buyer's remorse.

Well as I've said already if you look at the competitive strength that is now in place with the combination of the best take chemicals company in the vert and the best technology in the world. And the best and furthest advance actually has a further penetrate the digital the platform the higher integrity of the business the strength of the combined management team we are as excited as we have ever been about the combination. There's absolutely no regrets. I would say to the country we are totally excited. Now finally get going. And the fact that you have a single verdict that is in total position to the science and territories status with a product that has been used safely for 40 years there this absolutely no relationship between the use of the product and development of cancer diseases does not change a bit.

So that's just kind of pick that up a little bit. Were you surprised that what you're saying is it sounds like you were surprised by what happened in that verdict's. I'm kind of just sort of extending that a little bit say there were further surprises. What do you do you get into the realms of talking to your lawyer as a boss like sort of settlement plan how you would structure that.

I'm just wondering how you see the timeline rolling through Well again I stand firmly behind the safety and also backed up by the regulatory state. All his life was saved. Globally regardless of where you go there are more than any great studies out there that confirm the safety of the product and also confirm that there is no cause and effect between the use of the product and the development of canso. And there is aU.S. government study that has run for more than 20 years with more than 1000 people and their significant other informations. That is the biggest real life evidence study that ever performed that confirms these results from the other stuff. From that perspective we see a verdict. A jury is in strong ocean with the science and the regulatory steps. Via Google to file the motions in the court and said this key Cisco in order to overturn this vote. We also going to go and appeal if Niddrie and we remain totally confident that this will continue to be in the market because it's a safe environment for the farmers that use it.

I mean I understand I hear you saying that Varner and I hear you saying that the mountain of ads on your side on the other hand here we have a jury which had that roundup causes cancer and as a war did I defend plaintiffs sorry eighty nine million dollars that's sure to come with reverberations financially for you which still lead to the question what's your strategy here. Do you quantify this and refuse to settle the case. Or is it something that you feel like maybe settling is the more prudent forward.

I can only repeat what I said. Life is a safe product. There is no absolutely no cause and effect in the use of Glaive fixate on one side and to develop bandsaw in this case non Hodgkin's lymphoma and we are very sympathetic. Quite frankly toMr. Dennis his family and the terrible disease he suffers from. There is no relation between the product and the product. And the onset of his disease and with it I already met Verville vigorously defend ourselves and this verdict is against all the psych data that is available. All too real life. And with that it is totally clear that we are going to defend all other cases vigorously.