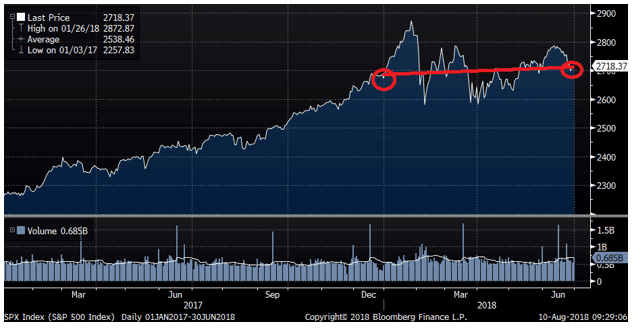 We are now at the halfway mark of the year, which always sets the stage nicely for a review of expectations coming into the year.[1] We will refrain from pounding our chests too mightily on our Bitcoin outlook considering we have no “skin in the game.” Our learning has continued amidst the price collapse, though we continue think patience and knowledge accumulation is worth far more than action in the crypto world. One of our primary expectations was for markets to spend the period digesting 2017 gains. Were we to draw a straight line from the S&P 500s closing price for 2017 to the 2018 first half closing price, it would certainly look like digestion:

However, as we know, markets tend to move in fits and starts instead of straight lines. Digestion takes many forms and the chop we have experienced thus far in 2018 certainly is one of the more prominent forms. Alongside this expectation for digestion was our call for renewed dispersion between sectors and stocks. This looks prescient thus far and has been both rewarding and a source of opportunity that we are now hopefully taking advantage of.

Our most misguided expectation thus far has been the slope of the yield curve. We expected some steepness to begin emerging in 2018 and to date, the yield curve has actually compressed. The spread between the 2-year Treasury and 10-year Treasury has neared but not gone through the “inversion” level. This has been a headwind for net interest margin at banks, though it has not placed too big a hurt on the financial sector yet. This is largely due to abundant positives for the financial sector that have so far outweighed the negatives of a flattening yield curve.[2]

First quarter volatility gradually eroded during the course of the second quarter of the year. Markets were far calmer and technology stocks in particular exhibited considerable strength. We used the early quarter volatility to make five notable moves, closing out of two positions, doubling down on one and commencing two new holdings. The second quarter thus marked our most active quarter of portfolio activity since the second quarter of 2016.  We are especially excited about one of the new additions, for how we think this purchase elucidates our philosophy, process and discipline—Equinix, Inc (NASDAQ: EQIX).

We first learned of Equinix years ago and as many were wont to do, we dismissed the stock as merely another datacenter marketing itself for having recurring revenue while the primary asset depreciated rapidly and required constant replenishment. Slowly our view became more informed as we spoke with various investors and industry participants. The key factor that influenced our desire to truly dig in on in this company was the suggestion to read Tubes: A Journey to the Center of the Internet by Andrew Blum, in late 2015. We featured this as one of the “Best books we read” in our year-end 2016 commentary.[3] The central thesis of Tubes is that despite the Internet appearing rather abstract and terms like “the cloud” seemingly implying the Internet itself exists in the air, the entire edifice is built on a highly tangible, physical infrastructure that is essential to global connectivity.

Blum offered some of the following background on Equinix:

Following our intrigue, we did considerable work on Equinix. Our model suggested the price was fair and offered some upside, though not quite enough. Meanwhile the stock headed higher with hardly a pullback. As this happened, we remained current on the business and kept updating our thesis accordingly. We developed this hope that given Equinix’s prominence in REIT indices (it’s structured as a REIT) it would hit a growth hiccup concurrent with an uptick in rates and a yield-induced panic in yield sensitive sectors. As luck would have it, the confluence of negativity struck Equinix in the first quarter of this year, with investors in yield-sensitive stocks running for the exits. Equinix investors started fearing a slowdown in the long-term growth rate of the company due to “hyperscale” providers building more of their own infrastructure and comments alongside their first quarter earnings report that suggested indigestion of the Verizon assets acquired in Miami.

Needless to say, Equinix as it is positioned is a toll-road of sorts on the internet. While most people colloquially call this a datacenter company, Equinix is actually selling connectivity and specifically in scarce, but high value locations. The advantage Equinix boasts compounds as the company increases in scale and shows up in the company’s industry-leading margins and returns on invested capital. A quote from Interim CEO, President and Executive Peter Van Camp (PVC as they call him at Equinix) is emblematic of just how essential Equinix’ locations are:

“the subsea landing cables are, certainly, a great manifestation of the business model as well. There are actually more subsea cables being laid right now than there have been in the last 20 years. So these are cloud service providers forming consortiums, also with the networks and we’re the traditional ones that would lay these cables. But there have been 18 awarded in the past 18 months, I would guess, at that time, something close to that. Equinix has won 17 of them. And why have we won them? As that cable lands, all the traffic on that cable then needs to diversify and be spread to the networks and end destinations for whatever that data may be about. And so the logical place for a cable landing station is an Equinix data center, where it has the most immediate route, lowest latency to all of the end destinations for the data it carries. So this just continues to support this business model of interconnection and why we think we will always be in a strong, very relevant place about being the aggregation points for the digital world.”[9]

This is extremely important, because it is advantageous in and of itself for how it premiumizes the real estate within an Equinix exchange and Equinix in particular is the only company with true scale, globally. Moreover, it enables Equinix to push its business model even further. Recently, Equinix has been highlighting its ECX Fabric, which enables clients to be “in two places at once.” As the company explains:

ECX Fabric connects Equinix data centers all over the world to create an interconnected fabric of extremely fast connections. The connections are both virtual and physical. They make it possible for a Finnish company to connect to their brand office in Singapore almost as if they were physically in the same building… You can now connect to the cloud provider of your choice directly, bypassing the congested public Internet altogether. For example, AWS’s Frankfurt region is available in Equinix’ interconnection exchange in Helsinki.[10]

Two and a half years after really digging into this company and taking a liking did we finally feel we could underwrite the investment in pursuit of our return expectations. We think buying this stock with an approximately 6.25% yield on adjusted funds from operation with a 45% payout ratio and a long runway of double digit growth will be looked upon years down the line as an outstanding bargain.

We know there are more such future opportunities lurking in our watchlist and we are excited by how with each passing year our watchlist grows in multiple directions. We are increasing the number of companies that we know and we are accordingly increasing our depth of knowledge on each company populating our watchlist. We maintain this list alongside the price at which we would be ready and willing to step in and buy any one particular company.

Thank you for your trust and confidence, and for selecting us to be your advisor of choice.  Please call us directly to discuss this commentary in more detail – we are always happy to address any specific questions you may have.  You can reach Jason or Elliot directly at 516-665-1945.  Alternatively, we’ve included our direct dial numbers with our names, below.

[10] Interconnecting the Globe One Subsea Cable at a time