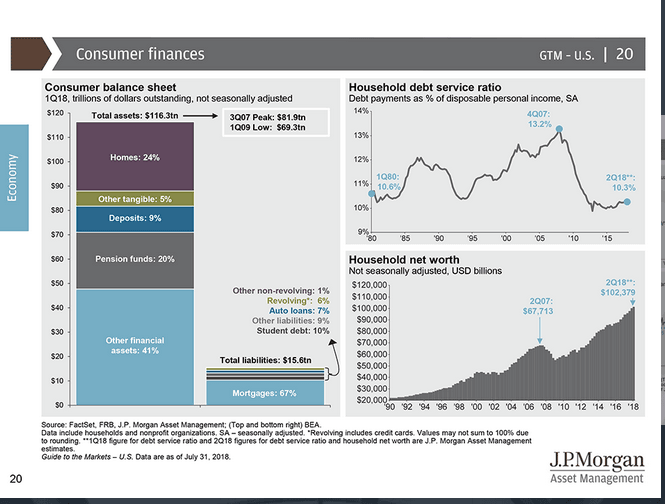 Please follow the link below to page 20.  Because consumer debt to income ratios are below prior economic troughs, as experienced in the early 1980’s and early 1990’s, and consumer wealth has grown 52% from 2007 (from $67 trillion to $102 trillion, largely driven by home equity), which both indicate the consumer is in great shape financially, I think that it is unlikely that we have a recession anytime soon.

We believe that long term interest rates are far too low.  Buyers of 10 year US Treasuries normally earn 2% more than inflation over very long periods of time (Ibbotson, 100 year data).  Today, the 10 year yield is roughly equal to inflation (2.9% for both, July CPI).  Investors in 30 year Treasuries normally earned 3% more than inflation, which would make the 30 year yield about 6%.  Thus, it appears to us that the investment community believes that a recession is coming, causing a major stock market correction, weak auto sales, housing starts, etc.  Because of this, cyclical stocks are selling at 5-10 times earnings while growth shares are selling at 25, 30, 40 or even 120 times expected earnings estimates, if they have earnings at all.  The only explanation for all of these yields and trading levels is that the market believes the end of the economic expansion is near (Fortune Magazine's cover story this month is "The End is Near").  Flows continue to leave equities and find their way into bonds at an extremely rapid pace.
These things don't usually precede major market corrections.  Elation for stocks (late 1990's) and housing (mid-2000's) caused the last two major market corrections.  I may be blind but I don't see a major bubble in lending conditions or in overall valuations, nor do we see massive flows into stocks indicating a "caution to the wind" sort of an environment.  In fact, we see huge outflows from equities, indicating significant fear.  If there is a bubble, we believe that it is in long term bonds, both governments (at home and around the world) and corporates.  Bonds, data show, is what everyone is buying.
Jamie Dimon of JP Morgan made a comment recently that this expansion has been so slow (2% annually or so) that the GDP has only risen 20% this expansion, far below the normal 40% the economy grows after a recession.  Thus, he believes that we are only half way there, so to speak.  For this reason, he believes the bond market is making a huge mistake and that 10 year yields should rise to 5%.  We agree with this sentiment.  If the 30 year Treasury yield rose to 6% tomorrow, investors in that bond would instantly lose 40% of their principal.  These are not riskless securities.  In addition, there are sectors that are interest rate sensitive, such as real estate, utilities, pipelines, and private equity, that may suffer significantly with higher yields.  Private equity, as an example, depends upon cheap financing to justify prices of 10-12 times EBITDA, the going rate for larger transactions, both when they buy and, later, try to sell.  Real estate also depends upon cheap financing costs to justify today's low cap rates.  Yield plays are expensive today, almost without exception.
Rising yields and continued economic growth should be excellent for our portfolio.  Our largest concentration continues to be in financial companies, the shares of which do well on days/weeks/months when long term interest rates rise and decline when rates fall.  Why?  Because the banks and insurers earn more money in a steeper yield curve environment.  In this sense, we have a very large upside if interest rates rise to the levels Jamie Dimon envisions.  Further, the auto shares should do well simply due to cash-on-cash returns approaching 20% at today's prices.  If we have 4-5 more years before a recession, the auto companies could, in essence, take themselves private with their internal cash generation.  The health care names we own, including Walgreens, CVS and McKesson, are largely depressed (9-10 times current earnings) due to Amazon's supposed entry into the industry.  Target's stock, however, is up 60% from its trading level on the day after Amazon purchased Whole Foods, a very similar situation to today.  And finally, Viacom, our fifth largest holding, is returning to growth, due to better movies from Paramount (A Quiet Place, Mission Impossible, and Top Gun II next summer) and better programming on its networks (MTV, Comedy Central, BET, CMT, Nickelodeon, International, Paramount, etc).  It is selling at 7 times net earnings, far below the 21 times that Disney is paying for Fox and the level AT&T paid for Time Warner.  Lots of money to be made here.
For these reasons, we would strongly recommend selling long term bonds and buying cheap stocks.  Over the next 3-5 years, cheap stocks, like the ones we own, should crush bonds and create significant wealth.
John