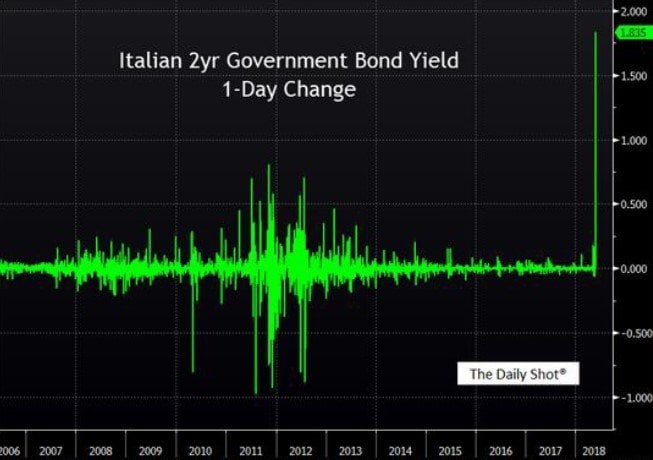 Absolute Return Partners letter for the month of July 2018.

There is a strong inclination in Europe to use the occasion to teach Italy a lesson. If the EU follows this line, it will dig its own grave. – George Soros

Italy is now run by a coalition consisting of the populist party Movimento 5 Stelle (M5S) and the far-right party Lega Nord – an interesting cocktail to say the least. The coalition has threatened to throw fiscal prudence to the wind and to embark on a spending spree that will drive debt-to-GDP much higher from already elevated levels. 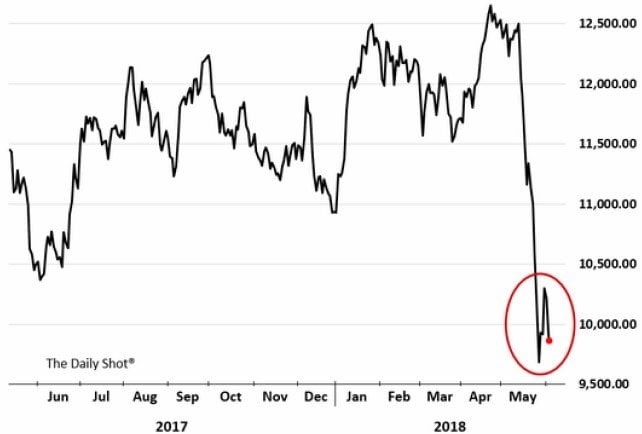 Lega Nord is the smaller party of the two in the Italian parliament but the senior partner in the new government. It is definitely perceived to be far-right in nature but, in reality, it is more multifaceted than that.

It is indeed correct that some of the policies in its manifesto can only be characterised as far-right. Having said that, its desire to extend the social safety network of Italian society can best be compared with the social-democratic model of Scandinavia, so there is more to the story than what first meets the eye. M5S, on the other hand, is relatively straightforward. It is truly a populist party.

The coalition’s top three objectives are to:

Should the new government succeed in implementing that programme, economic growth will almost certainly accelerate, and so will the public budget deficit.

That said, most people who follow Italian politics closely seem quite certain that the new government won’t last that long, but I note that those who are of this opinion are mostly part of the establishment, so no wonder they have their doubts.

If taxes are reduced as dramatically as the new government have indicated, and if the spending power amongst ordinary Italians suddenly start to rise again, you never know what will happen next.

A snapshot of Italy’s biggest problems

Italy suffers from some major structural issues that, even with the best of intensions, cannot be corrected anytime soon. In no particular order, I would consider the following issues to be the most important:

It is almost impossible to rank these problems from least to most important, so I won’t. Also, one could possibly argue that one or two of them are more cyclical than structural in nature; hence they can be dealt with through solid economic performance.

That is correct but only to a degree. Take Italy’s notoriously low growth in total factor productivity (TFP). If TFP has been slipping for almost 25 years, as it has in Italy (see more on this below), one can only conclude that there must be more than just cyclical factors at play here. 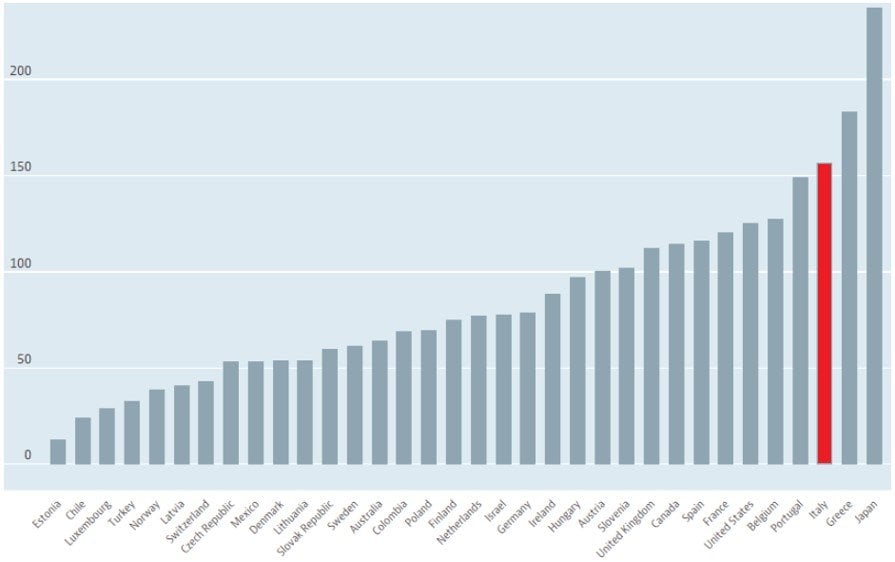 The EU’s Stability and Growth Pact is a set of rules designed to ensure that member countries pursue sound public finances. At 132% sovereign debt-to-GDP, Italy is already in breach of those rules (which limit government debt to 60% of GDP), and the policy programme presented by the incoming government recently could drive that number to 180% within 10 years, so the gloves have clearly come off.

On the other hand, if one looks at total debt-to-GDP (including all four economic sectors), in an international context, Italy is by no means an outlier, neither in absolute terms nor in terms of how much total debt has risen over the past decade (Exhibit 4). 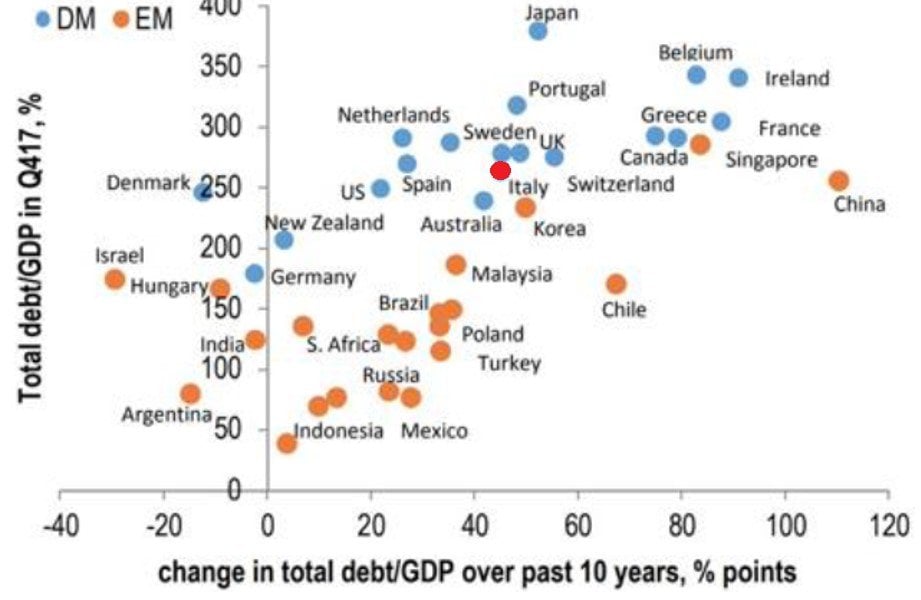 If sovereign debt-to-GDP is already 132%, and if the incoming government’s policy programme will drive that ratio to 180%, it is only fair to ask whether Italy can reasonably be expected to service all that debt?

Some 80% of all existing Italian sovereign debt outstanding are fixed rate securities, yielding on average about 2.5%, and about €300 billion of the bonds outstanding mature every year (Source: The ECB); i.e. the cost of servicing existing sovereign debt will rise by (at least) €2.4 billion (or 0.15% of GDP) for every 1% rise in interest rates.

That is certainly manageable; however, if one instead tunes in on all the new debt the incoming government seems prepared to take on, a more troublesome picture emerges.

That is a different kettle of fish. With Italy being a member of the Eurozone, the EU will most likely not tolerate that, and an open conflict between the two parties will most likely break out. The good news, I suppose, is that such a conflict will almost certainly break out well before Italy is in serious danger of defaulting.

One could therefore argue that the policy line being pursued by the new Italian government is only the opening chapter of years of drama, which could quite possibly end with a referendum on continued membership of the Eurozone (but probably not about continued EU membership, which is supported by a clear majority of Italians).

That I am not alone with those concerns is evident when you look at Exhibit 5. Why else would Italian sovereign credit default swap rates suddenly spike to levels not seen since the euro crisis some five years ago? On the other hand, leaving a currency union is a great deal more complicated than entering one, and my sources tell me that even if Italy want to leave, one shouldn’t assume that it is necessarily going to happen. 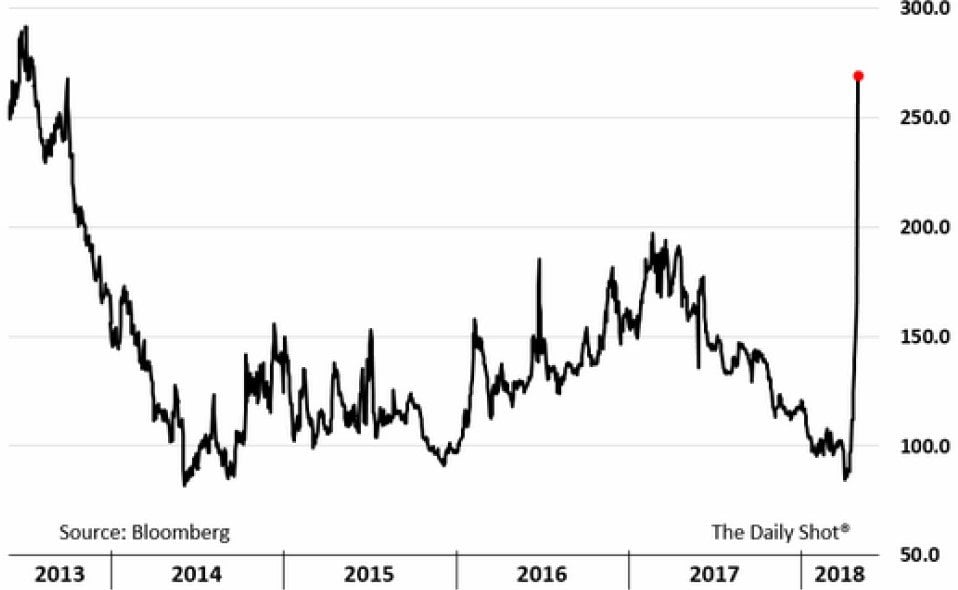 High public debt-to-GDP requires GDP to grow relatively fast. Otherwise the government may not generate enough income to service all that debt.

Admittedly, slow (or no) productivity growth is not only an Italian problem. TFP has declined in most countries since the Global Financial Crisis; however, in Italy, TFP started its journey south all the way back in the mid-1990s (Exhibit 6), so something more fundamental must be astray.

The best study I have come across on the topic is a study on Italian resource misallocation from 2016 called Italy’s Productivity Conundrum. The authors of that paper have found a strong link between capital and other resource misallocations and productivity. The more resources that are misallocated (Note: In economic terms, a capital allocation that doesn’t impact economic growth favourably, is deemed a misallocation of capital), the more productivity suffers. The authors conclude that misallocations within industries have been a far bigger problem for Italy than misallocations between industries; i.e. it matters less if capital that has been deployed in the textile industry in the past is transferred to the IT industry, whereas it matters a great deal more that capital is allocated to only the best textile companies. 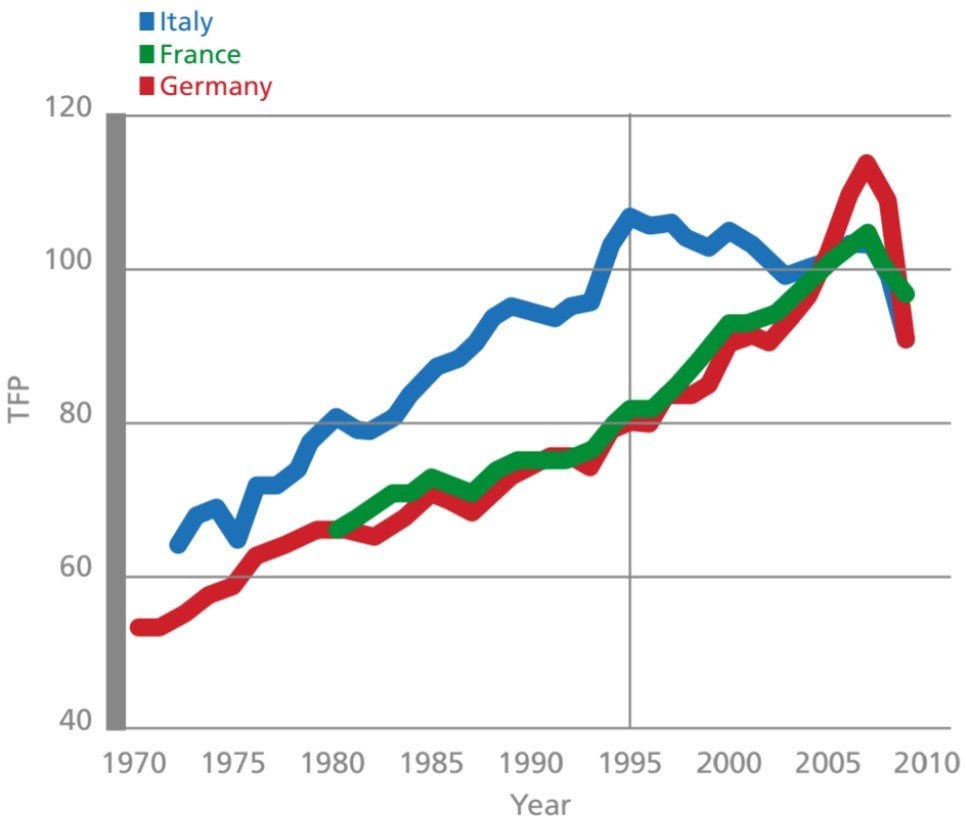 That brings me to the next issue on my list of problems Italy must deal with – the large Italian shadow economy. The word that first comes to mind in this context is the significant extent of corruption in Italy. Corruption leads to more capital being misallocated, even if the shadow economy functions rather well.

Having said that, a shadow economy is not only about corruption. Another factor to take into consideration is the significant loss of tax revenue, when the shadow economy is as big as it is in Italy. If the new government is serious about dramatically increasing public spending, one obvious solution could be to shrink the size of the shadow economy. In an international context, the shadow economy in Italy is one of the largest in the world, accounting for about 1/3 of GDP (Exhibit 7). 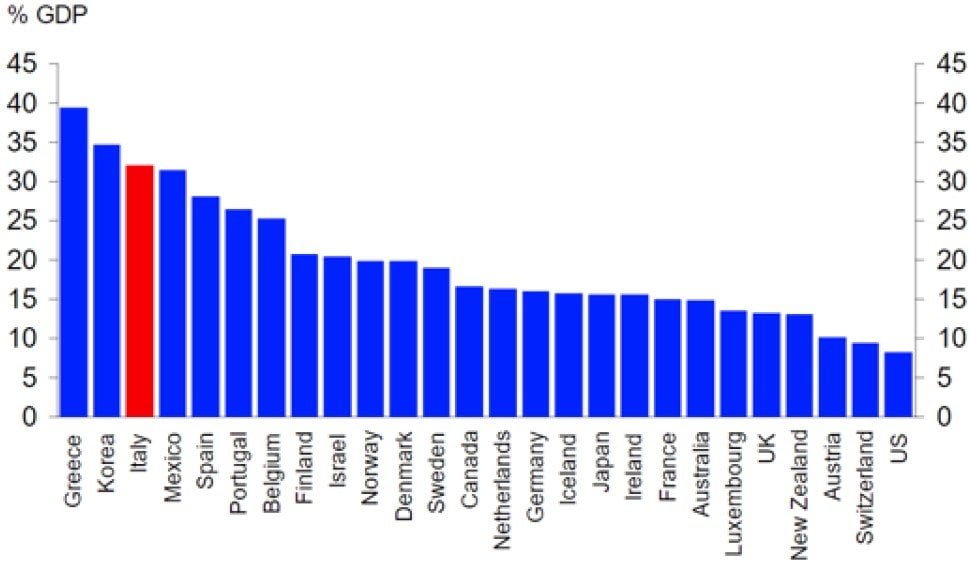 Exhibit 7: Size of the shadow economy (% of GDP)

The new government will have to make a choice, though, and that is to choose battleground. Would it prefer to fight the EU on its policy programme, or would it rather fight a domestic battle in order to reduce the size of the shadow economy?

Fighting on both fronts simultaneously is a risky strategy for the government. It will probably lose focus, which often leads to poor execution and, when that happens, both battles are most likely lost.

For society at large, an ageing population has (at least) two significant cost implications – rising pension costs and growing healthcare costs. Total pension expenditures in Italy today stand at about 16.5% of GDP and is, according to the IMF, expected to peak above 20% in 2040 (Source: http://bruegel.org/2018/04/italys-pension-spending-implications-of-an-ageing-population/).

As far as healthcare costs are concerned, the two main categories are long-term care (LTC) costs and acute healthcare costs. According to the OECD (Source:  http://www.oecd.org/els/health-systems/47884543.pdf), Italy spends about 1.7% of GDP on LTC today, and that is expected to rise to as much as 3.2% by 2050.

I cannot find any estimates on the expected rise in Italian acute healthcare costs but, if we assume that those costs will rise broadly in line with those that are expected in the UK (Exhibit 8), between pension expenditures and healthcare costs, by 2040, ageing of Italian society will ‘confiscate’ an additional 6-8% of GDP every year on top of what is already spent on the elderly.

When people retire, for another 10-15 years, they go about leading a lifestyle not too dissimilar to the one they pursued when they worked. However, that lifestyle typically changes when they move into their 80s. They consume less, they travel less, but one item suddenly takes off, and that is healthcare spending.

In the UK, a man in his mid-80s costs the NHS seven times more than a man in his late-30s (Exhibit 8), and there is no reason to believe that to be any different in Italy (Note: Regrettably, I don’t have similar numbers on Italy, but I wouldn’t expect the two countries to be vastly different).

Exhibit 8: Average health spending per person in the UK by age 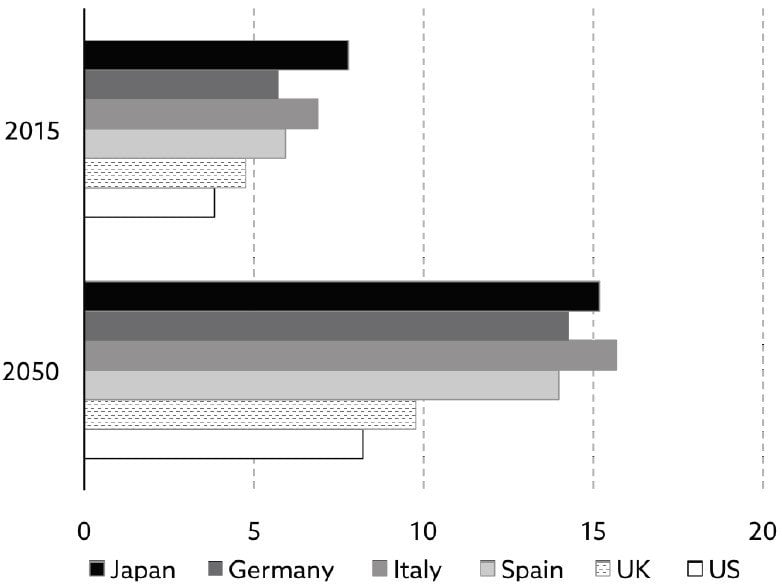 Exhibit 9: People aged 80 and over in selected countries (% of total)

In the years to come, the ageing of the Italian populace will be a huge strain on Italian public finances and, in my opinion, complying with the Stability and Growth Pact any time before 2050 is a pie in sky. An open confrontation with the EU at some point is therefore quite likely.

Italy is home to millions of migrants – most of them from North Africa and many of them illegal. In 2016, €1.7 billion was spent by the Italian government on receiving these people, of which only €46.8 million were reimbursed by the EU (Source: http://www.europarl.europa.eu/sides/getDoc.do?type=WQ&reference=E-2018-002227&format=XML&language=EN). On top of that, there is probably a massive (but undisclosed) amount of money going towards the ongoing care of all those people every year.

Italy’s problem is its proximity to North Africa. An estimated seven million people – some proper refugees and some economic migrants – live in tent camps along the coastline of North Africa, waiting for an opportunity to slip into Europe. Due to the proximity, Italy is – together with Greece – an obvious target destination for all those people.

Given falling water tables across North Africa, and given that one of the worst affected countries – Egypt – has in excess of 100 million people, many of whom don’t live that far from Italy, Italy’s migration crisis is likely to worsen.

The EU would do well to treat this as a pan-European problem rather than just an Italian/Greek problem. Unless the rest of Europe takes the problem under its wings, a far more serious conflict between Italy and the EU is on the cards.

Adding it all up

This Absolute Return Letter is already too long, so allow me to wrap it all up in bullet point format: