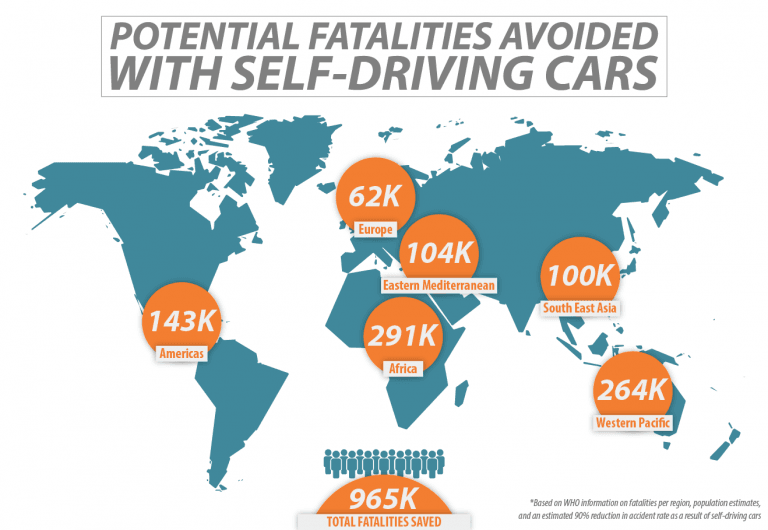 Self-driving automobiles will change our roads forever, but they are also dividing opinions.

If you’ve paid attention to the headlines recently you’ll have noticed many unsightly terms being flung about: attacking, crash, deadly, flaw, trouble, controversial, to name a few. This is not to say there aren’t positives in the mix (as there certainly are), but the negatives certainly stick with you.

Is this typical headline hyperbole at play, or is there something more suspect afoot? Does all this negativity really have some substance to it? Because digging into the statistics reveals something a little different...

Moneybarn, a car finance firm, has dived head first into the controversy surrounding self-driving automobiles and surfaced some rather interesting statistics regarding current public perception of autonomous vehicles, how they compare against driver accident fatality rates, the lives that could be saved per year following their ubiquity, how road style affects driver behaviour, and reported vs. true driver behaviourisms. All of which tackle the pertinent question – are autonomous vehicles truly safer than manned vehicles?

According to a report released by RAC, 48% of UK motorists are NOT looking forward to travelling in self-driving automobiles, compared to the 27% that believe they will lead to safer roads. A similar report released by AAA (American Automobile Association) revealed a similar attitude is prevailing in the US – with the majority of respondents (78%) claiming they are fearful of using self-driving automobiles.

However, a follow-up study found that while the majority of US motorists certainly seem uneasy of using autonomous vehicles, nearly 60% were also keen to have autonomous technologies in their car (electronic stability, self-deploying air bags, adaptive cruise control etc.), suggesting that consumers may, at the moment, be wary of relinquishing full control of their vehicle. Does this opinion stem from the fact that most people rate their driving skills and safety as above average? Perhaps this ‘illusory superiority’ is a common trait to all drivers, and makes us regard autonomous vehicles with an air of cynicism? But is this position warranted? Perhaps not. We looked at the most recent data available from Waymo, an autonomous car development company (formerly called Google’s Self Driving Program), where they report that their self-driving automobiles are over 28 times less likely to crash than the most at-risk human drivers, 16 to 17-year olds. However, some people are refuting this data, claiming that the results are unrepresentative due to the fact that Waymo haven’t deployed their vehicles in widespread locations, or different weather conditions.

In another report released by McKinsey & Company, they claim that if their vehicles were rolled out on a much wider (worldwide) basis, there would be a staggering 90% reduction in car accidents. If this claim is accurate, then that would save 965,000 lives per year. The map we put together is based on McKinsey’s estimate, population averages, and WHO (World Health Organisation) statistics on road traffic fatalities per region. However, one could argue that this data under-represents the skills of human drivers, and takes away their ability to act and react to road conditions. It appears that the public may have a problem with lending their vehicles complete control. But how much control do we have while driving, anyway? Is our behaviour always within our conscious control? Maybe not. You might be surprised to find out that road designers have been using a variety of subtle techniques to influence the way you drive for years. For example, a 2014 study by Bristol City Council found that when they removed the central dividing line on roads (which seems counter-intuitive at first), the speed of cars reduced by 9mph on a 30mph road, making the road safer. BBC Future has also reported that humanising street signs (including human figures) evokes a sense of empathy in drivers, triggering them to be more aware, and irregular/new road patterns (e.g. diagonal speed breakers) can jar drivers into driving more carefully. Studies have revealed that even small events such as Daylight Saving Time (DST) can serve to increase road accidents by up to 30%. Joseph Gannon, Chief Sleep Physiologist and Clinical Lead at The Sleep Disorders Clinic claims that the sudden change to sleep patterns can be detrimental to those already suffering from sleep disorders (e.g. Sleep apnea, Insomnia). And due to the disruption to our circadian rhythm (how your body regulates its 24-hour body clock), our melatonin levels will be higher in the evenings, leaving us feeling far more fatigued than usual. Could making self-driving automobiles the norm lessen the blow from seemingly innocuous events like this? Perhaps we’ve misjudged our susceptibility for human error.

Digging into the topic of misjudging even further, there are many more examples where drivers report to drive differently than how they actually drive. E.g. according to governmental travel survey reports (published by Gov.co.uk), 69% of motorists claim they are in favour of 20mph speed limits on residential roads, while in fact 81% of drivers exceeded this 20mph limit on residential roads in 2016.

The data above indicates that we will often report our ideal scenario, even if our true driving habits are slightly less impressive. Will autonomous vehicles be able to bridge the gap between reporting how we think we drive, vs. how we are actually driving?

It certainly seems there’s much we need to learn about self-driving automobiles and related technology. However, one of the factors that will need to be addressed is taking responsibility out of our own hands. Our research indicates that we are not as safe as we believe (and report) we are – is autonomous technology the answer?