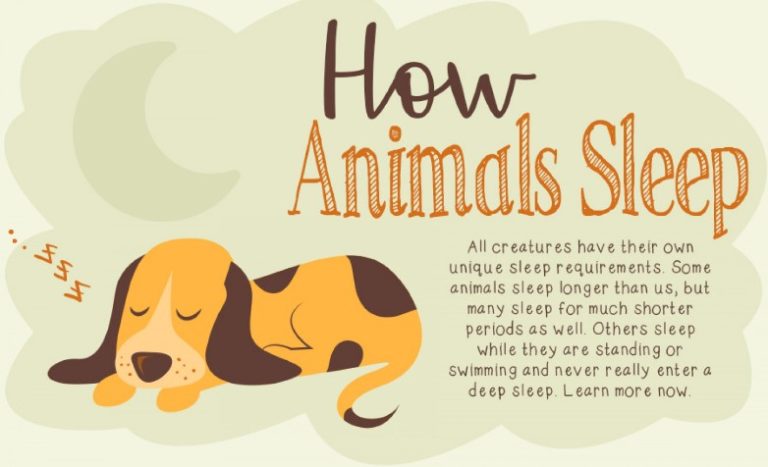 Google ‘sleeping tips’ and the first page of search results will yield a few common findings. We are generally advised to aim for 7-8 hours’ sleep each night and to refrain from eating, drinking or looking at screens immediately prior to getting our nightly does of shuteye so that we will be fully energized the next morning to tackle what the day throws at us.

Human sleeping patterns are well known, but what about our animal friends? Just as their dietary and behavioral habits differ from humans, so too does their sleep. Take prey animals like horses, zebras, elephants and giraffes, for example. It might seem hard to believe from a human perspective, but these creatures all sleep standing up. There’s a very good reason for that; it’s because they constantly need to be alert in case they are attacked by hunters. Giraffes are known to go weeks without sleeping and, even when they do doze off, their downtime might be no more than five minutes. It doesn’t exactly make you want to be a giraffe, does it?

The sleeping habits of creatures such as sea otters and cows seem far more comfortable. Animals like these usually sleep in groups so that they don’t become separated, while the typical duration of sleep exceeds the standard 7-8 hours of humans. Indeed, squirrels and sloths regularly sleep for almost 20 hours at a time. That certainly seems far preferable to the few minutes that a giraffe gets!

As you probably know, some warm-blooded animals will hibernate during winter. This is chiefly because the seasonal changes bring about a scarcity of food supply and hibernating provides animals with a continual source of warm energy that is vital to keep them going, as their body temperature drops significantly due to the cold conditions and the lack of physical movement. When an animal is in hibernation, it can go for days without waking to eat, drink or even relieve itself. Once its hibernation concludes, you might think it would be nicely relaxed and re-energized. However, the end of hibernation is often marked by clear signs of sleep deprivation, so hibernating is not the same as getting a typical night’s relaxed sleep.

Do animals dream? There is no conclusive evidence to provide an assured answer to this question, although researchers have devoted considerable time to attempting to uncover animals’ dreaming habits. Most dogs enter REM sleep within 20 minutes of dozing off and are thought to experience vivid dreams. Researchers believe that larger dogs have longer REM sleep and lengthier dreams while smaller pooches’ dreams tend to be quicker. As insects and fish don’t experienced REM sleep, it is believed that they do not go through the dream process.

The following infographic from Greyhounds As Pets attempts to uncover some of the facts and beliefs about animals’ sleeping habits, some of which seem scarcely believable compared to ours. It’s fascinating to see how other creatures live so differently to us and we’re sure that you’ll find the infographic quite intriguing!