Universal Basic Income is one of several ideas floating around for dealing with the income/opportunity gap. Since you seem to be interested, I’m passing to you a briefing paper that my research team prepared for me and that I tweaked based on my Q&A with them. I won’t give you my conclusions because I don’t want to bias you. I’d rather you form your own opinion after you are informed.

What is Universal Basic Income (UBI)? In general, UBI is a type of cash transfer that is:

UBI isn’t an especially new idea; even Thomas Paine was an advocate. [i] The idea gained traction and elicited debate in late 1960s (especially during the Nixon administration), but never really gained a foothold. [ii]

Where is UBI Receiving Policy Interest? Cities in Canada, Finland, the Netherlands, and the US have announced pilot schemes to test the effects of the policy (generally, these are in very early stages). Governments in Germany, France, New Zealand, India, Scotland and Namibia have also expressed interest. [iii] GiveDirectly (a charity that distributes cash to the poor) has launched a comprehensive study on unconditional cash transfers in Kenya. [iv] Most notably, Switzerland held a referendum on UBI in 2016, proposing each citizen receive a monthly income of about $2700. The proposal was defeated (77% of voters opposed it). [v]

What are the Chief Points of Contention?

Proponents argue that UBI will reduce inequality, direct money to where it is needed most because the person with the need is the best decision maker, avoid the bad incentives created by traditional welfare programs, distribute more money because the administrative overhead costs are less, encourage dynamism and risk taking in the economy, and offer an additional safety net for those who are seeing downward wage pressure from automation/globalization.

Critics claim that any meaningful basic income scheme will be prohibitively expensive, reduce incentives to work, redistribute money away from those who need it most to those who already have jobs, and/or redistribute it away from providing it where it is most needed (e.g. food stamps, social services) to bad or less good usage (e.g. “they will drink it away”) because of bad choices. (More Detail Below) [viii]

What Does the Evidence Suggest?

As UBI has never been implemented (unless you count the extremely generous payments Gulf States make to their citizens), we do not have a true case study to stress test the arguments for and against it. The pilot schemes that are/will be tried in Canada, the United States, Finland, Scotland, Kenya, and the Netherlands will take years to report their findings.

We do, however, have the results from numerous experiments looking at the impact of unconditional direct cash transfers to poor households (i.e. no-strings transfers to cover basic needs for a period, but that weren’t universal or long term), both in the developed and developing world. These include five experiments in the US and Canada conducted in the 1970s, as well as over 50 experiments in the developing world. [ix] Findings from these studies are regularly employed in debates on UBI.

These studies show an improvement in recipient economic conditions and wellbeing, a modest decrease in work effort, and a tendency for recipients to spend the transfers productively. [x] However, the usefulness of most of these studies is limited by the fact that the transfers ended after a short time period (2-3 years) and were only awarded to very poor households (not universal) – the studies were structured this way because they were more focused on testing unconditional cash transfers, rather than something closer to UBI. And the richest data comes from the developing world, so it is not clear how much can be extrapolated from the behavior of transfer recipients previously earning less than $1.5 a day with citizens living in more prosperous economies.

To further flesh out what the studies [xii] found:

What would UBI cost if implemented in the US?

Below we take a rough cut at estimating how much it would cost to implement UBI in the United States. We first look at what it would cost to pay every American citizen the current poverty threshold ($12,000 a year– an amount less than half what the Swiss proposed implementing in 2016). This would end up costing ~ $3.8 trillion (or 21% of GDP and 78% of all tax revenues and contributions for government social insurance).

We next look at how much of this expenditure could be funded through scrapping existing social programs and replacing them with a UBI (as some proponents argue). We first imagine the highly unlikely scenario in which all social spending (excluding infrastructure spending and education, but includes almost all other government transfers to households including healthcare) is scrapped. This would free up about ~ 92% of the funds needed to implement UBI. We subsequently imagine that only income support programs (disability, retirement & social security, welfare, and unemployment benefits) are axed. This would yield ~ 37% of the required funding. Finally, excluding social security, retirement and disability from the list of replaceable programs leaves only 11% of the costs for a UBI of $12,000 covered through replacing existing components of the welfare state.

Finally, we imagine two scenarios in which the payouts of UBI are reduced depending on the income level of the receipt. For instance, in the first scenario, every $ of income earned will reduce UBI by 10 cents, meaning that if you make $120,000 you will not receive a basic income, and if you make $60,000 you will receive only half (i.e. $6000). While this is technically not a Universal Basic Income, it may offer a compromise solution between securing the underlying goals of UBI and the constraints/concerns surrounding financing it. As you can see below, this reduces the cost of implementing UBI significantly. However, even using a steep slope, existing income support programs will fall short of fully financing UBI - and additional revenues will likely need to be raised.

As perspective, the chart below shows OECD estimates for how much money would be made available per person if developed economies replaced all social spending ex-health care with a Universal Basic Income (purchasing power adjusted). Even the most generous welfare states would struggle to cover the cost of a poverty-line basic income. Not to say it isn’t possible – just that incremental change in our social/taxation systems wouldn’t get you there.

More Details on the Pros and Cons for UBI

Other than to provide every citizen in an economy with an income to meet basic needs, and a buffer against sharp personal financial downturns, supporters argue that UBI will help in:

Aside from philosophical arguments opposing redistribution or contesting any inherent right to a fixed income, opponents argue that UBI will hurt in:

The chart below shows the effective after tax and transfer income of Americans earning up to 70k. There are several ‘cliffs’: points at which earning a bit more actually hurts you because you lose eligibility for a social program. [iv] 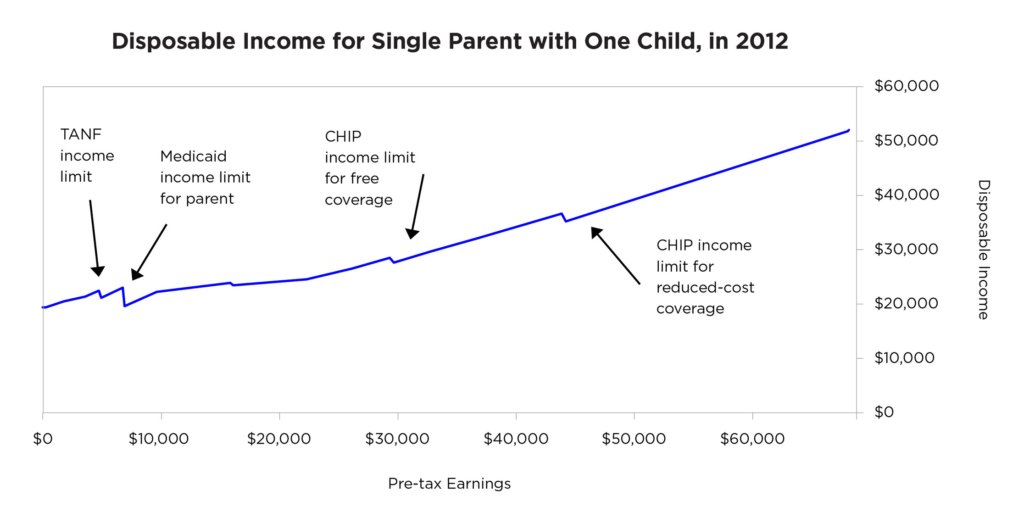 Economist - Sighing for paradise to come

FiveThirtyEight - What Would Happen If We Just Gave People Money?

The Journal of Socio-Economics - A failure to communicate: what (if anything) can we learn from the negative income tax experiments?