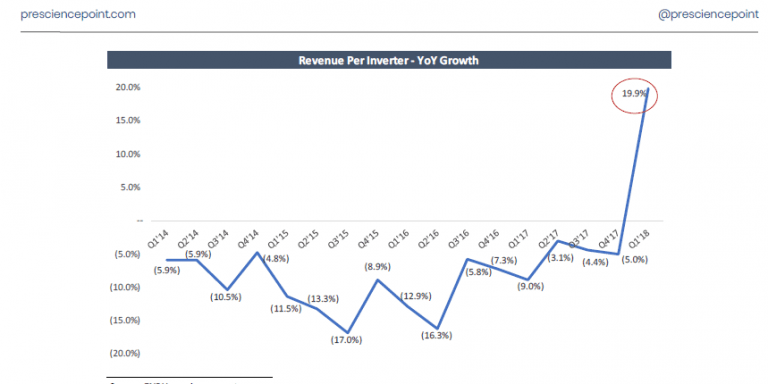 • ENPH shares are conservatively worth $1.01 per share, implying 84.7% downside • ENPH’s turnaround under its new CEO Badri Kothandaraman is a sham • The 43.7% or 804 bps expansion in ENPH’s gross margin from 18.4% in Q2’17 to 26.5% in Q1’18 was almost entirely attributable to manipulative and potentially fraudulent accounting practices • ENPH is far more levered than reported and only has a cash runway of ~8 months. A dilutive equity raise will be necessary. • ENPH’s auditor, its audit committee, and the SEC should launch a full investigation into the company’s accounting practices

Research Highlights: • ENPH’s massive gross margin expansion from Q2’17 to Q1’18 defies logic. It occurred in the absence of any apparent catalysts (e.g. a game-changing new product, restructuring of manufacturing operations, etc.) and during a time period when its quarterly inverter volume declined by 21.2% (i.e. lower fixed cost absorption) • ENPH’s Q3’17, Q4’17 and Q1’18 gross margin was inflated by an estimated 11.5% (224 bps), 16.1% (336 bps), and 40.7% (765 bps), respectively, from accounting shenanigans initiated during Mr. Kothandaraman’s tenure as CEO, based on our analysis • An anomalous 19.9% YoY increase in Q1’18 revenue per inverter amounts to proof, in our view, that ENPH’s Q1’18 results were significantly overstated. This massive increase is far out of line with the decline in revenue per inverter reported in each of the 16 quarters prior, and does not reconcile with management’s projection of a 2% ASP decline per quarter in FY’18 • Large, irreconcilable discrepancies in ENPH’s disclosures and financial statements indicate that it egregiously violated GAAP by improperly recognizing $6.3m of deferred revenue in Q1’18 at, or close to, a 100% margin • In Q4’17, ENPH significantly accelerated the amortization of its deferred revenue by making a questionable decision to reduce the estimated service period of its Envoy monitoring system • In Q3’17, ENPH’s warranty expenses amounted to just $0.2m or 0.3% of sales, almost 90% lower than its historical average • Since FY 2014, ENPH has used a questionable discounted method of warranty accounting, using an egregiously high discount rate of 16%-17%, which we estimate has artificially depressed its ongoing warranty expenses by an avg. of 63.0% since adoption. ENPH is the only public company we are aware of which uses discounted warranty accounting • Due to discounted accounting, ENPH has under-accrued an estimated total of $57.1m of warranty liabilities since FY’14 • (Former) CFO Bert Garcia was unable to provide credible explanations for the severe red flags we uncovered in ENPH’s financial reports. He suddenly left the company in June. New CFO Eric Branderiz is ENPH’s fourth CFO in 6 years • Investor optimism over the SPWR deal is misplaced. Our analysis indicates that ENPH paid 34.4x annual EBIT for a limited five-year supply agreement – an incredibly value destructive transaction. We believe ENPH engaged in this questionable deal to artificially boost its future gross margins • After a 496.4% increase in ENPH’s share price since his promotion, the value of Mr. Kothandaraman’s generous options package has grown to ~$10.8m (See Appendix for calculation) • Wall St estimates are severely inflated as their EPS targets are derived in large part from ENPH’s reported gross margin and guidance

Valuation
Since Mr. Kothandaraman took over as CEO on 9/6/2017, ENPH’s share price has increased exponentially by 496.4% from $1.11 to $6.62, and its market capitalization has exploded to near all-time highs from $106.2m to $778.0m.
But we believe that the recent increase in ENPH’s share price has been wholly unwarranted given,
• Our research which indicates that the large expansion in the company’s reported gross margin over the past three quarters was almost entirely attributable to accounting shenanigans
• The value destructive SPWR deal
• ENPH’s use of discounted warranty accounting which has further inflated its gross margin and artificially depressed its warranty liabilities by a material amount
• The heightened risk of further market share losses due to the recent entrance of Huawei and other well-capitalized competitors into the MLPE space
• The heightened risk of a liquidity crisis or dilutive equity raise within the next 8 months due to the company’s significant near-term cash needs and weak cash position
Meanwhile, Wall St analysts are missing the forest for the trees, deriving their lofty EPS estimates and, in turn, their lofty price targets from ENPH’s inflated reported gross margin and guidance. At the moment, the consensus analyst price target for ENPH shares is $7.46 (Source: Yahoo Finance, 7/24/2018).
We believe that ENPH shares should revert back to a valuation which is more in line with where they traded prior to Mr. Kothandaraman’s promotion. At the moment, ENPH is not profitable on either an EBITDA or EPS basis (based on our estimate of ENPH’s ‘actual’ results). Thus, we resort to a multiple of revenue to value ENPH.
Currently, ENPH is trading at an LTM revenue multiple of 2.7x. By contrast, as of 9/5/2017 (the day before Mr. Kothandaraman’s promotion), ENPH was trading at an LTM revenue multiple 0.4x:

See the full report below