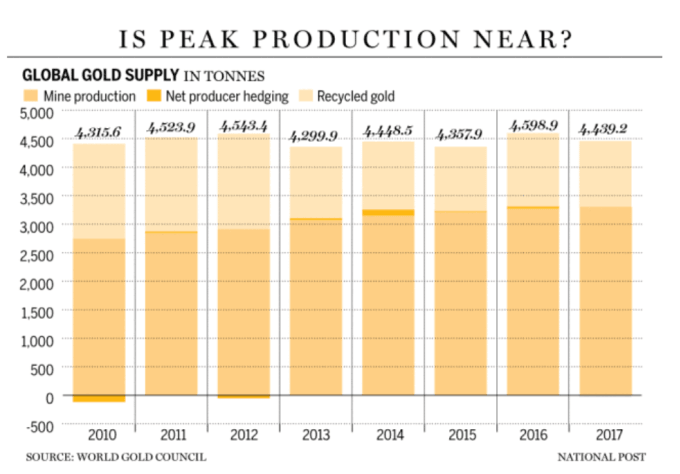 It’s the most frustrating thing to watch as the price of gold drifts sideways – I grind my teeth often over it.

I know what’s causing it too – at least I think I do – and that’s the worst thing about it. The recent soaring dollar and the temporarily tightening central banks worldwide aren’t great for gold.

But – after a couple of minutes of cursing the world – my rational and logical side kicks in. And I soon realize that the lower gold prices allow me to average down and find undervalued stocks.

Most investors don’t realize a couple of things that are very important to them and their strategies. . .

First – just because the crowd isn’t investing in something today does not mean that they won’t rush in tomorrow.

Before every bull market, there was a bear market. For prices to climb higher, they must already be down.

Remember Bitcoin? Out of seemingly nowhere it became the biggest mania we’ve seen in years. And the important part is – no one can explain why it suddenly took off. It’s not like anything changed with the actual Bitcoin’s themselves – just people’s perceptions towards it.

Then once there are higher prices comes even higher prices. We call this ‘The Greater Fool Theory’ – when investors pay for something knowing someone else will pay more for it.

To summarize this all together – just because gold hasn’t rallied yet today doesn’t mean tomorrow it won’t. And when it does – it can go even higher than many think is possible.

Second – most investors, especially Wall Street, are short-sighted and only invest for the immediate future. Not the long-term.

Warren Buffet’s pointed out this situation and why it ultimately gives retail investors such a leg up. When everyone’s looking at the short run, the intelligent investors can cherry pick the long-term and find deep value.

I worked as an equity analyst before – and I’ll tell you from first hand experience that this is true.

For instance, when your job depends on you to make money – which is what Wall Street’s all about – you can’t tell investors to wait six months – or even a year. Because if you don’t make money right out of the gate – investors will pull their capital out and put it in a place where they are generating profits now.

This forces traders and analysts to focus on what’s going up today – even if the risks of losing money are much higher. . .

There were many times I saw positions that would return several fold my initial investment – but they needed time to mature. And I would be long gone – fired – before I could collect the huge harvest.

These two reasons are why I urge retail investors to take advantage of these situations – and look at them as opportunities. . .

So don’t worry about gold today – because the next year or two will prove exactly why all that teeth grinding was worth it.

There are a couple of reasons why gold looks so good going forward – regardless of the potential weak short-term. . .

I can sit here and tell you why the demand for gold will soar – but I’d rather focus on the supply side. Since this is how the best bull markets have formed historically.

Goldcorp’s Chairman – Ian Telfer – has said the world has now reached this ‘peak gold’ era. This means that global mine production will keep declining because all major gold deposits have already been discovered.

Telfer says that at $1,300 gold or lower – it’s all been found. There are no more significant potential mines out there at these prices. And the exploration records show just that.

Many forget that mining companies are self-cannibalizing industries. Each ounce that’s pulled out of the ground today is one less ounce for tomorrow. Therefore, they must always be looking for new sources of gold.

Telfer goes on to say how all the major mining companies – Barrick Gold, Newmont, Goldcorp – are all “shrinking fast”. 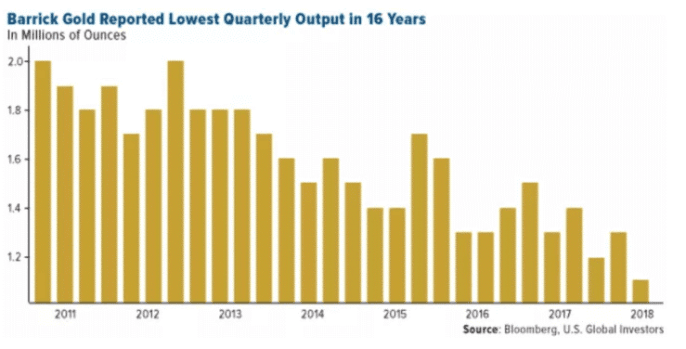 This is a very important signal that gold production worldwide is going to start declining.

Because when the peak’s reached – the only way to go is down. . .

We need to ask ourselves: is it just one gold mining chairman’s opinion, or is this ‘peak gold’ an industry worry?

Here are some other big names sounding the alarm. . .

Pierre Lassonde – the billionaire founder of Franco-Nevada Gold – also believes the same. That ‘peak gold’ is here and current mine supplies are at risk.

Kevin Dushnisky – President of Barrick Gold – has said that “falling grades and production levels, [as well as] a lack on new discoveries” are what’s going to drive the next gold bull market. 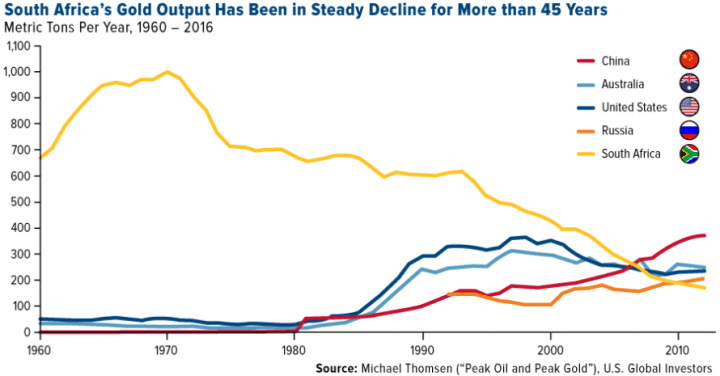 As many know – I’m a firm believer of the Austrian economist – Joseph Schumpeter – ‘creative destruction’ theory. And that the last few years of sub-$1,300 gold has wrecked the sector.

Many of the old mining companies that couldn’t survive have bankrupted – they’re gone. . .

And all the remaining gold companies over-produced just to make up for the lost revenues caused from a falling gold price. I call this the ‘running on a hamster wheel’ problem – they depleted their finite resources, and burned through their cash, only to simply sustain without really going anywhere.

The thing is, analysts know this about the gold market. It’s not some hidden secret. They know prices will rise – eventually. But like I said in the beginning – they would rather start buying after prices have risen than before. Because their careers depend on it.

This gives us an advantage to find the best, high quality assets that will have their valuations soar once the price of gold climbs higher.

The investment thesis is really simple: as gold production and supplies continue declining – the gold price will do very well in the long-term.

We now know because of this ‘peak gold’ situation that the $1,300/oz price level is the floor. And that overtime the price of gold will trend higher.

As I wrote earlier – we’re in the early stages of a supply driven bull market. And these are the kinds of bull markets that get me most excited.