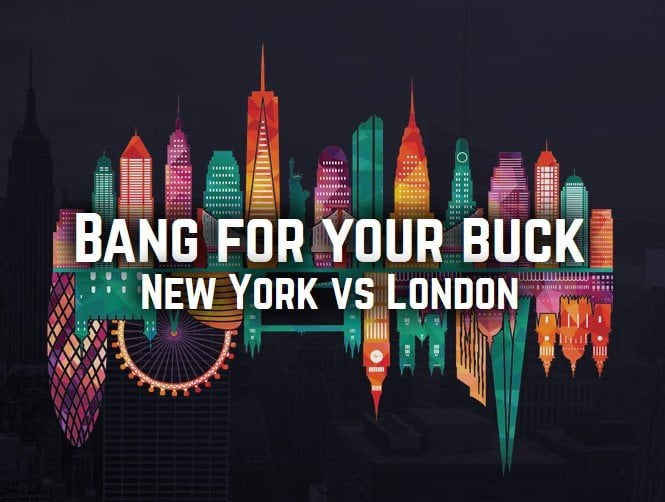 As two of the most popular capital cities in the Western World, both New York and London are iconic destinations with a combined total of 102.7m tourists per year. But, which city can claim the crown as the number one destination? The truth is there’s no clear cut winner between New York and London as it depends on what you look for in a location. While New York has more restaurants, bars and Michelin stars, London refuses to live up to its nickname “The Big Smoke” with more sunshine and green spaces as well as a higher life expectancy.

To truly discover the winner, New York Pass has crunched almost 100 different datasets and criteria to discover how each city truly shines, New York emerges victorious for food and drink and everyday costs.

An interactive guide that compares New York and London for tourists, by compiling almost 100 pieces of information, puts The Big Apple ahead when it comes to costs - as well as being better for food and drink.

Whilst both cities stack up strongly against each other, New York triumphs on having more than twice as many restaurants, higher-rated premium restaurants, better street food, more bars and more Michelin stars collectively.

The guide also lists some of the key sites for the categories on a map of each city, recommending them to would-be travellers.

Using data from sources such as the UK Office for National Statistics, the World Cities Culture Forum, the US Census Bureau and World Weather and Climate Information, some of the guide’s specific comparisons of The Big Apple to The Big Smoke include:

New York beats London on almost every measure in the food and drink category, and on four of the six comparisons in the costs category. With cheaper cinema tickets, fast food, ice cream and clothing such as a pair of Levi’s jeans, its reputation as a world tourism hotspot is evident.

However, London scores higher for its greater choice of hotels, more green space and more museums.