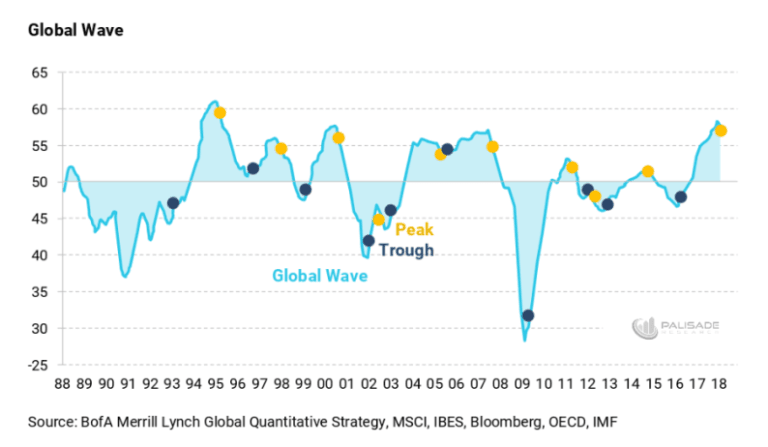 Understanding cycle theory is still one of the most important things an investor can do.

Buying at the peak is a surefire way to increase your downside risk – even if your investment is sound. And buying at the bottom gives you a thick margin of safety – downside protection.

That’s why the best investors pay so much attention to where they are in the cycle.

The value-investing contrarian who runs Oak Tree Capital – Howard Marks – has written about the importance of cycles.

In fact – in his book, The Most Important Thing Illuminated, he writes two key rules. . .

“Rule number one: most things will prove to be cyclical… Rule number two: some of the greatest opportunities for gains and loss come when other people forget rule number one…”

And going back the last 30 years – within a year of when things peak (top), there’s either a recession or some market crisis. And when there’s a trough(bottom), it’s followed by growth and gains.

Today – the Global Wave indicator’s signaling economic growth has peaked for this cycle. And both markets and economies are going to underperform for at least the next 12 months.

To be fair – some post-market peak downturns were brief and didn’t result in huge market sell offs. But the ones that did – like the 2001 and 2009 recessions – were brutal.

That’s why we need to ask ourselves a very important question: what’s most likely to happen over the next 12 months – is the Global Wave Indicator just noise(useless) or is it a signal(useful)?

If we look at the history of the GW, it’s not hard to see that things are most likely going to go down from here. . .

Not to mention there’s the problem of. . .

With all these things creating a fragile outlook – the market peaking here isn’t a good sign. So, with the GW set to fall from here – what can investors expect?

Historically – what follows is a period of laughable returns from equity markets.

The best-case scenario? Markets trade sideways for the next 6-12 months.

But, if things are like the 2000-2001 recession – and especially like the 2007-2009 financial crisis – then what follows is potentially fatal to investor’s portfolios. 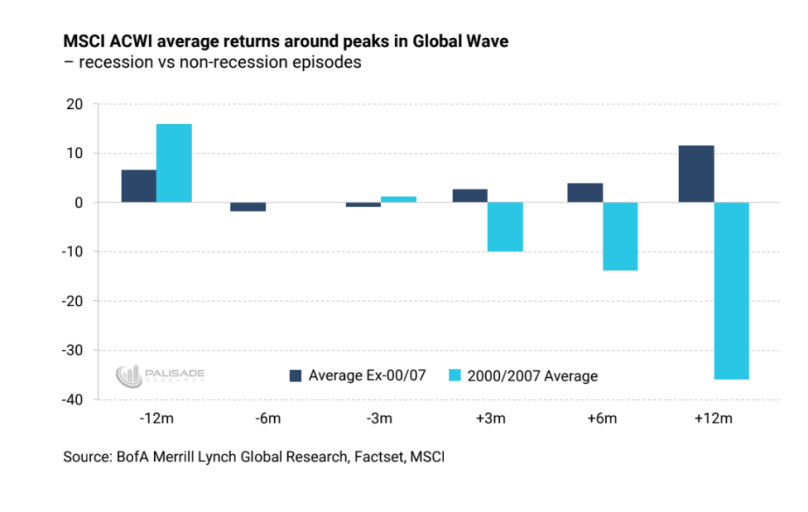 But putting this in context – in the first decade of the new millennia, there were already two major worldwide market crashes and recessions. One which– the 2008 Great Depression– changed markets as we know it. And cost governments worldwide trillions in new debt and caused central banks to print trillions more – simply just to prop things up.

All it takes is one of these kind-of-events to crush ‘buy and hold’ investors. Remember, if your portfolio drops 50%, it must go up 100% just to get back at break even. . .

The Austrian economist and ‘black swan hunting’ fund manager of Universa – Mark Spitzngael – has written about what destroys portfolio performance over the long-term.

It’s these sudden market crashes – like 2001 and 2008 – that kill long-term compounded annual growth. He calls this problem the ‘Volatility Tax’ and it’s something investors need to worry about.

But don’t expect to see anything relating to it from CNBC or the mainstream. . .

I doubt that the Fed – and other central banks – will continue tightening into declining growth and falling markets. And volatility will return with a vengeance as the herd of investors try to re-analyze just exactly what the hell is going on.

Market’s have already traded sideways since February when the ‘volocaust’ occurred – the XIV blowing up overnight.

Therefore, the peak looks like it’s already started a few months ago – that means over the next six months things can start to get real ugly.

With so many external problems building up – from Fed tightening to trade wars – the coming months have limited upside with significant downside – or otherwise said, things are negatively asymmetric (high risk – low reward).

I mean, when the best-case scenario is stagnant growth and mediocre returns – that’s enough to get really worried about. . .