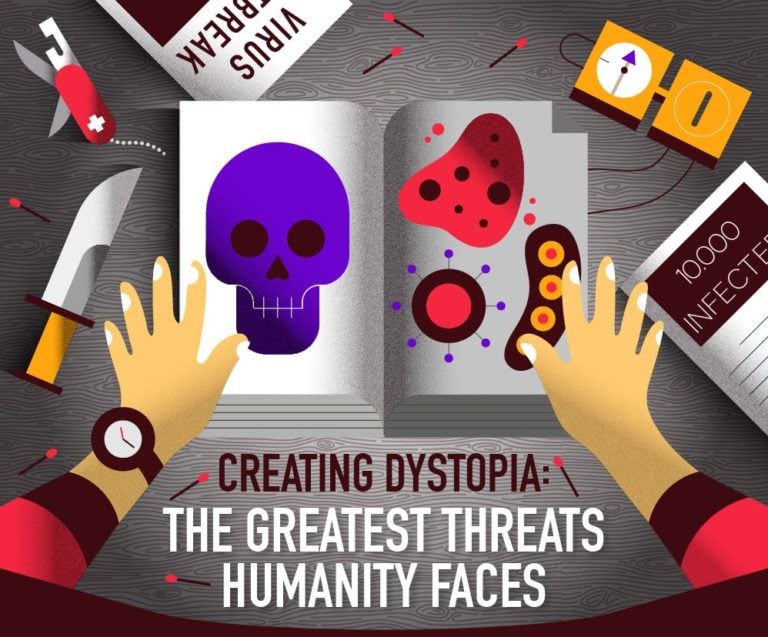 A new strain of flu could crop up at any time and decimate the global population. Climate change could make our planet unlivable. Robots of our design rise up and turn against us. While these ideas may seem far-fetched, considering humanity’s potential end will help us prevent it, or at least be prepared.

Every year 2 million people in the United States are infected by antibiotic resistant bacteria. Up to two-thirds of the antibiotics prescribed in ICUs aren’t really needed, and widespread overprescription contributes to evolution of bacteria that are drug-resistant.

In 2016, tuberculosis killed 1.7 million people worldwide, a little less than 10% of those infected. But multidrug-resistant tuberculosis (MDR-TB) is far more deadly than strains that respond to treatment. There were less than a half million cases of MDR-TB in 2016, were these strain to become more widespread, the effects could be devastating.

CO2 levels are higher than ever, adding to the buildup of greenhouse gases that traps heat in Earth’s atmosphere, causing climate change. As the climate grows more extreme, rapid shifts in the environment could increase the virulence of disease. Meanwhile changing social structures in the wake of natural disasters may make it easier to for infections to spread.

As the plant heats up, the arctic sea is melting, causing increasing rates of sea level change. For every inch of sea level rise, we lose 8 feet of shoreline. As sea levels rise and tropical storms become more devastating, climate refugees will be force to relocate and population strain will contribute to a lack of food and other resources.

Industrial workers have long worried that robots would take their jobs, but today the sudden growth of artificial intelligence puts more than manual labor at risk of automation. Chatbots handle customer service calls, AI plans cancer treatment and writes newspaper articles. By 2033, up to 375 million jobs could be automated.

Widespread automation will do more than take our jobs. With less work to go around, it’s likely that inequality will grow with a the gap between the employed and the out-of-work. Coupled with fewer resources to go around, there’s potential for massive economic disparity.

Whether we reach our end in the next pandemic flu or are lost to automated weapons of our own design, humanity's future could be bleak. To learn more about humanity’s ominous future, check out this infographic: