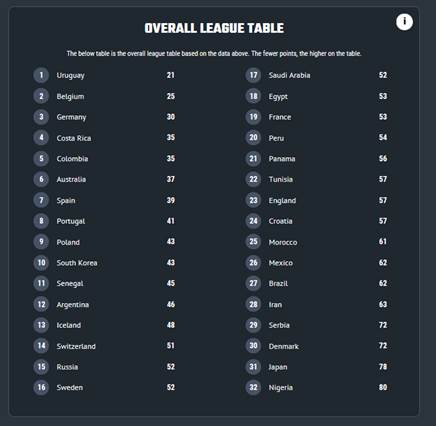 Belgium could be the squad to shake things up in Russia this year after being ranked as the most improved international team in the semi-finals.

Sport betting brand Spin Palace Sports crunched the numbers to find the teams who could change the status quo this summer, analysing 20 years-worth of data to create an interactive league table including all of this year’s participating countries.

Southpoint Capital Returns 28.6% In 2020 Thanks To Recovery Bets Like Uber [Exclusive]

Long/short equity fund Southpoint Capital returned 14.7% in the fourth quarter of 2020, and 28.6% for 2020 as a whole, that's according to a copy of the firm's annual letter to investors, which ValueWalk has been able to review. Q4 2020 hedge fund letters, conferences and more This return compared to a 12.1% gain in Read More

Rising stars Belgium came a close second overall on the league table behind Uruguay, who were knocked out in the quarter finals, with the number of matches played in global tournaments increasing over that last 20 years, along with a dramatic uptick in match wins. When it came to transfer value, Belgium has invested heavily in talent since 1998, with a 2,137% increase in value – the second highest among this year’s participants, next to Senegal who racked up a cool 3,250% increase.

The lowest ranked teams were the ones who had either fallen from grace or have never performed in a global tournament, with Nigeria, Japan and Serbia taking the bottom three places.

Liam Tillett from Spin Palace Sports said: “Everyone knows who the favourites are for Russia this year, which is why we decided to look at things a little differently. We asked ourselves, which teams could come from nowhere to steal the trophy? Rather than merely speculate, we crunched the numbers to find the teams who have seen the most improvement over the past 20 years.

“We assigned points to each team based on a number of different metrics to give us an overall view of who could be on the rise this year. This gave us a table that showed the biggest improvers, rather than anyone who has performed consistently well or poorly. Two-time world cup winners Uruguay came out on top, a country that, per capita has recently been hailed as the most successful footballing nation in the world.

“Belgium has risen to third place in the FIFA rankings, showing just how much of a powerhouse the country has become in football. Since 1998 they have played and won more matches, investing in talent and fostering players’ abilities incredibly effectively. We’re excited to see how much of an impact this could have in Russia.”

10 most improved teams (most to least)

10 least improved teams (most to least) 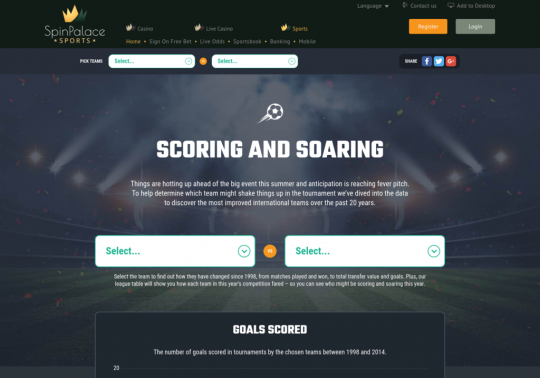