Hedge fund conferences are some of the most anticipated events in the financial world, where the best minds of investing gather to share their best ideas.

However, according to a recent study, the funds touting these ideas might have an ulterior motive. According to a new report titled, Talking Your Book: Evidence from Stock Pitches at Investment Conferences, on average, a hedge fund manager that pitches a stock at a conference cuts its weighting in his portfolio within the first quarter after praising it.

Harvard doctoral student Patrick Luo compiled data from 30 investment conferences from 2008 to 2013, building a sample of 350 long and 40 short stock pitches. The data show that while stocks do outperform in the days immediately after they’re mentioned at conferences, the best performance comes in the weeks prior. The paper estimates investors can earn 1% in the first two days after the pitch, but that’s about it.

“The majority of the outperformance occurs before the pitches,” Luo wrote in the paper. “Outperformance after the pitches are likely driven by inflows from other investors that follow these investment conferences.”

One of the qualities we look for when finding managers for Hidden Value Stocks is that they own the companies profiled, and are not just using the publicity to offload into a rising market. We also try to publish regular updates from previously profiled funds and positions as part of our goal to offer the most transparent stock newsletter service, and unlike many other newsletters, we publish stock returns (a full list can be found at www.hiddenvaluestocks.com/returns) .

This issue contains three fund interviews and seven stock ideas in total. We hope you enjoy the summer issue of Hidden Value Stocks and as always, if you have any questions or comments please do get in touch.

Update from Dane on Daseke (profiled in the September 2017 issue of Hidden Value Stocks):

From Dane’s Q1 letter to investors:

“...on Monday morning, February 12th, the company announced a follow-on offering of 7.4mn shares with proceeds to the company — the stock had closed at $12.98 the previous Friday. In our view, the transaction was completely botched. In our experience, banks typically prescreen a deal with buysiders, or, at a minimum have an accurate sense of supply/demand dynamics. The transaction priced the night of Wednesday the 14th at a deal price of $10.60 – a shocking 20% haircut from deal announcement. Perhaps the company had a transaction teed up which fell through, but clearly this has resulted in a crisis of confidence. The stock soon broke deal price and ended the quarter at $9.79. This represented a quarterly 31.5% decline in the price of shares, and a 43.6% decline in warrants, which our Fund also holds.

All of this has happened against a back-drop of a flat-bed rate environment that is red-hot. According to dat.com, on April 24th “flatbed load-to-truck-ratio has exceeded 100 loads per trucl for four weeks in a row.” Last week the site said flatbed load-to-truck was at record levels. Daseke is down another 13% this month and now trades at a paltry 6x EV/EBITDA. Fortunately, it can still make acquisitions at even lower multiples (although we’d be equally comfortable with them buying back their own shares). We expect the stock price to improve when the company reports what should be good numbers in the next few weeks, and we’ve encouraged management to authorize a stock repurchase plan.”

Update from Stanphyl Capital on Echelon (profiled in the March 2016 issue of Hidden Value Stocks):

From Stanphyl’s Q1 letter to investors:

“We continue to own Echelon Corp. (ELON), a perpetually disappointing “industrial internet of things” networking company with approximately $30 million of annual 56% gross margin revenue and an enterprise value of approximately $2 million. In May Echelon reported yet another disappointing quarter, with Q1 2018 revenue of $7.8 million vs. Q4’s $8.0 million and guided to a worse Q2, with revenue of about $7.5 million; meanwhile operating cash burn disappointingly continues at around $1 million per quarter. Echelon is now focusing its growth on “smart” commercial & municipal LED lighting (although its fab-less chip business has apparently now stabilized after a long decline), and if the lighting business accelerates (and so far it hasn’t!), I think there’s a chance it can hit a break-even annualized revenue runrate of $40 million by Q1 2020 (pushed back again from my earlier hoped-for timelines) at which point— assuming $12 million of remaining net cash (vs. an estimated $18 million at the end of Q2 2018) and 4.8 million shares outstanding (vs 4.54 million today), an enterprise value of 1x revenue on this 56% gross margin company would put the stock at just under $11/share. Additionally, Echelon has approximately $263 million in federal NOLs and $108 million in state NOLs, worth tens of millions of dollars if it can utilize them. So if it can pull this off (and theoretically, the market for the networking of commercial and municipal LED lighting should be huge between the U.S. and Europe), this stock could be a home run for us. So far though (as noted above) there seems to be little sign of improvement, and although the stock is now near all-time lows I won’t add to the position unless the current CEO (who has had more than enough time to fix things) is replaced.”

Update from Logos LP on Luxoft (profiled in the September 2017 issue of Hidden Value Stocks) :

From a recent Logos investor update:

The stigma that surrounds failure in asset management needs to be revisited as even juggernauts such a Buffett and Druckenmiller make big mistakes. As always, the way to avoid future failure is to embrace and learn from past failures. This piece hit home as during the month of May we exited our position in Luxoft and realized we had made a mistake. We were reminded of a few things: 1) turnarounds can take much longer than anticipated no matter how bullish one can be about the business’s prospects 2) more time means a larger opportunity cost 3) sometimes being too early is the equivalent to being wrong. LOGOS 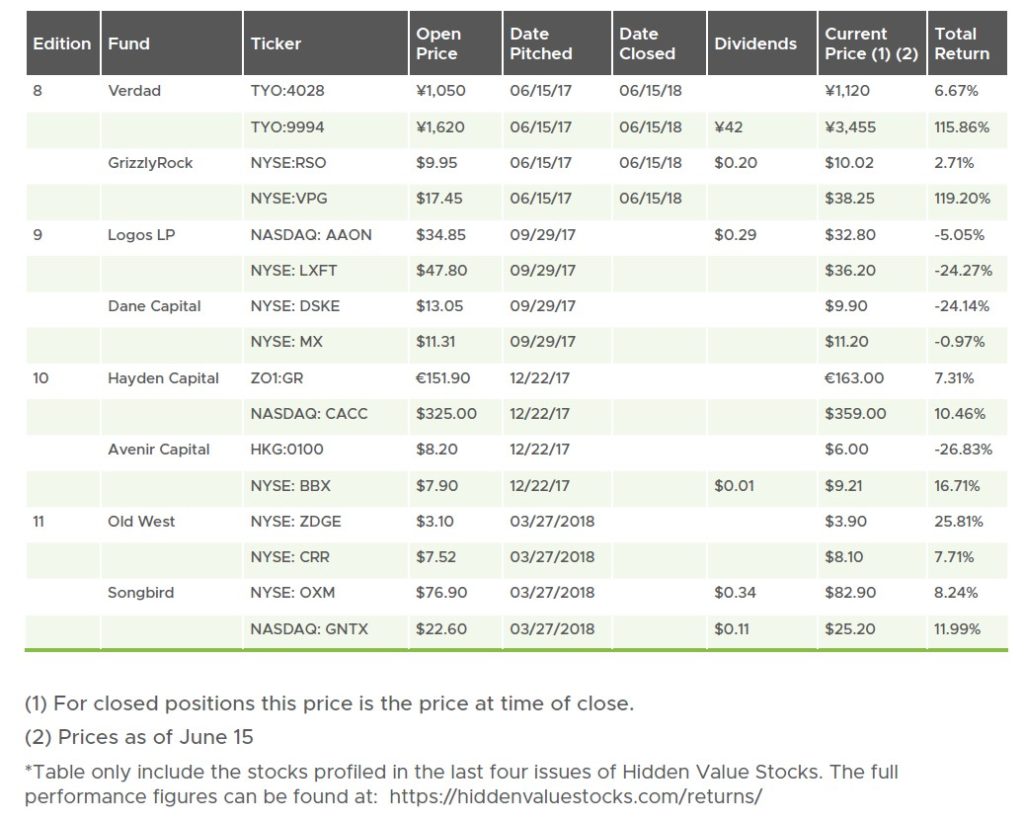 Chuck Murphy is the portfolio manager of Liberty Park Fund, a low-net, absolute return-focused fund. Since 2011 the firm has grown from an initial investment of around $700,000 to assets under management of $85 million today. Chuck and team specialize in finding under-the-radar industrial stocks with limited analyst coverage, which require specialist knowledge to understand. After gaining 3.43% in May, for the year Liberty Park is up 2.09%.

Could you give us a bit of background about yourself and Liberty Park?

Sure. I started Liberty Park back in 2011, and we opened it to external investors in mid-2012. We started with $700k in AUM, but we’ve grown steadily since then and are now at about $85 million in AUM. We have three people on the investment team and one person on the marketing/operations side.

Our fund is a low-net, long-short equity fund focused on smaller-cap industrials that aims to provide equity-like returns without the correlation to or volatility of the broader market. Our universe presents opportunities for us to exploit: below-average, sellside analyst coverage; above-average cyclicality and volatility; and complex or multi-industry businesses that require experience to understand. We also have a unique process that enables repeatable alpha generation.

Before starting Liberty Park, I was a senior research analyst at Sidoti & Co in New York City for about seven years. Sidoti was the largest sell-side research firm in the small-cap equity space, and I covered the industrials sector. What I found over my time at Sidoti was that smaller-cap industrials were a unique ecosystem- they are volatile, cyclical, and much more informationally inefficient than most US stocks. To me, those features make a great ecosystem for an alpha-focused, absolute return strategy (not so much for a long-only, buy and hold one).

We like to say that we’re the foremost experts on smaller-cap industrials in the US, but truth be told, there are few, if any, other investors who consider themselves small-cap industrial specialists.

Can you give us some more insight into your investment approach?

Our investment strategy could probably best be described as variant perception.

We believe that stocks go up when companies deliver fundamentals that are better than consensus expectations, and stocks go down when the opposite happens. As such, we spend a great deal of time trying to become experts on the company/industry to the point where we know “the truth/reality” better than other investors.

“We believe that stocks go up when companies deliver fundamentals that are better than consensus expectations, and stocks go down when the opposite happens. As such, we spend a great deal of time trying to become experts on the company/industry to the point where we know “the truth/reality” better than other investors.

We also want to have a firm grasp of what expectations are baked into a stock. What causes us to buy or short a stock is when we see a situation where investors’ expectations are materially different than the company’s reality; we also try to have a catalyst in mind that will cause investors to realize their mistake, which will in turn, cause the stock price to re-align with reality.

This philosophy/strategy is a product of years of experience as a sell-side analyst, where I was able to watch other investors’ moves, and I was able to monitor what approaches worked and what didn’t. The real world experience was also supplemented by knowledge gained from some great books and commentary over the years by people like Charlie Munger and Howard Marks.

How many positions do you tend to run in your portfolio?

Generally, 50-60, and that’s split pretty evenly between longs and shorts.

One long position you currently own is Daseke, a stock we’ve profiled before in HVS. I am sure our readers would be interested to hear your side of the story?

As your readers are probably aware, Daseke’s plan is to consolidate the flatbed trucking space. We think that with the economy in the late-cycle phase and capital equipment sales very strong, demand and pricing for the movement of that capital equipment should rise significantly.

Additionally, Daseke should be able to improve operations of acquired companies and enhance its margin profile over time as the company scales.

And one company you hold on the short side is Cooper-Standard Holdings. Once again, this is a stock we’ve already profiled, but from a long perspective. So, I’m sure readers would be interested to hear your short thesis?

We’ve actually backed off that short recently. Our original thesis was that Cooper’s products were commodities that will be under constant pricing pressure in a rising cost environment. We also saw downside from Cooper’s exposure to a potential decline in US auto sales. While we’re still not bullish, we think some of its self-help initiatives (sales and margins + new products) will limit the downside.

This is just a short teaser of the latest issue. To find out more about Hidden Value Stocks and to signup for the fully quarterly publication, head over to www.hiddenvaluestocks.com and click “Subscribe Now”