Home Business After No Negative Months in 2017, HF Industry Returns Are Down In...

Halfway through 2018, the industry is producing very mixed results. Just over half of reporting strategies are positive for the year, and average gains are virtually on par with average losses. In many instances, segments that had been doing well in 2017 have under-performed in 2018, and in some cases the opposite is true.

This is not a situation that inspires investor confidence, but we must also remind ourselves to not focus on the short term, and to make sure we look closely at the numbers. For some, large allocations made in 2017 are being met with recent losses (long/short equity), but for others, universe-level declines mask relative outperformance from those accepting large new allocations in 2017 (large macro).

The landscape of the industry is muddled, as one would expect with near flat first-half returns. With net investor flows teetering from one side of zero to the other in recent months, it’s clear investors are waiting, and watching their recent allocation decisions closely.

After No Negative Months in 2017, HF Industry Posts Third Aggregate Decline of 2018 in June

Hedge funds returned an average of -0.51% in June, +0.37% in Q2 2018, and are +0.16% in the first half of 2018. Emerging markets continued to lead to the downside, while managed futures, macro and quantitative equity strategies struggle. 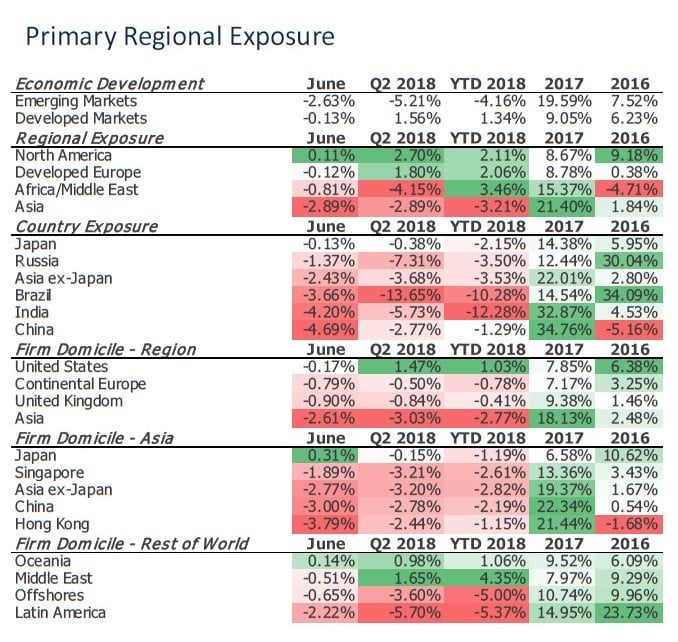