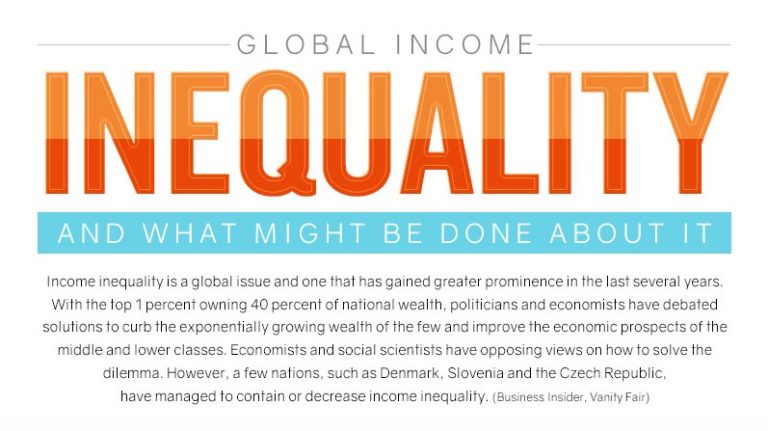 It’s no secret that that the world’s elite enjoys an excessive amount of economic prosperity, while 7 billion people struggle to maintain a decent standard of living and the middle-class has not experienced economic growth for over four decades. Journalists, politicians and public advocates frequently volley opinions across media outlets about who’s right and who’s wrong in this regard.

The richest 1-percent of society has amassed as much wealth as 50-percent the of the poorest populations on Earth, and over the last four decades, the 1-percent – representing 7 million individuals – has acquired 13-percent of the economic growth of the entire planet as well as claimed 27-percent of all the wealth in the world.

Getting to the Root of the Problem

Income disparities contribute to missed opportunities, poor health, increased mortality and poor community bonds. Most studies about economic inequality focus on low-income populations. Alternatively, the World Bank Group conducted a survey in order to discover how the world’s thought leaders perceive the growing disparity between the rich and the poor. Over the last several decades, income inequality has risen. The thought leaders of all but two of the world’s nations view this as a problem in their country, and more than half of the world’s thought leaders believe that this is a monumental problem for their society. This sentiment is even more prevalent among female thought leaders, with 66-percent of women versus 57-percent of men expressing that income disparity is a major issue. Also, only 12-perecent of men believe that opportunity is important for reducing poverty, while 16-percent of women feel the same.

United Nations (UN) representatives express that the nation’s leaders cannot address income disparities before fixing the underlying lack of opportunities that have caused the wealth gap in the first place. Additionally, extreme poverty is a condition that’s difficult to overcome. 13-percent of the world’s thought leaders believe that opportunity equality is the best way to reduce global poverty.

The Nuances of Global Inequality

China, India and Russia are experiencing the fastest growth in income equality. Europe exhibits the lowest rate of economic equality, as shown in the database. Conversely, Brazil, India, the Middle East and Sub-Saharan Africa report the most economic disparity. Researchers long suspected that these nations were the top regions for income inequality, but have only recently gathered the empirical evidence required to confirm this fact.

Unbalanced ownership of national wealth is a considerable catalyst for economic inequality. Either public entities or individuals can own national wealth. All nations have transferred large amounts of public wealth to individuals since 1980. National wealth has increased substantially since then. However, public wealth is negative or close to zero in affluent countries. The United Kingdom and the United States, for example, exhibit the lowest levels of public capital in the world.

Global inequality is stabilizing, but the gap still exists. Unfortunately, economic experts forecast financial inequality to increase in the coming years. Legislative policies, reveal researchers, make a big difference in the economic outcomes of citizens. In China, the bottom half of the population has enjoyed an improved standard of living due to the nation’s policy of infrastructure investments and low-skill manufacturing development. India, however, has limited educational opportunities to the nation’s upper-class. In Europe, the redistribution of wealth through taxes and monetary exchanges has tempered economic disparities. In the United States, however, economic and educational disparities are the norm across generations.

In the future, legislation regarding education, employment, finance and taxes will shape economic distribution among the population. However, public advocates believe that economic growth is the key to reducing income disparities. Supporters hope that economic development will outpace rising income equality and reverse disparities around the world.

Check out this graphic from Norwich University about global economic inequality, and see their programs to learn more.