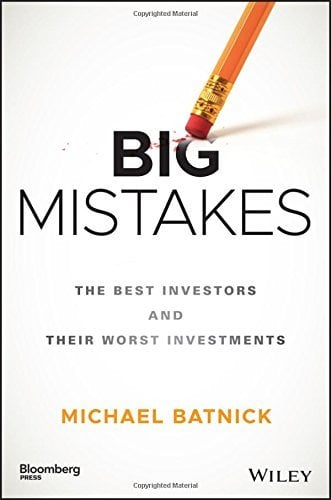 Consistently beating the market is insanely difficult. Whether it’s because the market is for the most part efficient, whether it’s due to the paradox of skill, whether it’s the result of the behavioral bogeymen that prompt us to do the wrong things at the wrong time, whatever the reason, no investor, not even the most successful, remains unscathed. Michael Batnick, director of research at Ritholtz Wealth Management, who admits to having made thousands of unforced trading errors himself, delves into this phenomenon in Big Mistakes: The Best Investors and Their Worst Investments (Bloomberg/Wiley, 2018).

Big Mistakes: The Best Investors and Their Worst Investments by Michael Batnick

In 16 chapters he writes about the mistakes of Benjamin Graham, Jesse Livermore, Mark Twain, John Meriwether, Jack Bogle, Michael Steinhardt, Jerry Tsai, Warren Buffett, Bill Ackman, Stanley Druckenmiller, Sequoia, John Maynard Keynes, John Paulson, Charlie Munger, Chris Sacca, and himself. Even though most of these mistakes are well known to students of investing history, Batnick frames them in a new, for the most part behavioral, way.

He distinguishes between “a lousy investment” and an unforced error. “Your thesis was wrong, or what you thought was already in the price; things like this are all part of the game. But oftentimes, we’ll act impulsively, even when we ‘know’ what we’re doing is a mistake. Few people are spared from unforced errors, and the way they usually manifest themselves is because we can’t handle people making money while we aren’t.” Stanley Druckenmiller, for instance, “played the game at a level few ever have.” He was 130% net long going into Black Monday and still made money in October 1987. And yet even he made an unforced error when he “couldn’t bear to see Quantum grinding its gears as a bunch of small-potato upstarts were racking up huge returns” in the late 1990s and bought $6 billion worth of tech stocks. … [I]n six weeks I had lost $3 billion in that one play. You asked me what I learned. I didn’t learn anything. I already knew that I wasn’t supposed to do that. I was just an emotional basket case and couldn’t help myself.”

Elaborating on a quotation from Livermore and further fleshing out the distinction between a bad investment and an unforced error, Batnick acknowledges the limitations of learning from investing mistakes. “Investing is inherently an act of uncertainty, so we can never say to ourselves, ‘I’ll never let that happen again!’ Sure, there are very specific mistakes that you won’t repeat, like buying a triple-levered inverse ETF and holding it for three months. That’s something you do one time and never repeat. But like Livermore said, the mistake family is too large to avoid all of them. And no amount of market quotes will change the fact that losing money is a part of investing. Risk management is a part of investing. Repeating mistakes is part of investing. It’s all part of investing.” Even so, we can, and should, focus on avoiding unforced errors—errors such as straying outside our field of competence, confusing skill with luck or genius with a rising market, over-concentrating a portfolio (think Sequoia with Valeant or Charlie Munger with Blue Chip Stamps), buying at market tops and selling at market bottoms.

Big Mistakes is a humbling book. Sentences such as “Imagine that you were physically exchanging stock certificates with Jim Simons of Renaissance Technologies every time you went to buy or sell a stock” might be enough to send investors scurrying to buy an index fund. But the lure of joining the pantheon of great investors/traders remains powerful. Batnick may not provide the path to such success, but he demonstrates that perfection is not required. “Mistakes,” as Peter Bernstein once said, “are an inevitable part of the process.”