ValueWalk
Home Business Hedge Funds Returned An Average Of +0.65% In May 2018

Similar to earlier months of 2018, hedge funds were generally positive during the month of May, but there were segments of the industry meaningfully impacted to the downside by notable events.

In May, the re-emergence of European sovereign debt issues caused segmented losses which dragged down both macro and fixed income/credit segments. Despite the reverberation through some strategies’ exposures, the majority of the industry chugged along like it had for much of 2017.

While much of 2017 was spent benefiting from strong markets with many warning of impending negativity, what was missing from 2017 were the events giving substance to the unease. While industry-wide returns in 2018 are below last year’s pace (mostly), it is not for lack of evidence of a difficult marketplace.

Hedge funds returned an average of +0.65% in May, and are +0.84% in 2018. Mixed returns were led by those with developed market equity exposures, while market declines in India, Brazil, and Italy hurt EM strategies and macro funds.

Broadly positive returns belie segmented elevated losses. Outside of those with exposure to events in Europe, and certain EM countries, May looked like many of the positive months of 2017. Nearly 63% of reporting products were positive in May, but the difference between the average positive and average negative returns was the largest in nearly two years.

European sovereign issues show in macro/fixed income returns. It’s important to note that losses were not widespread, but some large losses likely related to volatility in European bond markets dragged down overall macro and fixed income/credit strategies in May. For credit strategies, nearly ¾ of reporting products were positive during the month, but the average return of -0.76% was the lowest since January 2016.

Managed futures losses continue. Aggregate returns showed a third loss in the last four months for managed futures funds, resulting in strategy-leading losses in 2018. Along with underperforming in 2017 (though the largest products did better), and losses in 2016, it is clear that the set of factors impacting global markets are very difficult for many quantitative-driven, trend-influenced approaches to succeed. While this theme is not universal across the strategy, only 30% of reporting products have been able to maintain positive returns this year. 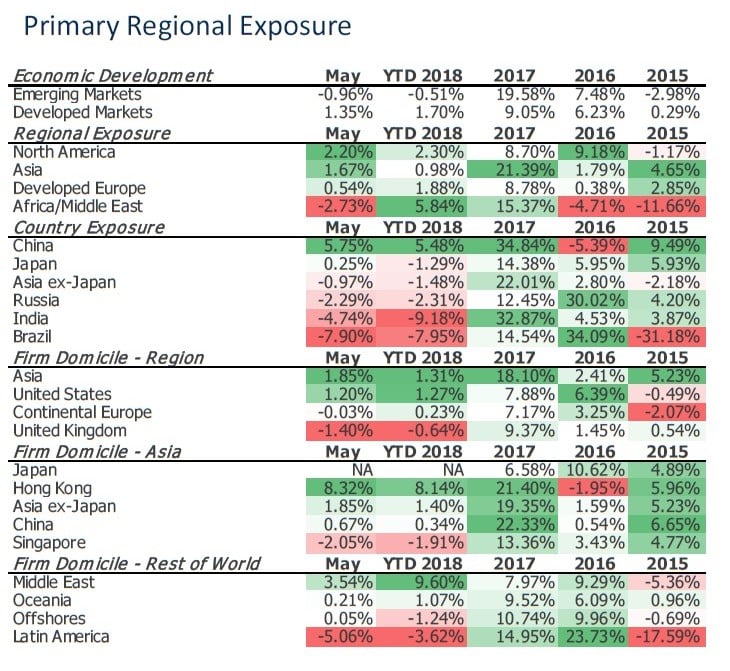