ValueWalk
Home Business While The Risk Of A Global Earnings Recession Grows While Markets Remain... 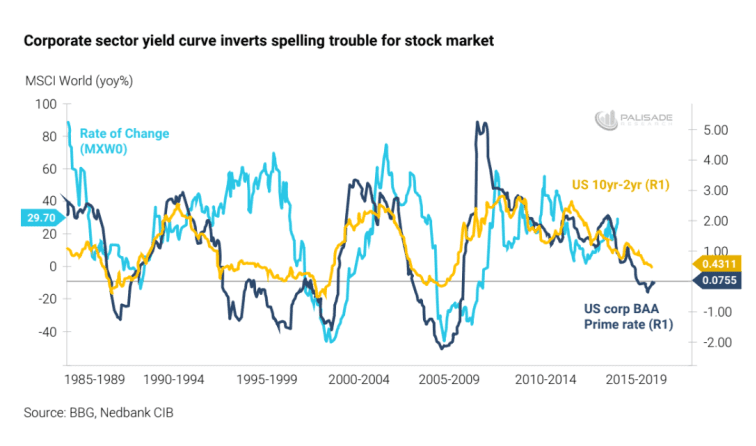 Right when it started to seem like the global trade wars would somewhat settle down – especially between U.S. and China. They suddenly got muchworse.

That’s what happens when everything’s so fragile. . .

For instance, it takes significant time and effort to create a glass vase – but only seconds for it to shatter.

Such fragile things have a negative-time asymmetry (long build up periods – fast collapses).

So, don’t be surprised than if after months of ‘peaceful trade talks’, everything implodes within a couple of days.

Taking the contrarian route – it’s not hard to see that the market isn’t pricing in any potential global earnings issues. And this is troublesome because the risks keep adding up.

I then formed a hypothesis that there will be a collapse in global earnings.

And after using the inverse-probability method – known as Bayes Theorem –  and studying the declining growth in World Trade Volumes, as well as thetightening of central banks worldwide, I concluded that the risk of an earnings recession is far higher than the market anticipates.

And since then, another closely watched signal just triggered – making my global earnings recession hypothesis even stronger.

For the first time since the 2008 Great Recession – corporate bond yields have inverted. . .

And just like the historical accuracy of the 2 n’ 10 Rule – when U.S. 2-year treasuries yield more than the 10-year bonds – this inversion signals trouble ahead for the stock market. It means that “the cost of capital for corporates is now higher than the return on capital.”

Corporate Bond investors are clearly expecting a recession and deflation ahead – which will cause the prime rate to plunge. . .

With the dollar shortage crisis worsening throughout the global economy – this will spill into the stock market and negatively send prices tumbling.

This inversion is telling us something’s very wrong. . .

Also adding to my hypothesis of an earnings recession, Goldman Sachs recently published that the tit-for-tat tariffs between global economies will lead to damaged corporations and nations on every side.

For starters, this would essentially wipe out any gains that the ‘Trump tax-cuts’ gave corporations – although the companies already committed to spending those gains by announcing record-breaking stock buyback plans. . .

The impact of a 10% tariff varies across the main sectors – some being affected more than others. But one thing’s for certain, the weight of the tariff presses heaviest on U.S. imports.

We can see how just a 10% across the board tariff will impact earnings.

But since the SKEG Indicator predicts a global earnings recession, we need to look at the tariffs exposure across trading partners worldwide. . .

Even though the market’s focused on tariffs with China – it’s forgetting that a ‘protectionist war’ with Canada, Mexico (2/3rds of NAFTA excluding the U.S.) and Europe would negatively affect S&P 500 company earnings by over 5%.

Adding all the countries together – that’s roughly 11% decrease in earnings. . .

Trade wars are neither ‘good’ nor something that anyone can ‘win’.

For example, putting taxes against imported Chinese and European steel will affect someone else –  in some other country – somehow. The law of unintended consequences demands it.

We’ve been here before – remember The Great Chicken War of the 1960’s?

In summary, after World War II, the U.S. began factory farming chicken. It went from being a luxury food to something everyone could afford for dinner. Soon, these U.S. companies started exporting cheap chicken all over the world.

Europe didn’t like this too much. And like how all trade wars begin, a few chicken farmers protested to their politicians as the price of poultry collapsed worldwide because of the U.S. exports.

The U.S. poultry business then protested – and politicians retaliated against Europe.

During the 1960’s, the Lyndon B. Johnson Administration imposed a 25% tariff on potato starch, dextrin, light trucks, and brandy. None of these items had anything to do with chicken – but they were all big European exports.

The point was to hurt other European industries like they had hurt the U.S. chicken industry.

The problem was many other nations and sectors suffered because of this chicken fight – especially the Japanese auto market.

Before you know it, the unintended consequences spread and to this day – consumers pay the price for all this.

If only Europeans – and Trump – would read Henry Hazlitt’s simple to understand book, Economics in One Lesson. Then we would all be better off.

The markets today are only focused on the growth side of things – deregulation, tax cuts, and fiscal stimulus. But the risk of tit-for-tat trade tariffs – on top of declining world trade volumes  – is making a collapse in global earnings very likely.

Especially with the corporate yield curve inverting and a worsening global dollar shortage – both will negatively affect stock prices and corporations.

With how fragile things are – markets could be in for a sharp re-valuation downwards if earnings miss by just a small bit.

Just like the glass vase that shattered – it took so long for equity prices to climb this high only to get chopped down in a blink of an eye.