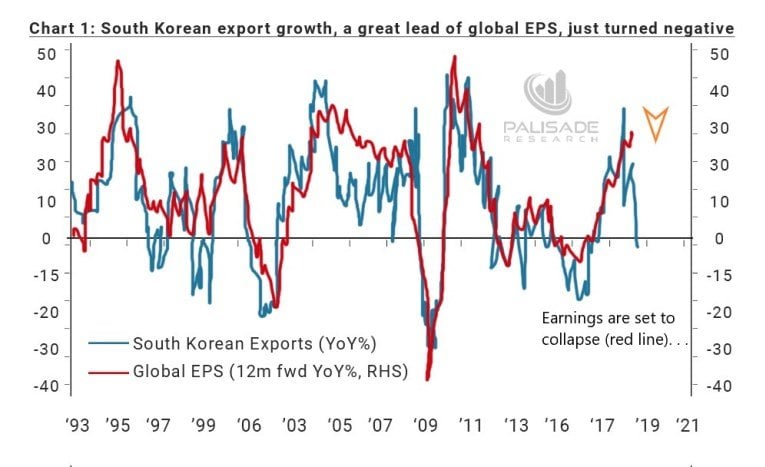 Markets have rallied into summer. The mess in Italy – which hasn’t resolved itself at all – is yesterday’s news.

Within the last two weeks, the VIX is down 35% – investors’ fears are essentially gone.

If you turn on CNBC, you’ll see that the U.S. ‘goldilocks’ economy’s intact, and big names like Larry Kudlow – Trump’s Top Economic Advisor – stating that the U.S. could hit 5% growth.

But, if you take the contrarian approach and do some digging yourself, you’ll see things are deeply troubling – especially with global earnings. . .

Last month, I wrote about the alarming signal coming from the little-used-but-highly-accurate South Korean Export Growth (SKEG) Indicator. It’s telling us that there’s a global earnings recession right around the corner.

Over the last 25 years – the SKEG has preceded each boom and each bust in global earnings. That’s because it’s a leading-indicator – meaning it’s a measurable economic element that changes before the economy starts to follow the trend.

The SKEG is a valuable tool for us to gauge where global earnings are headed.

Yet, the mainstream’s ignoring all this entirely – and that gives investors that care to look between the lines a huge leg-up.

Using inverse-probability – better known as Bayes’ Theorem – we can form a hypothesis first from using the SKEG Indicator – then input relevant data as it comes about.

Therefore, my hypothesis is: due to the historically accurate South Korean Export Growth Indicator collapsing – I believe there will soon be a global earnings recession, contrary to the mainstreams view.

Taking a closer look at the real data that will affect global earnings – let’s look at world trade. . .

The World Bank expects that global growth’s going to decline over the next two years as Central Banks tighten and protectionist policies spread.

Here’s the last three-years of World Trade Volumes – you can see that the next phase of the cycle is lower trade volumes. . . 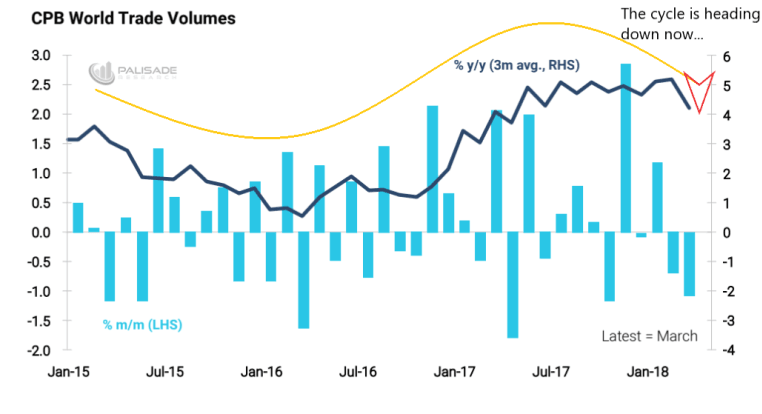 Also, we can assume that slowing global exports means declining imports somewhere else – since they correlate with one-another.

Looking at the ‘alternative measures’ of world trade during the same period – such as air freight traffic and container traffic – there’s also steep declines. . . 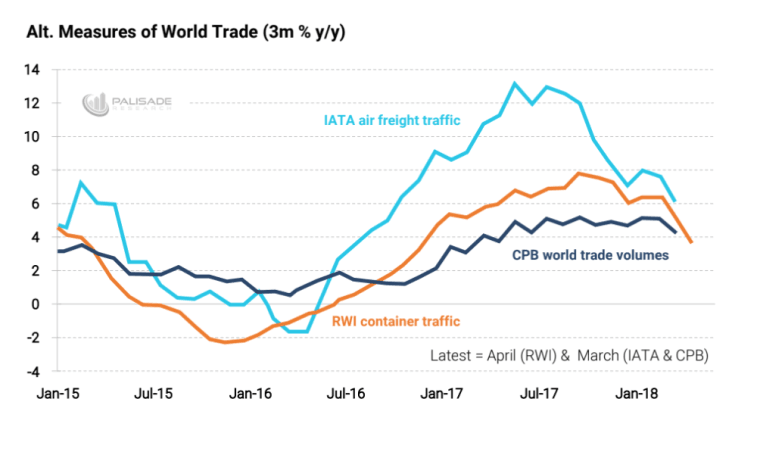 After studying the world’s trade data, it’s not hard to see that the upwards momentum has faded – and things are now in decline.

The market and the ‘CNBC’ narrative is expecting further growth – but from where? As we see, the real data shows that global trade peaked and is now in decline.

The mainstream chooses to ignore the fact that things are slowing down – and it will affect global corporate earnings. As trade declines, companies worldwide will feel it.

The trade data therefore increases the probability that the SKEG Indicator will be correct yet again – bolstering my hypothesis of a global earnings recession.

When trying to forecast, we need to look at something’s expected value and if it has attractive asymmetry (low risk – high reward).

Imagine a scale looking like a see-saw; you have the probability of upside on the left and downside on the right. The more information that keeps coming out today is stacking up on the right side – the downside. And I don’t think there will be any sudden change in this trend. . .

Here are just some of the things adding weight to the probability of a global earnings recession. . .

The elephant in the room is the tightening Central Banks worldwide – especially the Fed. As I’ve written about before, the more the Fed tightens – the more fragile the economy becomes.

Imagine, then, how stressed and fragile things are becoming with the three largest central banks suddenly tightening after years of pumping liquidity into the system. . .

As central banks raise rates and stop their liquidity injections – corporations worldwide will suffer from higher interest payments on their bloated balance sheets. It’s as if investors have forgotten what the ‘I’ stands for in EBITDA (earnings before interest, taxes, depreciation amortization).

All these factors are reasons why I believe the probability of a worldwide earnings recession is highly likely.

Since the market isn’t pricing this scenario in – at all – it gives the contrarian an asymmetric opportunity.

Just don’t let it be said that no one challenged the mainstream. . .