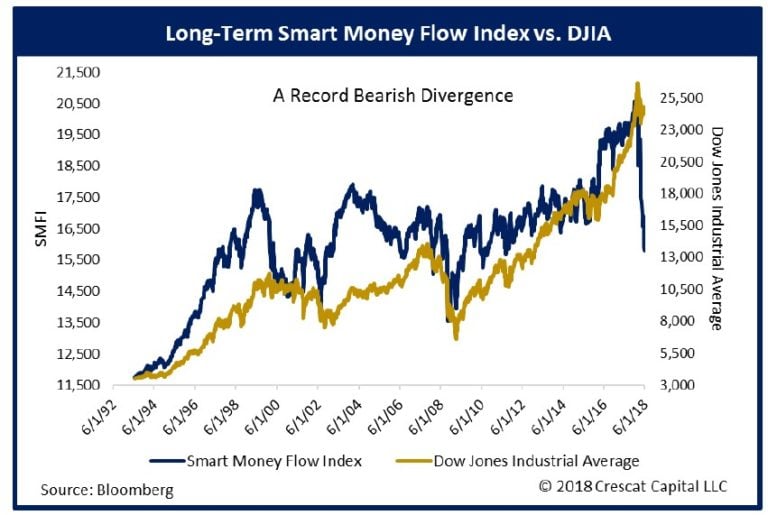 Crescat Capital commentary for the month ended May 31, 2018.

Even as the S&P 500 drifted higher, global financial markets showed major cracks in May. In the face of continued Fed tightening and a strong dollar, various emerging market currencies melted down. Also, the formation of a new populist government in Italy sent Italian bonds into a tailspin potentially reigniting the European sovereign debt crisis. In Crescat’s Global Macro Fund, we profited from promptly shorting Italian bonds and equities last month as the new government threatened to leave the euro currency system and default on its debt. We also profited from emerging market equity shorts in both hedge funds inside our Asian contagion theme. US equity long hedges and precious metals longs also helped us stay positive even though we remained substantially net short global equities in both hedge funds.

Yes, even with another month of record net equity short exposure for Crescat’s hedge funds, Crescat made money in an up S&P 500 market. How can two hedge funds that were approximately 80%+ net short for the month make money in an up market? We made money because not only did many of our long hedges work, but also global equity and overall financial market breadth was breaking down and therefore many of our short positions worked too. Emerging market equities (EEM) were down 2.6%; International developed markets were down 1.9% (EFA); the average macro fund (SG CTA Index) was down 2.4%. Many global bond market indices were also down for May. What this means is that the US stock market is one of the very last markets to hold up, but it is almost certainly topping out and has likely already topped out in January of this year. Just imagine how well Crescat’s hedge funds can do, when the S&P 500 really starts going down. Let’s face the facts. We are essentially at or near the top of the most overvalued US stock market ever. We proved the record valuations of US stocks conclusively across six different major fundamental metrics as of November 18, 2017. We reaffirmed it on January 26, 2018 along with a multi-factor macro model calling for a market top. This was coincidentally and precisely the market top year-to-date for the S&P 500 Index. A 12% correction immediately followed over just ten days. Crescat’s Global Macro Fund increased 11.7% over those 10 days while Crescat Long/Short Fund increased 9.1% as a result of our record net short at that time. That correction into February 8 clearly marked the start of a powerful new trend and the end of a tired bull market.

The divergence of the Smart Money Flow Index (SMFI) from the market since the lows in February and March says it all. It signals another big market down-leg coming near in the near term. 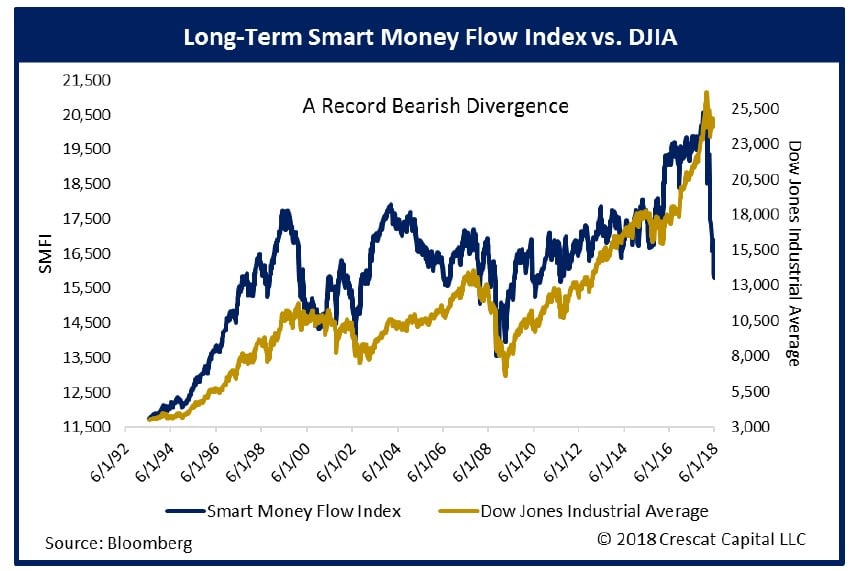 The SMFI measures the gap in price action in the first half hour compared to the prior day’s close, which is typically dominated by retail-investor money flows. That price action is then contrasted with the price action over the remainder of the trading day with most of the action and volume tending to unfold in the last hour of trading. There has been a record divergence of index performance in the first half hour compared to the rest of the day as shown by the SMFI indicator. Essentially what this shows is that retail money is buying and being put to work with a significant price impact in the first half hour of trading while other perhaps more sophisticated investors have been stealthily and persistently selling throughout the course of the day. In and of itself, this indicator is not very useful as it tends to trend in the same direction as the market. It becomes useful as a bullish or bearish indicator when it diverges from the market. That is the case now. SMFI has been going in the opposite (bearish) direction from the market since the Dow and the S&P 500 made their year-to-date closing lows in February and March. Maybe the smart money will soon be proven right. 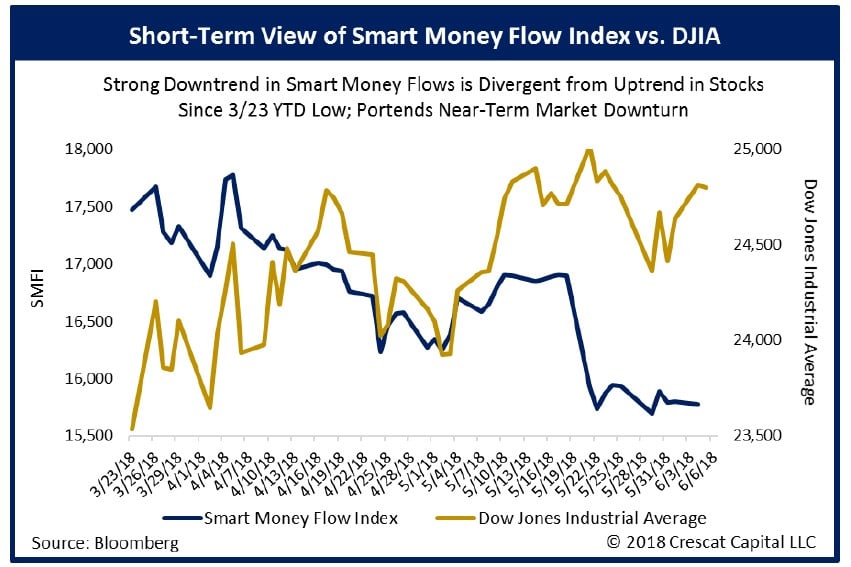 May’s shock currency devaluations in Brazil, Argentina, Russia, and Turkey came out of nowhere to most market prognosticators. Emerging markets have become a crowded trade in the last few years. It looks to us like a new emerging market crisis now upon us, a consequence of Fed tightening, dollar strength, and a global dollar funding shortage. It is also the result of the unwinding of a global speculative carry trade by investors who have been borrowing in lower yielding developed markets to buy securities in higher yielding emerging markets. In our view, the recent emerging markets’ contagion points to the much bigger currency and credit bubble at the core of emerging markets: China. Many have been counting on yuan appreciation to make the China carry trade work. We think they are missing the overvaluation of the Chinese currency and do not appreciate the massive bank non-performing loan problem that will need to be money-printed away. The China currency and credit bust is inevitable in our view and will almost certainly prove to be a reflexive engine for the unwinding of global central-bank-inflated asset bubbles in stocks, bonds, currencies, and real estate around the world. It has created inflation in asset prices everywhere.

Where inflation has been absent, but is now nascent, is in wages and prices of goods and services. This is the real kind of inflation, and it may well be coming, finally, and naturally in sync with the deflation of financial asset bubbles. The set-up today has many similarities to where the US economy was in 1968 and again in 1972. Then, there was a surprise rise of inflation and simultaneous decline in stock and bond prices. 1973-1974 was one of the most brutal bear markets in US history. Very few managers running money large institutional money today were managing money back then. One would have to be 75 years or older and still in the game. If we have another big downturn, many managers today are expecting it to be a deflationary one like it was in 2008. In that type of market, bonds rise but stocks and commodities sink in the so-called “risk-off” trade. But, stocks and bonds can also go down in sync, particularly from today’s dually high valuations. The unwinding of asset bubbles in both stocks and bonds with a rise of inflation is typically what happens when the world loses confidence in governments and central banks, a persistent cyclical phenomenon over the course of world history. Such was not the case in the 2008 downturn. Many investors today may be positioning themselves to fight that last war and probably need to take a longer-term perspective to consider other examples of macro-economic downturns that could unfold today in importantly different ways from the 2008 crisis.

In our view, the Fed has unwittingly made up its mind to burst many different financial asset bubbles globally, perhaps some real estate bubbles too. That is certainly not its goal, but it is stuck between a rock and a hard place. It should have nipped theses bubbles in the bud a long time ago rather than allowing them to grow so large. Now, it is trying to engineer the impossible soft landing, something that has essentially never worked in central bank history. Financial crises have always emerged when the Fed has removed liquidity late in the business/economic cycle. This time will almost certainly be no different.

There are many crises brewing in global financial markets today that are being catalyzed by the Fed, because the Fed is the primary liquidity provider of the global reserve currency. The Fed’s current credit tightening cycle began in late 2015. The beginning of this cycle kicked off with a currency devaluation and stock market implosion in China, a small taste in our view of what it is to come there. China’s unraveling from its still-record, historic credit bubble was postponed when the Fed went on vacation from further rate hikes for a full year until late 2016. But the Fed has had five hikes since that pause, and there is another one due next week. And it has further begun reducing its balance sheet with quantitative tightening, i.e., reverse money printing, which translates to even more Fed tightening. As we showed in our last quarterly letter, global financial crises happen during or soon following tightening of the US dollar credit conditions by the Fed. These crises tend to be particularly bad when it is late in the economic cycle, as it is today, and further when there we have record US stock valuations and record global debt compared to world GDP, as we have today.

The down-move in the S&P 500 and global financial markets in February was substantial. It was a sign of the beginning of a new bear market and the end of aged bull market. It was a serious technical breakdown, the confirmation that we needed to match our thoroughly vetted overall bearish macro and fundamental outlook for many global financial markets today. The US stock market has gyrated up and down since the February shock. Most recently, it has drifted up. The buy-the-dip crowd has stepped in to temporarily stabilize the market in what should prove a classic bull trap, a natural part of a market-topping process. Now, the US equity market is set up for another substantial decline.