The Federal Open Market Committee raised rates for the second time this year, raising the band to 1.75/2.00%. The FED has also upped its optimism for the growing economy forcing many to believe we will see 2 more 25bp hikes this year. We thought it was ironic that the WSJ had an article entitled “Consumers feel pinch as Fed tightens policy,” right next to the rate hike article. So, on one hand they are raising because of the growth, but on the other they are saying the consumer is feeling the effects. Now we know policy acts with a lag, but we would rather the FED admit that we live in a 2-tiered economy, one by which a very select few have benefited immensely, while the majority continue to be saddled with massive debt and debt associated costs. What is obvious to us is that the FED truly doesn’t care about the overall disparity as long as inflation grows just enough, to gradually debase the monetary base. Chair Powell even suggested that inflation above 2% wouldn’t be a worry at this point, yea no kidding, how else do we purge debt…but inflate it away. 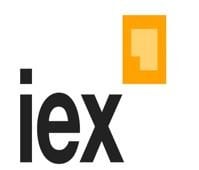 We also read that an SEC study of IEX’s speed bump can help investors protect themselves from HFT predatory activity. Gee go figure, how bout you just ask anyone that has any insight to trading, has traded and understands how order matching systems work. Back in the pit days the majority of bids and offers were solid and upheld, meaning what you quoted is what you got. (If you reneged, you got punched in the mouth and nobody would trade with you) This is not the case with today’s HFT front running algorithmic systems, to put it plainly they can bid and offer at the same level at the same time and do it billions of times a day. What benefit does this give anyone? What protection does this give the investor? How can this possibly be a fair practice when speed is the only determinant to getting an order filled? It can’t and the other falsehood that HFT provides liquidity is patently false, just look at the volumes of Fixed Income government bond market cash trades and you will see. Decades ago the volume per clip were 5 to 7x larger than today. Tell me how that makes sense considering the debt markets are factors larger. Yes, we can chalk some of that up to warehousing, but not all of it. We would rather tell you from the front lines where we have spent most of our career, that HFT can’t be trusted, thus the markets can’t be trusted, thus the markets are no longer markets. Damn that was a mouthful, but we hope you are picking up what we are putting down.

Anyway, without talking about individual markets too much, we will simply post our weekly futures and cash settlements of the markets we follow below. One thing of note was that it was reported that Russia continues to unload U.S. Treasury paper. In one-month Russia dumped half their holdings, which would put their holdings to just under $50 billion. What is interesting is that bonds held up pretty well considering, not only with Russia selling but the FED’s rate hike as well. As much as Russia wants to move out of bonds and into the likes of gold most likely, doesn’t mean the price of metals can’t fall in the short term, in fact on Friday, silver was monkey hammered, Gold as well but not as hard. Is this a new breed of Axis vs Allied all over again? Nasdaq continues to shine, go figure! 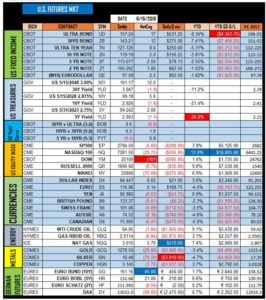 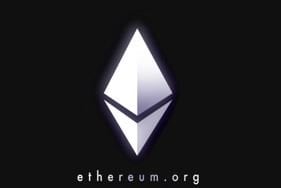 In crypto land a top regulator at the SEC last week gave positive statements regarding the regulation of Ether the cryptocurrency of the Ethereum network. In a conference in San Francisco, Mr. Hinman of the SEC stated “based on my understanding of the present state of ether, the Ethereum network and its decentralized structure, current offers and sales of ether are not securities transactions.” This is certainly good news and should put a break on the recent slide.

Although we are longer term bulls of this decentralized P2P system of block chain, we can’t lose sight of the short term negative aberrations and seemingly lack of excitement in the space. These things take time and usually sideways action, or taking a break is good for longer term prospects. We feel that the investing community needs further confirmation that the ecosystem is growing and is viable, before jumping back in.

We kind of laughed when we read an article from the BIS and their assessment that crypto currencies and their “elusive promise of decentralized trust.” The article found Here is a good read to gain some back ground but their assumptions are trivial at best. What it does continue to tell us is that the battle between centralized and decentralized has just begun. Then again, maybe this is just more evidence of the 2-tiered economies. One by which a very few benefit and thus are beholden to the fiat centralized system and the other by which the commoner would be better served from a decentralized less interventionist system. This will be a battle that will rage on for some time and our guess is a hybrid version is in the offing from our central bank overlords, but in time a fully decentralized trust-less system will be the future, whether the globalists like it or not.

As for this week’s crypto currencies, on average an across the board 20% reduction this week was seen. We would expect current levels to hold for now and a trading range just widened out a bit. New lows were seen in the majority of crypto and this should bring in some decent bottom picking demand. 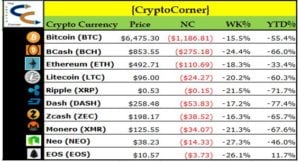 Our Crypto Corner Index posted a loss of nearly $19% and continues to be rejected by our moving average. We will use a close above our red line of death as a precursor to a larger up move. As for now we are sufficiently below and well within a sideways range. 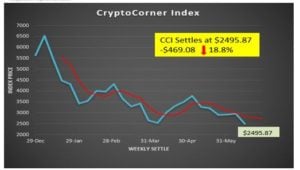 OK, what have we missed, oh yes congrats to the repeat champion at Shinnecock Hills last week finishing a tough week at 1 over par to capture the first back to back U.S. Open victory in nearly 30 years. Also, congrats to Mexico as they beat Germany 1 Nada at the World Cup. Allegedly the victory set off small earthquakes in Mexico, we believe it! Also at the Cup Iceland played to an unexpecting Argentinian draw, more fun to follow we are sure. We also read in the WSJ how baseball attendance has plummeted, well, this may be more substantial evidence of the 2-tier economy and lack of real discretionary spending. Then again, maybe it’s the fact that many are sick and tired of seeing the same teams win, or maybe the salaries have affected the whole professional sports in general as people have come to loathe such things. We love baseball, but we can sense when even the players themselves are all about the money and less about the game, this isn’t singular to baseball either, were just saying…Summer is in full swing and we hope you find time to take a break from the action and take life in. Cheers!

If you would like to receive this newsletter weekly: http://info.capitaltradinggroup.com/ctgs-weekly-unique-insights-newsletter-0-1

Capital Trading Group, LLLP ("CTG") is an investment firm that believes safety and trust are the two most sought after attributes among investors and money managers alike.  For over 30 years we have built our business and reputation in efforts to mitigate risk through diversification.   We forge long-term relationships with both investors and money managers otherwise known as Commodity Trading Advisors (CTAs).