ValueWalk
Home Business How Many People Became Millionaires By Selling Their Homes? 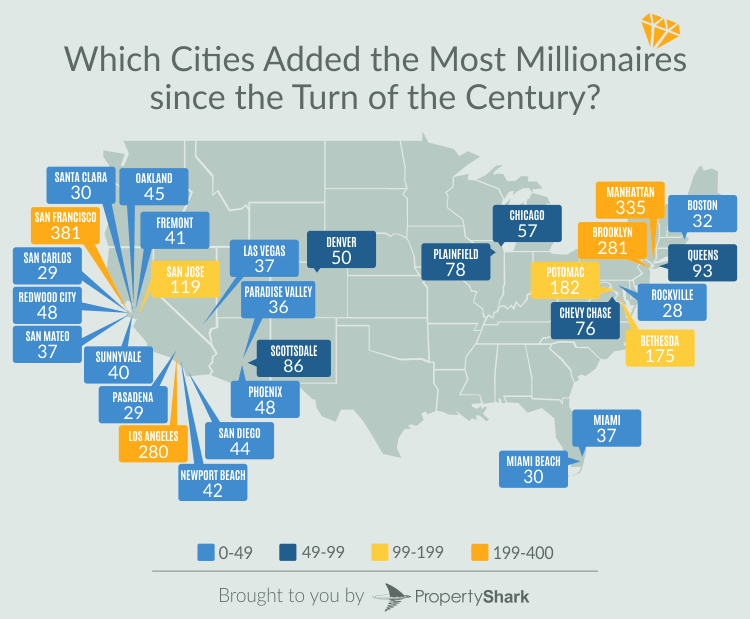 Becoming a millionaire couldn’t get easier, especially if you hadn’t even planned it out. That’s exactly how a handful of people joined the millionaires’ club, by buying their home before the turn of the century for less than $1 million and selling it after for $1 million or more. PropertyShark conducted a research and set up the top 25 list of cities where the most homeowners became millionaires just by selling their home – note that the list actually includes 31 cities, due to a couple of ties.

The year 2001 was strategically selected, as the real estate realm went through its fair share of ups and downs before and after the turn of the century, including the dot-com bubble, and the housing bubble with the financial crash that followed. The New York-based data provider website focused strictly on the real estate aspect in their research piece and did not include the financial status of the homeowners and other wealth factors. Every residential sale from their database (single-family homes, condo and coop units) was included and PropertyShark did not take into account if a transaction was all-cash or financed through a mortgage agreement.

Bustling locations such as San Francisco, Manhattan, Brooklyn and LA landed top spots on the list, but so did Silicon Valley cities and smaller towns on the outskirts of Washington, D.C. and Chicago.

Ever wondered what it takes to become a millionaire? Besides the obvious lottery jackpot, there are a few opportunities and smart investment strategies you can choose from in the hopes of joining that particular club, and if you follow a strict set of rules, you’re destined for success. Alternatively, you can just buy a house in an emerging market and wait comfortably for its value to surge past the $1 million mark.

Real estate investments are considered relatively safe when compared to the stock market, for example, and if you play your cards right, you might end up with a sizeable return. However, strategies like buying houses and flipping them for a profit or investing in rental properties don’t necessarily apply to homebuyers, as most people don’t look at a home purchase primarily as an investment opportunity, but rather as a place to live. Nonetheless, you might end up selling it at one point for a considerably higher amount than the initial purchase price.

We got curious and wanted to see how many people became millionaires by selling their homes since the turn of the century. The timing seemed appropriate, as the real estate realm went through its fair share of ups and downs before and after 2001, including the dot-com bubble, and the housing bubble with the financial crash that followed. The analysis showcases 31 cities (it’s a ‘top 25’ but there are some ties) in which the most homeowners became millionaires just by buying a home sometime before 2001 for less than $1 million, and selling it after 2001 for $1 million or more. We only focused on the real estate aspect in our study, not including the financial status of the homeowners and other wealth factors.

381 Millionaires Land San Francisco the Top Spot in Our List, Manhattan Follows with 335

Those who bought a home in The Golden Gate City prior to the dot-com bubble bursting, and sold it after the market stabilized (and prices started rising again), got great deals on their properties. After 2001, 381 people became millionaires just by selling their homes in San Francisco—that’s a high number, considering San Francisco’s population is half that of Manhattan.

Home prices in SF remained fairly steady during the 2008 financial crisis, and the market wasn’t affected as badly as other major cities in the country, thanks to its tech and start-up scene. After the recession, home prices started rising in the city and empty lots became practically nonexistent, with little possibility of new development.

Additionally, San Francisco is vertically underdeveloped and homes tend to be more expensive than the average Manhattan condo as there are significantly more condos in Manhattan than houses in SF—this being one of the main reasons the borough landed on the second spot on our list. A total of 335 homeowners became millionaires in Manhattan by selling their houses after 2001. Brooklyn followed closely, adding 281 millionaires since 2001, while Queens managed to add 93 millionaires to its roster.

The City of Los Angeles Added 280 Millionaires since 2001

The City of Los Angeles, with a population of more than 3.9 million, made 280 people millionaires since the turn of the century. L.A. isn’t as expensive as some of the neighboring cities in the county, but being spread out with a large number of residents, it’s no surprise it made it so high on our list. Affluent neighborhoods such as Bel-Air, Venice Beach and Brentwood most certainly paved the way for homeowners to become millionaires after selling their properties.

Besides Los Angeles, the only L.A. County city that managed to squeeze into our top 25 list was Pasadena. The city added 29 millionaires since 2001, landing it the 24th spot on our list.

7 Out of Our 25 ‘Millionaire’ Cities are in Silicon Valley

It comes as no surprise that our list is flooded with Bay Area locations, as the median home price in almost every Silicon Valley city exceeds $1 million. 119 sellers traded their homes for $1 million or more since 2001 in San Jose, 48 in Redwood City, 40 in San Mateo and 29 in San Carlos. Scroll down to see the rest of the cities or take a glance at our map above.

Silicon Valley recovered from both economic crises, but prices continue surging due to high demand, and studies suggest that a new tech bubble is poised to burst.

4 Small Cities Outside Washington, D.C., Delivered a Total of 461 Millionaires

Washington, D.C., is an expensive place to live, but so are some of the cities surrounding it, especially those located in Montgomery County, Md. In fact, Potomac and Bethesda landed the 5th and 6th spots in our list, with 182 and 175 millionaires, respectively. The other two are Chevy Chase, with 76 millionaires, and Rockville, with 28. Overall, these small cities can’t compare to powerhouses like NYC, San Francisco or L.A., but they managed to keep up the pace by adding an impressive number of millionaires.

Proximity to the capital city is just one of the reasons prices are high in these wealthy neighborhoods. Some of these locations suffer from low new inventory, and consequently, high prices dominate the outskirts of D.C., and buyers are competing for properties.

Plainfield, Ill., located near Chicago, also made it onto our list, and its situation is similar to the 4 cities mentioned above. With a population of only 43,000, the city managed to add 78 millionaires since 2001.

For further details about the cities, see the table below.

Real estate is an investment choice that has made countless people millionaires; however, success is not always guaranteed. You can buy the right home, at the right time, in the right market and dismiss the possibility that someday you might sell it, but if the need arises and selling becomes an option, the market’s condition will determine how much money you’ll get for a property that you bought 10 or 20 years ago.

The number of millionaires for each city was calculated by looking at homes that were purchased before 2001 for less than $1 million and resold by the same person after 2001 for $1 million or more. All residential transactions (single-family homes, condo and coop units) have been included and we did not take into account if a transaction was all cash or financed through a mortgage agreement. The stats on population for each city were extracted from Census, 2016 dataset.

We only focused on the real estate aspect in our study, not including the financial status of the homeowners and other wealth factors, such as income and savings, before or after the purchase of the homes. The analysis revolves strictly around the sale of the homes that made its owners $1 million or more at the time of the sale.