The culture of workplaces can vary from employer to employer, however does the culture of a city impact the overarching norms and standards of its local businesses? Many people believe that places like New York City house workaholics who clock in long hours just to get ahead of the tough competition found in a congested city. However, does it necessarily mean that those who are working the longest hours are the hardest workers? Many studies have attempted to examine this questions.

RewardExpert – a free service that helps people take full advantage of credit card and travel rewards – sought to answer a less commonly answered question; where do people work least, but earn the most pay? The company’s latest report, set out to determine, by the numbers, the cities and metropolitan areas where people work fewer, better-compensated hours per week

Top Places Where You Get the Most Bang For Your Paycheck

It is a well-known fact that workplace norms and expectations vary greatly from place to place. The question comes up frequently: where do people work the hardest? This may not be an immediately obvious fact, but it is still a relatively straightforward matter to measure. We found it more interesting to ask a somewhat different question: where in the U.S. do workers earn the largest paychecks relative to the number of hours in their average workweek. To wit: where do people work the least and earn the most?

We set out to determine, by the numbers, the cities and metropolitan areas where people work fewer, better-compensated hours per week. We analyzed the March 2018 numbers in State and Metro Area Employment, Hours, and Earnings data set from the Bureau of Labor Statistics to determine which U.S. metropolitan areas have the best-paid workers with the shortest average workweeks.

The metropolitan area comprising Minnesota college town of Mankato and its immediate environs has been featured in one of RewardExpert’s previous reports, in which it was highlighted as being among the best cities for financially burdened Millennials to start their adult lives. The greater Mankato-North Mankato metropolitan area takes first place for having the third-shortest average workweeks in the country. With average wages in the area also substantially above the national average, those hours are remunerative enough that it is possible to live at a decidedly more leisurely pace in Mankato, as a consequence.

The Corvallis, Oregon, metropolitan area is distinguished not only for being centered upon the westernmost city in the continental United States that has a population greater than 50,000. Residents of Corvallis, the county seat and largest city in Benton County, take second place in our analysis for getting the best value for their hours at work. The Corvallis metropolitan area is home to the main campus of Oregon State University, and the area economy is driven by the education, research, and engineering industries.

The Chico, California, metropolitan area is a vital economic hub in the northern Sacramento Valley area of the state. Unlike the workaholics in the entertainment and tech industries elsewhere in California, the inhabitants of the Chico area enjoy a relatively short average work week of 30.6 hours and earn $2.50 more per hour than the national average. Like our first- and second-place metropolitan areas, Chico is home to a major state university, Chico State, making education a leading industry. The area is a regional economic hub with employment in many sectors, and it is known for its small business and retail industries.

The town of Barnstable, Massachusetts, is the county seat of Barnstable County, and with a population of just over 45,000, it is the largest city or town on Cape Cod (the distinction between cities and towns in Massachusetts is highly ambiguous, and is almost entirely a matter of terminology: the largest town is nearly five times as populous as the smallest city). Hourly wages here are a couple of dimes higher per hour than in Chico, and likewise, the average work-week for a Cape Codder who makes the town of Barnstable home is only approximately 15 minutes longer. The town of Barnstable is its eponymous county’s economic and retail hub, however, tourism is the dominant industry in Barnstable, as it is throughout the Cape and Islands region of Massachusetts.

Fifth-place Eau Claire, Wisconsin, is a former hub for manufacturing and industry that has survived the decline, first of the lumber industry in Northern Wisconsin, and then the ongoing process of automation that has caused manufacturing payrolls to shrink. As the major city and regional hub, Eau Claire has reinvented itself to an extent, diversified its economy, and maintained a job base in manufacturing: where once sawmills stood, Eau Claire’s manufacturing sector is focused on tech hardware. That being said, while wages aren’t what they once were, accounting for inflation, they still stand just above the national average. Unusually, for an economy reliant on industry, the average number of hours worked by an Eau Claire area resident in a typical week is only 29.4—the fourth-shortest average workweek out of 387 metropolitan areas.

Located in the heart of Sonoma County’s Wine Country, the Santa Rosa, California, metropolitan area takes sixth-place on our list due to its having average hourly wages more than three dollars above the nationwide average across all metropolitan areas. Santa Rosa also takes its place on the basis of its short average workweek hours of only 31.7 hours for employees in jobs of all stripes. This also compares favorably to the nationwide average of 34.1 hours per workweek. Plenty of time left over, one would think, to hone your tongue’s viticultural virtuosity.

The stretch of the Acela corridor that occupies the space that separates the New Haven, Connecticut, and Providence, Rhode Island, metropolitan areas, is one of only two significant gaps in the densely settled Northeastern Megalopolis (the other being between Aberdeen, Maryland, and Newark, Delaware). The city of New London is home to over a quarter million residents, and among these, there are perhaps a few New York City-employed commuters. The smaller cities of Norwich, CT (approximately 40,000 residents), and Westerly, RI (population of approximately 23,000), combined with the city of New London make up an integrated social/economic region in which wages are on the lower end of the typical range in the region, averaging $28.61 per hour, but the average workweek of area employees amounts to a bucolic 31.9 hours per week. A wide range of industries are represented in the region, with a major contribution from tourism.

The city of Portsmouth, Virginia, one of the chief economic and population centers of the Hampton Roads region of Virginia, comes in at eighth place. This is, perhaps, a bit surprising for a port town with a major naval presence. Average hourly wages in the Portsmouth metropolitan area are just north of thirty dollars per hour: $30.81, to be precise. That’s higher than you will see in all but a dozen metropolitan areas around the country. The average number of hours in a typical worker’s typical work week in Portsmouth is a modest 32.1, which rates Portsmouth-area workers as receiving the eleventh-best value for their working hours.

You can find our ninth-ranked city and metro area smack-dab in the middle of the Central Coast region of California. The San Luis Obispo-Paso Robles-Arroyo Grande metropolitan area is almost equidistant from the Los Angeles and Bay Areas, and accordingly sees average hourly wages that are significantly lower. It is perhaps fortunate that many area residents are well-heeled enough that middle of the pack hourly wages in the region don’t deter them from enjoying the sixth-shortest workweeks in the country, which come in under thirty hours per week, at 29.6. Education, services, and public administration are dominant economic drivers of the region.

We conclude our top ten where we began, albeit in a climate that could not contrast more with first-place Mankato, Minnesota: Santa Cruz-Watsonville, California. This is another metropolitan area whose dominant employer is—you guessed it—the University of California at Santa Cruz, which would, were all of its employees residents of Santa Cruz proper, employ one in seven city residents. The fact of the matter is that, with the second largest employer being the government of Santa Cruz County, the average workweek length is in the bottom decile among all metropolitan areas. At 31.6 hours, it ranks 28th shortest in the country. While, as we all know, wages paid to educators and government employees are governed by budgetary constraints, the area average hourly wage of $27.11 remains respectable as compared to the national average, even if it lags behind its northerly neighbors in Silicon Valley and the Bay Area.

Stretch Your Paycheck With the Right Credit Card

If you’re living from paycheck to paycheck or just trying to save for the future on a limited budget, it can be hard to find the cash for those big-ticket items. But there’s no reason you have to hold off on an expensive purchase.

That’s because there are a lot of credit cards on the market that offer interest-free financing on purchases and balance transfers, allowing you to spread out payments for a year or more. If you pay off the balance before the 0% intro APR period is over, it won’t cost anything extra, either.

Citi Simplicity has the longest introductory 0% APR period for purchases. This no-fee credit card gives you 18 months of interest-free financing on both purchases and balance transfers, plus no late fees and no penalty rates.

If you have existing debt you want to pay down, the Citi Diamond Preferred might be a better option. It gives you zero interest for 12 months on purchases but offers 21 months for balance transfers. You won’t get a longer no-interest period than that.

Earn Rewards and Get 0% APR

There are even cards that let you earn rewards while taking advantage of interest-free financing. That way you can use the cash back you earn to help pay down your balance. 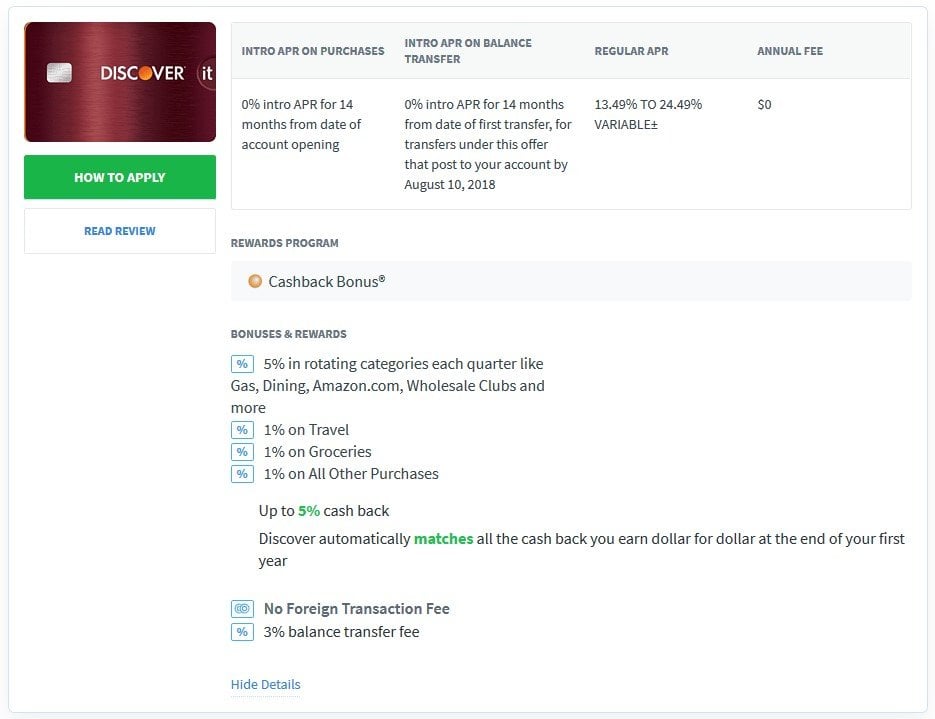 If you don’t want to deal with special bonus categories, and you’d like to get your welcome bonus upfront, the Chase Freedom Unlimited card is an excellent alternative. You’ll get a quick $150 bonus after spending just $500 in the first three months, plus an unlimited 1.5 percent cash back on all purchases. 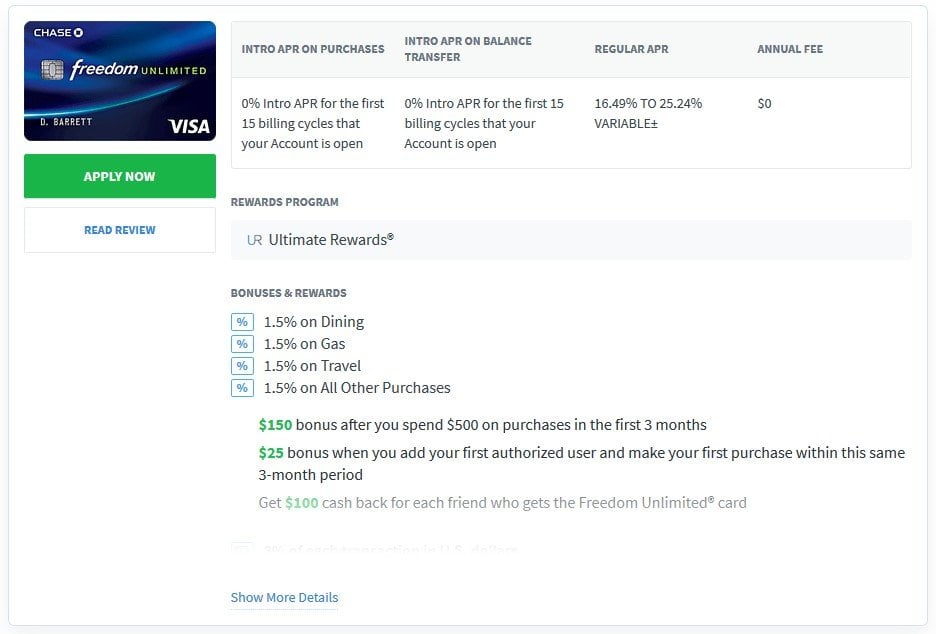 And the interest-free financing? Well, that’s a little longer than Discover’s offer at 15 months for both purchases and balance transfers.

You Don’t Have to Put Off That Big Purchase

There are a lot more cards on the market that offer promotional 0% APR periods. Here’s RewardExpert’s complete list.

Remember, it’s best to pay off the balance before the promotional period is over. If you don’t, your remaining balance will be hit with the standard—and typically high—interest rates that come with credit cards.

For further information and to view the full report, visit the RewardExpert website.

RewardExpert helps users navigate the world of frequent flyer programs and credit card rewards. The free web service provides smart tools and features that enable users to make more rewarding decisions. Through personal finance and travel insights, users are empowered to turn their spending into earning. Find out how to quickly gain rewards while spending less to see more of the world. To get started, visit www.rewardexpert.com.